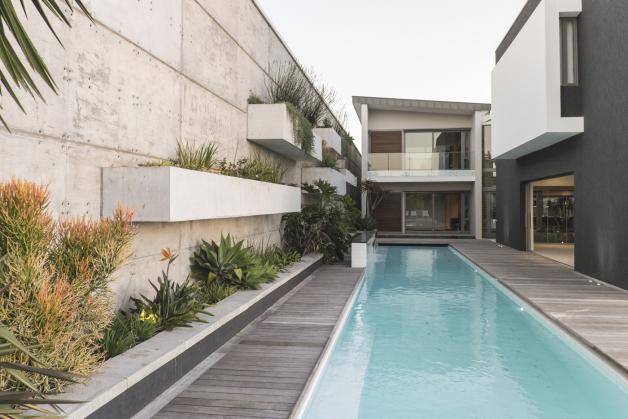 The movers and shakers of the architectural world in South Africa gathered at Shine Studios in Braamfontein on 2nd September to witness the presentation of the 2015/2016 Corobrik SAIA Awards of Merit for Excellence in Architecture to the cream of the profession.

The seven best designs and a book earned Awards of Excellence – the highest accolade to be given to an architectural project in South Africa since the inception of the programme in 1990.

A further seven projects received Awards of Merit, which were first instituted in 1999 to recognize good design or a substantial achievement in the industry. In addition, 16 commendations were awarded for remarkable design.

According to Kevin Bingham, awards convenor and SAIA Vice President, the large number of awards and commendations this year bore testimony to the high quality of the entries.

“We have honoured 31 projects because the standard of design warranted it and because this year we had so many entries to choose from – a record 66 which is the most received in the 26-year lifespan of the awards. South Africa may be geographically remote from many of the world’s major cities but architectural design in this country can hold its own with the best internationally.”

This year’s judging panel was headed by Bingham, who is also a director of FGG Architects in Durban; and included sponsor representative Musa Shangase, who is commercial director of Corobrik; Mokena Makeka, who is founder and principal architect at Makeka Design Lab in Cape Town; Prof Paul Kotze, who is professor of Wits University’s School of Architecture and Planning; and eminent layperson Sumien Brink, who is editor of VISI magazine in Johannesburg.

“This is a star-studded event where we recognise South Africa’s foremost architects,” said Obert Chakarisa, CEO of SAIA. “The architectural profession has reason to celebrate when we see designs being produced of the calibre of the entries we have received this year, many of which easily merit the description world-class.”

“The awards give us a snapshot of the status of architecture in the country and it would be remiss of us not to mention that we would have welcomed more entries that tackled the current widespread social issues associated with affordable housing and the redevelopment of inner cities. It was, however, encouraging to note that a large number met the sustainable design imperative.”

Musa Shangase of Corobrik said that the developing rainbow nation that was South Africa presented unique challenges for the architectural profession which in turn offered opportunities for thinking out of the box and for innovative and unconventional solutions.

“Limited budgets, which often apply to public buildings that need to meet a variety of needs, can act as a catalyst for great design which is fit for purpose and complimentary to the landscape,” he said.

“The inspired use of building materials is also becoming a feature of modern South African architecture and, as the leading suppliers of clay brick in this country for the past 112 years, we are delighted to be a part of this pattern.”

“Our longstanding support of SAIA is a mark of our respect for the architectural profession in this country and we have every expectation that our paths will continue to be linked for many years to come.”

The keynote address at the awards dinner was given by Mziwonke Dlabantu, Director General of the national Department of Public Works.

Tshwane winners are highlighted below,

Awards of Excellence (see Snapshots below);

House La Lucia, KZN: The team at designworkshop: sa described their award-winning house at La Lucia in this way “ …the project explores its potential in the caves carved out of the coastal rock by the persistent erosion of the sea, to be hollowed-out solid rather than a lightweight form, a piece of nature rather than a building.” The judges expressed their deepest respect for the brilliance, commitment, craftsmanship, attention to detail and the professional and inspired co-operation that must have existed between the client, builder and the architect.

Military Health Base Depot for SAMHS, Thaba Tshwane, Pretoria: Creating this 30 000m² new building was a long and complicated process for Jeremie Malan,Architects. The combined professional team employed roughly 100 people with 1 500 construction workers on site.  The site had a whole collection of historical structures many of which.  had to be retained and restored in terms of heritage legislation.  Specially commissioned artworks were used all over the more public spaces.  The judges said, “What has been created here is an environment of sustainability, efficiency, robustness and enduring delight and intrigue”.

House van der Watt, Waterkloof, Pretoria: Nostalgia for the quintessential ‘Farmhouse’ informed the choice of architectural form, plan typology, materials and tectonic expression in this design by Slee & Co.  The judges detected a certain playfulness and ‘lightness’ in the design of the building, despite its intense seriousness and gravitas.

House Pretorius, Constantia: Metropolis Architects designed this house on a site which is the proverbial clearing in the forest.  The adjudicators commented that the whole building exuded a quiet and reserved “lightness of being” and that “this light and tranquil building places all place emphasis on man’s restorative relationship with nature.  Nature is the ultimate ideal – while the architecture of this house follows its rules.”

17 Glen Avenue, Higgovale, Cape Town: StudioMAS describe 17 Glen, situated just below Table Mountain, as “a sanctuary for life itself”. The judges called it a benchmark of restraint which enabled poetry and spiritual influence to flow from it, a self-contained and consciously sculpted form.  “It creates the impression that it is at one with and equal to the large boulders of Table Mountain sandstone that defines the character of the site.”

‘Malapa’, Fossil Cave Cover and Visitors’ Platform, Cradle of Humankind: Krynauw Nel Associates said that the structure ‘designed itself, a remark the judges believed could only be made when the architect listened closely, creatively and with foresight to the client and to the clues of a momentously important UNESCO World Heritage Site. They said the architects found their inspiration in the nature of the scientific work done on this site.  “The nature of the human skeleton became the frame of reference for this insect-like structure.  Fossil shapes have been used in the finer detailing of the steel structure. This ensures that the structure offers an educational experience as well.”

Number 1 Silo: Alan Gray headquarters, V&A Waterfront, Cape Town: Relishing its role of being a ‘background’ building, where public space and the pre-existing are hierarchically more important than it is, the shape and form of this corporate building are informed by the decision to make the 1920’s grain silo (and home of a future art gallery) the dominant element in the local context.  The judges said the architects – Van der Merwe Miszewski Architects in association with Rick Brown Associates – had realised their intention that “the building’s conceptual foundation and façade resolution be informed by the integrity of the industrial and historical V&A Waterfront buildings, giving priority to practicality over image”.  They felt the design had achieved levels of perfection unseen before in their oeuvre and generally in South Africa.

Eclectic ZA Wilhelmiens:  “Eclectic ZA Wilhelmiens: a shared Dutch built heritage in South Africa” is a publication that is the culmination of years of dedicated work.  The judges felt it showed what a rich architectural history South Africa had, how under-researched it was and that academics of the stature of the editors – Bakker, Clark and Fischer – could make a contribution to all of us ‘to know our past’.