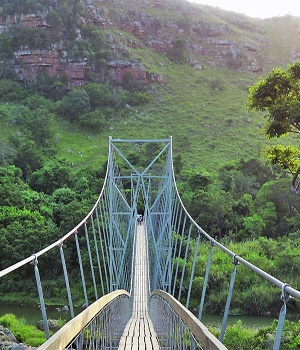 Two rural Eastern Cape communities separated by a perilous river have been reunited by a new bridge built by the community and designed by students. Garreth van Niekerk speaks to some of the people behind this game-changing project

It was already heartbreaking for me this week to discover that at least one child a year used to die while trying to cross the Mzamba River in the Eastern Cape on their way to school. Then there were the desperate adults trying and dying to get to the other side. But what made it even worse was when I found out that it took the work of foreign architecture students to solve the years of trauma that the situation had inflicted on this neglected rural Pondo village.

The awe-inspiring Bridging Mzamba project by the Austria-based nonprofit organisation for architecture and development, buildCollective, took years of research, community engagement and fundraising to realise, and today an ingenious, environmentally-friendly 140m suspension bridge stretches from one side of the community to the other.

The team made the most of the lack of access to the site by creating a self-building process with community members, which not only created jobs and upskilled the community, but resulted in a low-maintenance structure, adapted to the conditions of the natural landscape and forces of wind.

I spoke to Marlene Wagner – a founding member of buildCollective – from Austria, ahead of the announcement of the Afrisam-SAIA Award for Sustainable Architecture at the end of October, which this project has been nominated for.

The project came about after Wagner and the team experienced firsthand what it was like to go in search of a child who had drowned in the river. Their team had been working at a school in the Mzamba area when residents approached them for help, explaining other horrible situations being wrought by the river.

“People recounted many incidents, for example that of Mavis Dlamini – the school’s caterer – who nearly drowned when the water level was high and she tried to cross it by boat,” Wagner says.

“Besides not being able to access work, education or food supply, one of the biggest challenges is to get to medical care on the southern side of the Mzamba River. I think circumstances like that are just not right in a democratic South Africa and people need to be aware of these situations in the rural areas.”

The residents explained that they had received no help after approaching government, ultimately forcing them to look for assistance wherever they could find it.

Nonhle Mbuthuma, spokesperson for the community, explains: “Our community is used to not getting anything from government, but in contrast to other places, we are not burning cars or rioting. We rather reach out and try to find new ways because we know government is not able to provide for all.”

As such, Wagner tells me, the whole R3-million project was funded through sponsors, donations and personal commitment from the partners – an often-unseen funding model in the South African built environment.

“Material and side costs of about €130 000 (about R2.06 million at R15.68/€) were received by private sponsors and some public development funds by different Austrian provinces, as well as other companies from the construction sector, which also helped out with tools. But foremost, the project was made possible with the donated expertise of engineers in Europe and South Africa, the committed team and volunteers of buildCollective and Carinthia University of Applied Science, members of the community steering committee and all the people, organisations and suppliers whose names can be seen on the signage of the Mzamba Bridge. Without their trust in our work, there would not be any bridge.”

The bridge has been nominated for an Afrisam-SAIA Award, along with other inspiring projects such as the Malawi School by Architecture for a Change, built out of shipping containers, and Ultimum Refugium by Ntsika Architects, who describe their project as a “living museum” dedicated to refugees. The epic Ultimum Refugium structure – a collaboration between South African architect Nadia Tromp and Costa Rican filmmaker Elda Brizuela – is completely mobile and able to be moved and erected in public spaces around the world.

These kinds of projects are creating new ways to imagine architecture and sustainability in Africa.

“The bridge is connecting villages and families and can now be crossed even at night. It is now much easier to get groceries home and kids have access to school every day – which really improves their quality of life and further supports the local sustainable tourism industry,” Wagner says.

“I believe a lot of people living on the south coast did not know what was happening in that area, but are now visiting – so it brings people together, exactly what a bridge should do.”

– To see the list of projects nominated for the Afrisam-SAIA Awards for Architecture, head to4tmrw.co.za. Also, like buildCollective on Facebook and check their site buildcollective.net for the rest of this team’s projects, and get involved where you can.