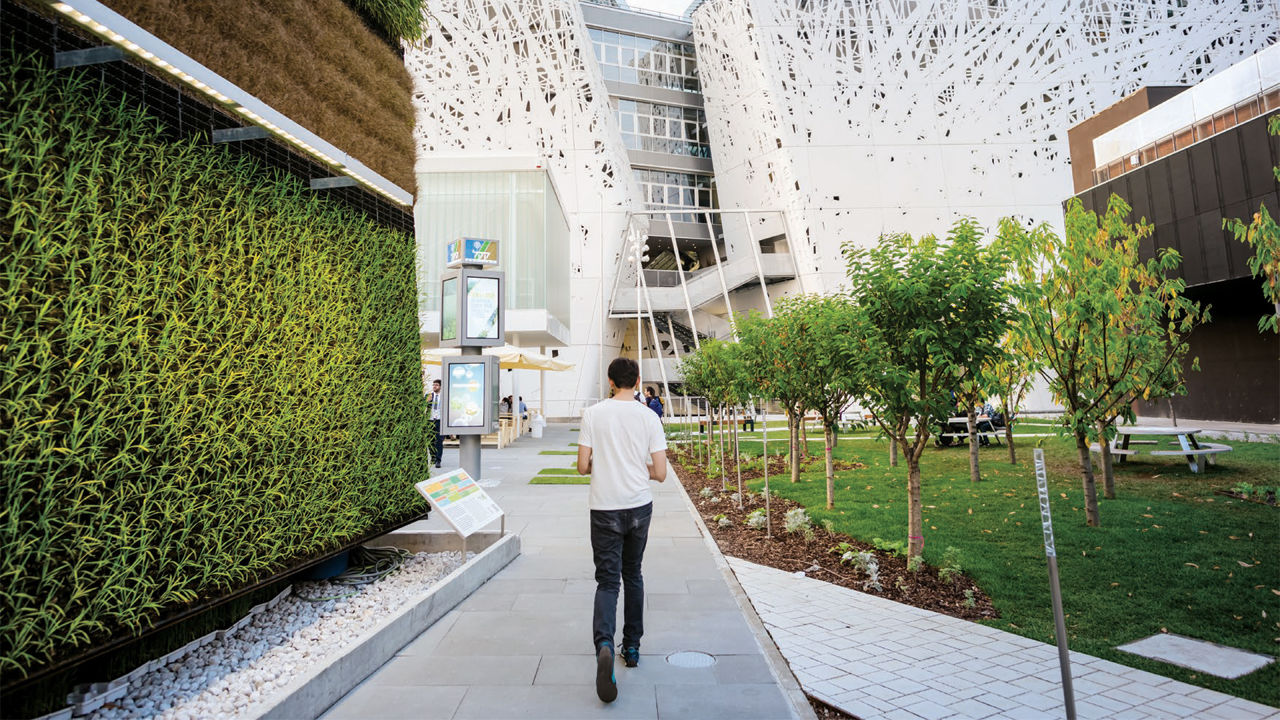 Measuring how building greenery dissipates all that is terrible about city life, including noise, pollution, and sweltering heat.

When architects release yet another rendering of a building plastered in plants or trees, critics are quick to ask if it’s greenwashing: Do plant-covering skyscrapers really help make cities more sustainable?

A recent report from the global engineering firm Arup makes the case that they do, and that as cities get denser—squeezing out more green space at street level—it’s even more important that buildings have built-in greenery to help suck up carbon, filter air pollution, dampen noise, and keep cities cooler. In a typical urban street canyon, there might be little room for a park, but acres of space on high-rise facades.

In some cities, green facades can play a role in reducing the urban heat island effect. On hot days, buildings and roads radiate heat, making cities much hotter than less-developed areas nearby; as climate change pushes temperatures up, and cities get denser, that problem will grow. Heat waves are expected to triple in New York City by 2050, and triple again by the 2080s.

Plants cool cities by absorbing sun, shading buildings, and through evaporation. Arup engineers modeled the effects of greenery in various cities and found that green facades help most in very dense, tall neighborhoods, like the center of Hong Kong, where the facades could lower peak temperatures as much as 10 degrees Celsius. In more sprawling cities, like L.A., it’s more useful to plant greenery at street level; green facades are also less helpful in cities that already have plenty of parks.

The designs can help keep buildings cooler as well. In Singapore, theCapitaGreen office tower uses a plant-filled facade to reduce heat gain by 26%. A tropical forest planted on the roof provides more shade and fresh air, sucked in through tubes to the offices below.

In dense street canyons, green facades can also help filter air pollution. Particulate matter (pollutants like soot) can drop from 10%-20% on a block, depending on the configuration and height of buildings.

Plants on buildings can also make cities seem less noisy, since sounds are more likely to bounce off hard surfaces. In modeling the effects on different types of blocks, the engineers found that facades could reduce sound levels as much as 10 decibels, working best at a distance from the source of the noise. The impact is highest at night, when ambient noise drops and other sounds—like a motorcycle a block away—seem louder.

The report points to other research backing up the benefits of more green infrastructure. Green roofs (and to a lesser extent, green walls) can help collect stormwater, relieving overworked sewer systems. Like plants anywhere, plants on buildings can capture carbon from the atmosphere. Greenery can help make the people looking at it happier and more productive.

Greenery on buildings can provide new habitat for wildlife; Arup specialists suggest that we start thinking about walls as “urban cliffs” that can become part of new wildlife corridors. Some green walls—like those on a building covered in algae—can also become power sources.

The report argues that all city infrastructure, from streets to open spaces needs to be redesigned to prepare for the future. But planners shouldn’t forget about using building surfaces as a resource. As they write:

Green building envelopes can contribute significantly and thus become a default design approach for building design. This will require a significant rethink of current design considerations, but if we can make health and well-being a starting point for all building design, we can shape a better world.

Have something to say about this article? You can email us and let us know. If it’s interesting and thoughtful, we may publish your response.

The source of this article : Fast Company

For more on this visit: www.fastcoexist.com or click here