Uniting the built and natural environments 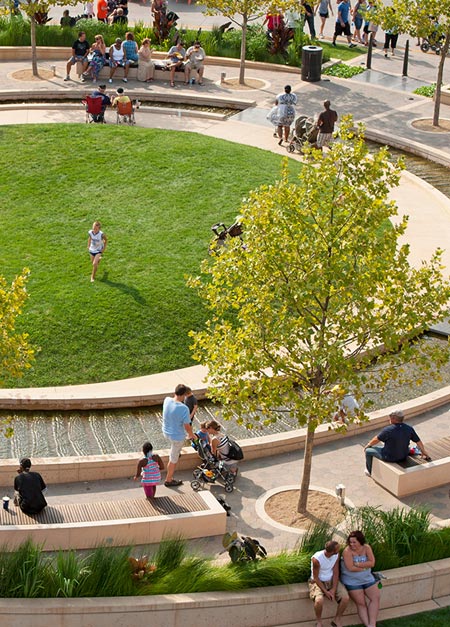 Deutsch complained that too many landscape architects still offer a laundry list of sustainable features when they discuss their work instead of focusing on real benefits. “We need to move to talk of benefits. For example, we can say a landscape captures this percent of stormwater, sequesters these many pounds of carbon, or saved thousands in energy use.”

To achieve performance and then collect these kinds of numbers, more landscape architects need to “integrate measurable performance metrics into the front end of the design process.”

To promote this approach, the LAF has built up the robust Landscape Performance Series, which includes a fast fact library, with data pulled from various credible journals; a set of benefits calculators; and, lastly, an inventory of over 100 case studies, which offer comparative before and after images, benefits data, and, to be transparent, information on how that data was collected and measured. “We also include information on lessons learned — what didn’t work.”

Deutsch and her team spend upwards of six months with landscape architecture firms and clients to put together a case study. Developing metrics and collecting and synthesizing data is a time-consuming process. “Choosing the right metric is important.” Deutsch called for using “defensible metrics, not necessarily peer-reviewed or published.”

The case studies offer a range of environmental, social, and often economic benefits. For example, the client and design team for Uptown Normal’s Circle and Streetscape in Normal, Illinois, a highly successful new town square and traffic circle, found that “104 new trees planted on site sequester 10,790 pounds of carbon.” And also, they found that the new landscape “increased property values in the Uptown tax increment financing district by $1.5 million (or 9%) from 2009 to 2010, a 31 percent increase from 2004.”

In another case study, the client and design team for the General Service Administration (GSA)’s new Coast Guard Headquarters in Washington, D.C. found the landscape’s set of terraced green roofs “retains up to 424,000 gallons of rainwater, which is equal to the 95th percentile storm event.” The site’s new social spaces are being used: “336 distinct individuals observed using the courtyard over a 6-hour period.”

But she admitted some of the data is preliminary at best. And it’s easy to conflate causation with correlation. For example, one could say that a new park reduced neighborhood crime by 50 percent if one looked at crime logs before the park was created and then after the park launched and found crime went down 50 percent. But that’s leaving out many other potential causal factors that perhaps weren’t well studied. The park could have come with additional security guards, or the police could have increased their patrols in the area during the construction process, or the buildings around the park could have been redeveloped as pricey condos. Deutsch said “misusing data is possible. But we have to start somewhere. And it’s important to always cite the specific context of the data,” rather than generalizing it.

In the coming decades, Deutsch thinks even better data will come. She sees every landscape architecture degree program teaching landscape performance as part of an integrated design process, and performance calculations included in licensing exams. “I see this approach integrated into practice and the standard procedure.”

To make the case study development process easier, LAF will release a guidebook in 2017.