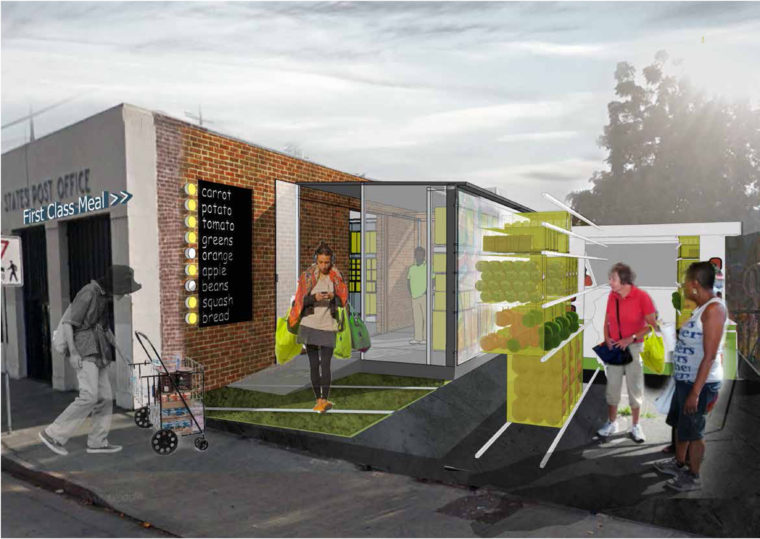 If the sharing economy indeed is revolutionizing how consumers engage services and utilize resources, could it also help to solve the problem of hunger?

Today, more than 40 million Americans lack reliable access to nutritious, affordable food. Yet roughly one-third of U.S. food supplies simply go to waste. Now, a team of students from Washington University in St. Louis is hoping to address both issues with First Class Meal, a prototype program that would improve food access and equality by pairing mobile technology with the physical resources and distribution networks of the U.S. Postal Service (USPS).

“We want to connect underutilized capacity within the postal system — building space, trucks and human capital resources — with the desire for increased reach and food storage capacity within food banks and agencies,” Samarajiva said. The project “has the potential to reinvigorate the USPS and more strongly define its role as a community resource while strengthening the existing network of community food providers.”

On Jan. 10, First Class Meal was named winner of the international design competition Urban SOS: Fair Share. The group was selected from a field of more than 80 teams representing 31 countries. Samarajiva, Zhang and Javed will receive a cash prize of $7,500 as well as up to $25,000 in cash and in-kind staff support to implement their proposal.

The group centered its work in Los Angeles. Though the city and county boast dynamic food cultures and proximity to California’s productive farmlands, more than 1 million residents currently lack food security — the highest such concentration in the nation. Nonprofits such as Chefs to End Hunger and the Los Angeles Regional Food Bank face great demand but limited warehouse space. Meanwhile, in recent years, dozens of local postal branches have been reviewed for possible closure or consolidation.

Samarajiva, Zhang and Javed propose adapting those branches to collect, store and distribute food. When items are ready for pickup, local residents and area food banks could potentially use a mobile app to notify USPS workers, who would then collect — and perhaps even deliver — food items alongside mail. Other services might include classes, farmers markets, CalFresh application assistance and even growing food on site, through community gardens and rooftop farms.

“First Class Meal does what the best sharing opportunities do — it identifies excess capacity from one person or organization and makes it available to another one in need, creating a symbiotic relationship that improves the success and efficiency of both partners,” said Linda C. Samuels, associate professor of urban design, who served as faculty advisor. “That symbiosis results in more profitable organizations and, ideally, a more equitable distribution of resources.”

Urban SOS is sponsored by multinational engineering company AECOM and the Van Alen Institute in partnership with 100 Resilient Cities. Other finalists — working to solve challenges in Athens as well as Durban, South Africa and Quito, Ecuador — include: Monash University, Harvard, California at Berkeley, Oxford, Columbia, The New School and Universidad Politécnica de Madrid.

First Class Meal, a design proposal by Anu Samarajiva, Lanxi Zhang and Irum Javed, has won the international design competition Urban SOS: Fair Share. The project demonstrates how the physical and network resources of the U.S. Postal Service might help address the issue of food insecurity. (All images courtesy of the design team.)