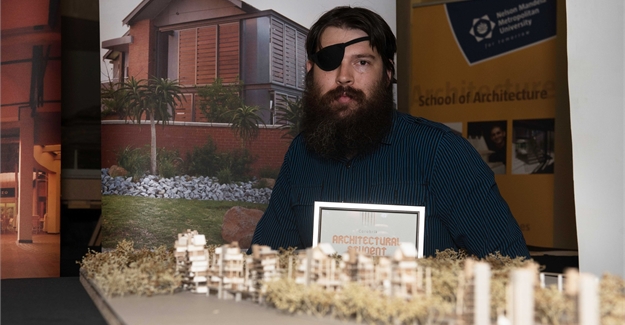 Sustainable building is a mindful approach to energy and ecological conservation in the creation of the built environment. It demands architectural design that aims to minimise negative environmental impacts through efficiency and balance in the use of materials, energy and development space.

In the 30th Corobrik Architectural Student of the Year Awards, South Africa’s best architectural students from eight major universities are identified based on their final theses and presented with awards at regional events. The winners of each of the regional competitions then go on to compete for the national title and a prize of R50,000 at the Corobrik Architectural Student of the Year Awards which this year will be held in Johannesburg in May 2017.

Mike Willard, Corobrik sales manager Eastern Cape presented the awards to the winning students at the Nelson Mandela Metropolitan University in Port Elizabeth. Mario van Wyk was named the regional winner and won R8,500, Alana Changfoot won second prize of R6,500, while Scott Lenton received the third prize of R4,500. A R4,500 prize for the best use of clay masonry was also presented to Reginald Grobler.

Mario van Wyk’s thesis is entitled Horror in Architecture, a romantic exploration of the exquisite corpse analogy.
Van Wyk says, “As a by-product of the urban environment we are left with open undefined spaces between developed areas where the accumulation of infrastructural layers exists such as storm water channels, railway lines, natural invasiveness and even ruins of old industrial remains. These kinds of spaces, create urban barriers and breeding grounds for criminal activities.”

His thesis harnesses the romantic and functional qualities of such an area, converting it into a progressive system of human habitation with an innovative housing model.

Reginald Grobler designed a mixed-use development in Windhoek’s central business district in Namibia. He proposes a development on a site famous for becoming the first commercial brewery in Windhoek. The building is dilapidated and Grobler’s thesis proposes retaining some of the old sections with significant heritage value while extending the facility to provide a venue for arts and community work. He has incorporated clay masonry inspired by the use of brick in existing structures which will become a continuation of the structure in a contemporary sense.

Willard said, “It was clear during the judging that the student architects recognise that the choice of building materials has significant long-term implications for environmental impact. Building materials that are generally considered to be ‘green’ are those that are durable, non-toxic, reusable, energy efficient and low maintenance. As brick manufacturers in South Africa for more than a century, we can say with confidence that our clay face brick has all of these attributes as well as being aesthetically pleasing and providing a healthy and comfortable living environment.”

“In addition, most processes in the manufacture of Corobrik clay bricks are in line with stringent local and international standards which place a high premium on sustainability.”

“These are factors which aspiring architects need to take into account when creating new additions to the built environment in South Africa ensuring that their projects are socially responsible as well as functional, engaging and in harmony with the surrounding landscape. The designs we are seeing demonstrate this awareness which augurs well for the future of South African architecture.”

Pictured here: Mario van Wyk from the Nelson Mandela Metropolitan University is the regional winner for Corobrik Architectural Student of the Year. His entry is entitled Horror in Architecture.