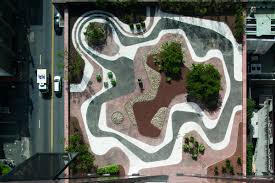 Roberto Burle Marx (August 4, 1909 – June 4, 1994) was a Brazilian landscape architect (as well as a painter, print maker, ecologist, naturalist, artist and musician) whose designs of parks and gardens made him world famous. He is accredited with having introduced modernist landscape architecture to Brazil. He was known as a modern nature artist and a public urban space designer. His work had a great influence on tropical garden design in the 20th century. Water gardens were a popular theme in his work. He was deftly able to transfer traditional artistic expressions such as graphic design, tapestry and folk art into his landscape designs. He also designed fabrics, jewellery and stage sets.

He was one of the first people to call for the conservation of Brazil’s rainforests. More than 50 plants bear his name. He amassed a substantial collection of plants at his home, including more than 500 philodendrons.

Pictured Here, This building’s mineral roof garden, created in 1983 at The Jewish Museum , is one of the artist’s most recognizable, and graphic, designs. The Jewish Museum presents the first comprehensive exhibition in the United States dedicated to Roberto Burle Marx, one of the most prominent landscape architects of the 20th century. The son of a German Jewish father and a Brazilian Catholic mother, Burle Marx embraced modernism in the early 1930s and revolutionized landscape design by using abstraction as his guiding principle and incorporating native plants. Throughout his 60-year career, the artist designed over 2,000 gardens worldwide and discovered close to 50 plant species.

Demonstrating the breadth of his work, Roberto Burle Marx: Brazilian Modernist, on view May 6 through September 18, 2016, features over 100 works, including garden plans, paintings, sculpture, theater designs, jewelry, and a magnificent tapestry—most of which have never been seen in the United States. Also represented in the exhibition are a group of international contemporary artists who have been inspired by Burle Marx: Juan Araujo, Paloma Bosquê, Dominique Gonzalez-Foerster, Luisa Lambri, Arto Lindsay, Nick Mauss, and Beatriz Milhazes (lobby installation). Read more here.