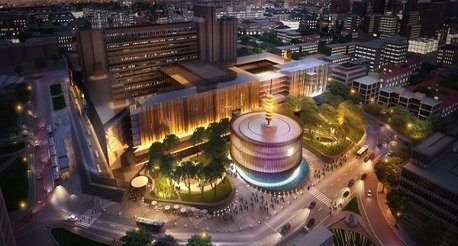 The construction of the City of Johannesburg’s new R280-million council chamber is almost complete and the glittering, state-of-the-art building will be ready to host its first council meeting in May this year.

Standing 38m tall adjacent the Metro Centre – the City’s headquarters in Braamfontein – the two-level circular calabash-shaped glass building is currently undergoing the finishing touches but already one can feel its warm and welcoming ambience.

“Everything should be finished by April 30,” says Fazel Raymond, the City’s Assistant Manager of Maintenance and Repairs as he takes me on a tour of this unique, modern-day African meeting place. “We have to make sure that everything is working by then.”

Recently handed over to the Speaker of Council, Cllr Vasco da Gama, by the Johannesburg Property Company (JPC), the City’s property arm, the building gleans in the bright autumn sunshine. An 11m-long gold light tower atop the chamber reflects the history of the City of Gold.

Tons of glass, recycled steel and concrete have been used to construct this five-star rated green building, smack in the middle of the Johannesburg CBD. Facing the busy Rissik Street is the City’s coat of arms, which looks majestic.

The tour, which starts at the existing council chamber, takes us through the security turnstiles of the new building. We immediately come across groups of men and women from Falcon Shopfitters and information technology company Dimension Data hard at work putting the final touches ahead of the scheduled May opening of the chamber.

About 280 councillors’ seats, made of brown leather, wood and steel, are ready for their new occupants. In front of every seat, complete with the names of the councillors, is an audio system activated by using biometrics or thumbprints, the most up-to-date audio equipment Dimension Data has fitted in this paperless chamber.

“They (Dimension Data) did a similar project in Parliament three years ago,” explains Raymond. “But this is more advanced.”

The system also gives the councillors the ability to vote electronically. The telephonic messaging system, linked to senior officials and executive members, enables information to be exchanged without disrupting proceedings.

Above the councillors’ sitting area is a 150-seater public and press gallery. From this vantage point, journalists and members of the public can follow proceedings from two screens located just behind where the Speaker and his support staff sit.

Behind the wall are four air-conditioned translation rooms and a separate room for a sign language interpreter.

Alongside the rooms is a security operations nerve centre equipped with hi-tech cameras that cover all the angles inside and outside the chamber.

One of the most amazing features of the chamber is its acoustics. Every minute detail has been attended to – from the fawn carpet, steel ramp, ceiling boards, the blue overhead electronic screen to the down-lights and tinted glass, which allows a 360-degree view of the Johannesburg skyline.

Two flights of stairs provide emergency escape routes through the belly of the chamber. There are several other emergency exits around the chamber that lead onto the piazza. Level with the piazza lies a body of water.

“No, we will not have koi fish,” Raymond quips. “It would be too expensive to maintain.”

There are two rows of 18 toilet facilities – one row on the lower and the other on upper levels for councillors and the public respectively. Each toilet cubicle has a cistern and marble-top washing basins. Outside, 135 totems line the façade, adding a unique touch to the building. The collection of the totems was drawn from a public competition.

Landscaping is in full force to ensure that the grounds are in pristine condition on opening day.

The building was given a five-star rating by Green Star SA Public and Education Buildings Design by the Green Building Council of South Africa even before it was completed. Also of significance is the fact that the new council chamber will use less water and electricity in line with the Joburg 2030 Strategy.

The chamber also represents the City’s agenda of economic transformation, empowerment and inclusion, putting Batho Pele and access for the people. The old chamber, built in 1973 will, however, not be left in ruins. It will be upgraded and made the main caucus room.