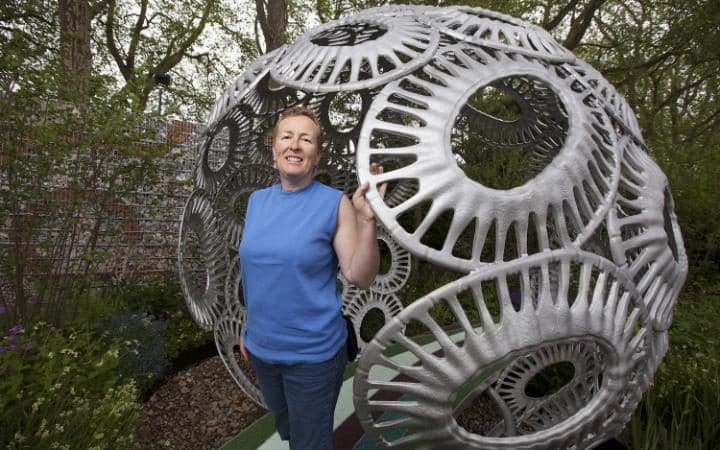 On May 23, you’ll be able to walk through the gates of the RHS Chelsea Flower Show and be transported from Spain and Malta to China, Japan, ­Canada, Mexico and Bermuda. Many of this year’s gardens evoke exotic climes, while others look to the Yorkshire coast, the Norfolk marshes and Berkshire’s heathland. The themes of education, art and sustainability have also inspired the designers.

We can probably expect planting styles to be diverse too, and nurseries that grow the bulk of the show garden plants say many designers are going for bright and cheery summer colours, ­including deep purple and burnt ­orange. These bold, unsubtle hues may startle the hortirati – will they work, or look like a bag of jelly beans?

But at this stage, a bigger talking point is sponsorship – or lack of. There are only eight show gardens on Main Avenue this year, even fewer than the previous low of 13 in 2009 (known as the “Credit Crunch Chelsea”) and a big drop from 17 last year. High-profile names such as Laurent Perrier have not returned and others, such as L’Occitane and the Telegraph, are sitting out this year.

The downturn could be a case of Brexit wobbles or just part of the natural cycle of Chelsea. But it was still a surprise when show sponsor M&G Investments announced it would not be renewing its contract with the RHS when it ends this year.

The RHS would not comment on whether a new sponsor is in place for 2018 and beyond, but confirmed that an announcement will soon be made on the renewal of the BBC contract to broadcast the show.

James and Helen Basson, who have won gold two years running for evocations of the Provençal landscape, are hotly tipped to lead in this category.

This year, for the M&G Garden, they have hopped over to Malta to represent a quarry with a range of ecologies and planting types, with a garden that may prove challenging to some visitors and perhaps even the judges. The couple see this as a chance to discuss how to rejuvenate abandoned industrial places.

“By taking an extreme, mineral, ‘hard’ man-made space and working with ­nature to make it beautiful, we hope to persuade people that all those ­urban spaces we don’t know what to do with can be turned into something ­extraordinary,” says Helen.

When you listen to a piece of music, you can ­envisage colours, patterns and rhythms, and we’re going to use this to direct the planting of the gardenChris Beardshaw

Also inspired by a foreign landscape is Charlotte Harris, a veteran of Chelsea behind the scenes, but a first-time ­designer. She is creating “a slice” of the boreal forests and waterways of ­Canada for the Royal Bank of Canada Garden, featuring pine trees and granite and copper elements in the hard landscaping. “The gardens I like best, and those I like to make, speak of the place that they are from,” she says.

Chris Beardshaw is back for his third garden with sponsor Morgan Stanley, this year focusing on education. His garden features varied planting from shady woodland to sunny terrace, with an oak pavilion at the centre where the National Youth Orchestra will perform.

Music has been composed for them to perform at the show, based on the design of the garden. “When you listen to a piece of music, you can ­envisage colours, patterns and rhythms, and we’re going to use this to direct the planting of the garden,” says Beardshaw.

Also concerned with education are designers ­Andrew Wilson and Gavin McWilliam, who are back with their second show garden, Breaking Ground, for Wellington College. Blocks of planting evoke the endangered heathland near the school, but the most eye-catching aspect of their design will be the see-through sculptural walls made of steel.

“The college is creating a fund to allow children to access education regardless of their ability to pay fees,” says Wilson. “The comment ‘breaking down the walls’ came into our discussions, so we set out to create transparent structures that appear to deconstruct or break down.”

Other Main Avenue Show Gardens include Tracy Foster’s Welcome to Yorkshire Garden, with ruins, a beach and “the sea”; Lee Bestall’s 500 years of ­Covent Garden, which depicts the area from abbey orchard to flower market; and the Chengdu Silk Road Garden, which will feature an architectural “bridge”, and references to Chinese embroidery.

Also bound for Main Avenue is the Linklaters Garden for Maggie’s, the cancer charity’s first show garden, ­designed by Darren Hawkes, who won gold in 2015.

From the outside, his ­design will seem oddly impenetrable, with tall hedging blocking any view except that from a small gateway to the front. But in a stroke of novelty, visitors will be able to walk a path alongside the garden, with views into the space through slots cut in the hedging.

These small, traditional-style gardens, nine this year, have plenty going on, from television presenter David Domoney’s centenary celebration of the Commonwealth War Graves ­Commission, to Graham Bodle’s predominantly green planting around an old wharf, and Gary Breeze’s marshland with replica of the 800-year-old boat. There are two Japanese gardens: Hagakure – ­Hidden Leaves, a peaceful family ­refuge; and Gosho No Niwa by Chelsea regular Kazuyuki Ishihara.

Debut designer Fiona Cadwallader doesn’t have a sponsor for her Poetry Lover’s Garden, which is inspired by Coleridge’s poem “This Lime-Tree Bower My Prison”. It will include ­bespoke features designed by her, including a metal garden gate, water ­feature and chaise longue. “Although it would have been great to have the ­financial security, being self-funded has given me complete ­artistic freedom,” she says.

Good show gardens should challenge our taste, sensibilities, morals and tempers, and can be outrageous, brash, cheap, loud, angry, shocking, and a real challenge to its audienceDeborah Nagan

Sarah Eberle is a true Chelsea veteran, last year becoming the only designer ever to have won a gold in each of the design categories and a floral ­exhibit in the Pavilion. This year, for her second Artisan garden for Viking Cruises, she will be looking to Barcelona and the architect Gaudí. Eberle is designing the Hillier Nurseries exhibit in the Pavilion for the second year, too.

The Fresh category, five strong, has a more urban slant. The Breast Cancer Now Garden was funded by donors and charitable trusts that support the charity.

Designer Ruth Willmott and her team are giving their time pro bono. The garden’s standout features are three large stainless steel rings, which represent the microscopes used by cancer researchers.

Other conceptual Fresh Gardens ­include Bermuda Triangle by Jack Dunckley; and Mind Trap by Ian Price, which symbolises the ­designer’s experience of depression.

Beneath a Mexican Sky by first-time designer Manoj Malde takes its inspiration from the work of architect Luis Barragan, and will feature warm colours and drought-tolerant plants, including the tender treelike shrub Kalanchoe beharensis.

Meanwhile, the practical-minded City Living Garden by Kate Gould comprises a series of gardens on three ­levels to show apartment dwellers ways to green up their outdoor spaces.

Anne Wareham, author of The Bad Tempered Gardener, would like to see a weed garden, or a minimum- maintenance garden. “That is what 90 per cent of the population wants, isn’t it? So it’s worth showing how to do it stylishly,” she says.

Designer Jo Thompson, who won gold last year: “I’ve heard from visitors that they want to see real gardens with elements that they can take home and reproduce in their own gardens.”

Guerrilla gardener Richard Reynolds would prefer something like his Recycled Garden at the Hampton Court Flower Show, where he used plants left over from the building of other show gardens.

Toby Buckland, goes one step farther. “I’d like to see a ‘Garden of Serendipity’ where all the spare stuff from the garden builds, which usually ends up in the skip, is turned into a whole new garden. If it was built during the show, visitors could get an insight into the skills involved.”

Showing people the effort that goes into building gardens is what veteran Chelsea landscaper David Dodd would like to see. “The empty space would be ideal for students to demonstrate their skills to the public. This could be done as a ‘living workshop’, live demonstrations with Q&As on dry stone walling, tree planting, paving, planting design, etc.”

Rosy Hardy, who has exhibited in the Pavilion as a nursery and on Main Avenue with a garden, would introduce a more educational aspect to the show. “There could be a large clear box with a screen above it broadcasting what was happening within – practical workshops in everything from horticultural basics to advanced design.”

None of these ideas is radical enough for architect Deborah Nagan, who has created conceptual gardens and installations at top international shows such as Chaumont. “Good show gardens should challenge our taste, sensibilities, morals and tempers, and can be outrageous, brash, cheap, loud, angry, shocking, and a real challenge to its audience. How about a garden destined for Aleppo, or to revitalise the site of an environmental disaster?”

Artist David Harber has taken a stand on Main Avenue for almost 20 years, and says that in the hectic atmosphere of the show, one thing that is missing is a place to hit the pause button. “I would love to see a garden or space that is open access, that you can walk through, which is simple and Zen. It would be a mini-sanctuary where you could find a moment of calm, as well as a meeting place.” It’s the norm at other shows, so perhaps it’s a challenge a brave designer would take on…

For more on the origins of this article please click here
www.Telegraph.co.uk