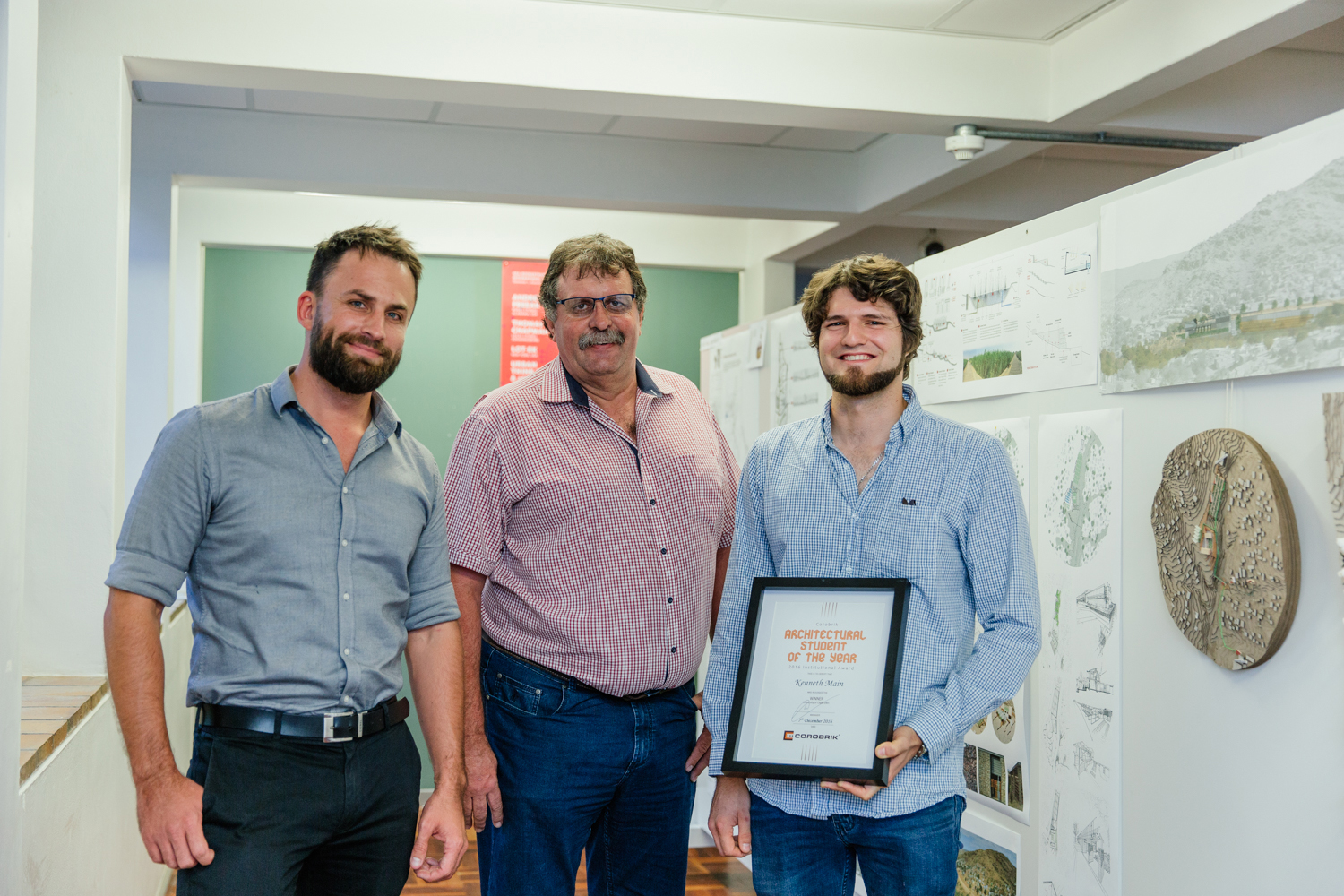 Great architectural design is sustainable design. It is design which ensures that the built environment complies with the principles of social, economic and ecological sustainability. It requires skill and sensitivity on the part of the architect. This was evident in full measure during the regional rounds of the 30th Corobrik Architectural Student of the Year Awards.

The competition has been held annually for the past 29 years to reward and advance excellence in the architectural profession countrywide. It involves regional competitions at eight major South African universities in the build-up to a national award ceremony in Johannesburg on the 10th May 2017 at which the overall winner is named and presented with a prize of R50 000.

Christie van Niekerk, Corobrik Western Cape General Manager presented prizes to architectural students of University of Cape Town on the 15th March 2017. The regional winner of R8 500 was Kenneth Main, with Michèle de Villiers receiving the R6 500 second prize and Kayla Brown taking home the third prize of R4 500. The prize of R4 500 for the best use of clay was won by Christian Scriba.

Kenneth Main’s thesis is entitled Urban Acupuncture: Architecture as a catalyst for environmental and water conservation in the context of the Kilimanjaro Informal Settlement.

In his thesis, he attempts to establish an approach to dealing with the issue of waste contamination and water conservation in the natural and urban landscapes of the riverbed, its edges and man-made peripheries. The research locates itself at the northern boundary of the city of Windhoek along a stretch of polluted riverbed in the Kilimanjaro Informal Settlement (KIS).  In the creation of an architectural approach ‘urban acupuncture’ is explored to create architecture that has the potential to influence areas beyond its physical boundaries.  In addition, it can re-establish and re-imagine the value of the river for its unseen influence in shaping Windhoek as rapid urbanisation is taking place. Aspects of environmental degradation, water conservation and lack of basic infrastructure form a basis of inquiry to which an urban framework is proposed. Most simply, this framework acts to establish an alternative and more efficient system which collects, stores, filters and reuses wastewater for both drinking and irrigation purposes through a series of four contextually assigned architectural devices. Utilising the ‘bi-products’ of this urban frame work (Reedbed filtered water & potable/drinking water), the KIS Agricultural Learning Centre is proposed.  The Centre provides a point of exchange for both in-situ filtered drinking water and fresh produce that is grown at the centre establishing a link between this infrastructural insertion and its public and social constructs.

Runner up Michèle Michele de Villiers proposes, A landscape in motion: Extending urban landscape typologies in Imizamo Yethu.   She says, “post-apartheid South African cities have inherited landscapes that contribute towards the disorientation of the public and the division of communities- historical traces that fly in the face of what one imagines the spatial planning of a democratic city to be. The chosen site, used to historically segregate a community of Imizamo Yethu, Cape Town, from its affluent neighbours in Hout Bay.   The project proposes public buildings connected by routes and platforms of play, providing surveillance between safe outdoor spaces and programs, orientating users in a large, outdoor park. These safe community spaces are surrounded by natural fynbos, rehabilitating mountain vegetation to assist in absorbing the storm-water of the Hout Bay valley and continued erosion of the Disa River below.”

In third place, Kayla Brown’s thesis is titled GROUNDING DENSITY: Mobilising the economic and spatial potential of affordable housing along the Delft South main road on the outskirts of Cape Town.

Christian Scriba, award for the best use of clay brick is for his thesis entitled Neurosis●Continuum: Architecture as Urban Therapy.

Scriba’s project is based on findings which may solve or address the spatial difficulties of the current urban environment of Cape Town, specifically Woodstock. He undertook a psychological reading of the site, to understand where its faults and difficulties lie as well as to create a treatment for these problems.

Given this reading, the project proposes a centre for victim offender reconciliation, and community rehabilitation, to address marginalized individuals needs to re-join normal society.

“Clay masonry and more specifically – red brick, was used as a tool to bring about warmth and personal, safe and intimate personality to specific areas of a large imposing and introverted building,” says Scriba.   “The brick aids in psychological rehabilitation, by overturning the buildings concrete character.”

He used its modular size, to create architectural elements wherein walls slant/lean inwards ever so slightly, making the building appear as though it where on the verge of collapse – yet never actually broken – a metaphor to connect to the ever so prevalent psychological problems of society, which should never get you down.

“We expect the architectural students to be conscious of the big picture and the global environment in which they operate,” said van Niekerk. “This includes the concept of sustainable building and an awareness that life cycle impacts are critical to the design of environmentally responsible buildings. It was clear that this was the case with the winning students this year.”

The correct choice of building materials was a factor in ensuring environmentally friendly construction practices, van Niekerk said, and it was hard to ignore the sustainable properties of clay masonry in this regard.

“Energy efficiency is an increasingly important consideration in reducing environmental impact and it here that face brick comes into its own because of its thermal efficiency, helping to keep the interior of buildings cool in the hotter months and warm in winter, a benefit which is of particular importance in South Africa with its extremes in temperature. Superior thermal efficiency also means lower energy costs throughout the life cycle of a building and peace of mind knowing that the first cost is essentially the last cost.”

“The architectural and building sector are increasingly receptive to the idea that, when considering the life cycle costs of a project, eco-friendly buildings cost less to operate and have excellent energy performance. As a result, we are seeing architects creating designs for environmentally sound buildings, a trend that was manifested in the projects submitted by this year’s students and one which bodes well for the furtherance of world class architectural design in this country.”

Caption:  Pictured from left, Werner Oelofse and Christie van Niekerk of Corobrik with the winner of the University of Cape Town regional finals of the Corobrik Architectural Student of the year Kenneth Maine.  Kenneth’s winning thesis is entitled Urban Acupuncture: Architecture as a catalyst for environmental and water conservation in the context of the Kilimanjaro Informal Settlement in the Western Cape.

Caption 2:  Kenneth Main will represent the University of Cape Town at the Corobrik Architectural student of the Year Awards.  He is pictured in front of his winning thesis model.  The thesis is entitled Urban Acupuncture: Architecture as a catalyst for environmental and water conservation in the context of the Kilimanjaro Informal Settlement in the Western Cape.