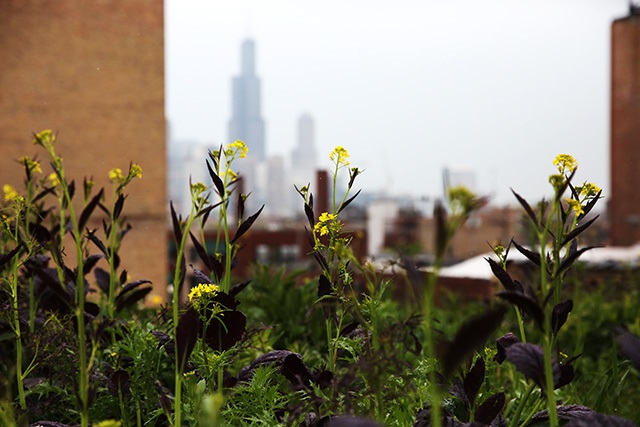 Warehouses, factories and distribution hubs don’t conjure up images of green design. At least not yet.

Office buildings, retail and luxury apartment towers haven’t had a problem going green—city hall, the Rock n’ Roll McDonald’s and the Aqua Tower are all examples of this. But industrial buildings are different. Dirt can get heavy, and the roof on top of a 500,000-square-foot facility might not be built to support the weight of a garden, which can reach up to 50 pounds a square foot. Other hurdles include affordability, extra planning effort and older structures being unable to accommodate extra weight.

As technology advances, some of those problems get solved. OMNI Ecosystems, a company that creates living infrastructure, has developed an extremely light and biodiverse growing medium, called Infinity Media. If you’re wondering how you make dense dirt lighter, OMNI Founder and chief executive officer Molly Meyer simplifies the explanation by likening the process to a popcorn maker. All the same material is there; it’s just popped with air so that per-square-foot it weighs as little as 15 pounds.

The lighter soil can grow everything from lawns, flower fields, veggies and even small apple trees. The plant index from The Roof Crop, which farms and maintains roofs from OMNI Ecosystems, lists five varieties of broccoli, two kinds of kale, six types of tomatoes and more obscure greens like Pak Choi and Mizuna. OMNI Ecosystems just harvested its own rooftop this spring that grows specialty greens for James Beard-nominated Momotaro on Randolph Street.

The company also learned wheat does well on rooftops, too. When OMNI was hired to install a wildflower meadow on top of Studio Gang’s Chicago office, it was too late in the season for the flowers. So they planted a winter wheat as a place holder and were surprised to come back in the spring to find an abundance of the crop. The Roof Crop had students in its after-school program harvest the wheat, Baker Miller then made flour out of the grain and the students made cookies.

The changes in green design could make it a more attractive and feasible option for industrial buildings, too. That’s what the US Green Building Council is hoping will happen. The industrial sector faces a unique set of challenges and can be more complicated than projects within other sectors. That’s why USGBC, which oversees the LEED certification process, created an initiative to help industrial facilities obtain LEED certification.

One of the green industrial projects that the USGBC highlights in its industrial report last year was Method’s South Side Soapbox. The 22-acre site has a 230-foot wind turbine generating half the building’s electrical consumption, a rooftop greenhouse farmed by Gotham Greens and solar-tracking trees in the parking lot.

Roger Schickedantz, director at William McDonough + Partners, worked on the team that designed Method’s facility. “Method is fairly unique,” he said. “We’ve had a couple clients like this but it’s not very common, yet.”

Gotham Greens, a company similar to The Roof Crop, farms Method’s 75,000-square-foot green house and grows up to 10 million heads of leafy greens and herbs year-round for grocery stores and restaurants. Businesses like this give buildings a way to monetize an otherwise unused space.

If one city can push for green industrial buildings, it’s Chicago.

“Green building is really dependent on policy,” said Meyer. It began with Mayor Daley and his initiative for green roofs, she said. Mayor Emanuel has continued the effort by recently committing to power all city-owned buildings exclusively with renewable energy by 2025.

Setting requirements and providing incentives have been a driving force in making Chicago a global leader in the green roof movement and number of LEED certified projects, according to the mayor’s office. The most recent statistic from 2013 says that more than 500 buildings have green roofs, totaling about 5.5-million-square-feet.

“I think the greatest thing would be if industrial buildings started using green roofs,” said Meyer. “You look at some of these massive spaces with totally unused space. There’s storm water flowing off and the urban heat island effect intensifying, natural habitats have been replaced, energy not being optimized. Green roofs help with that and on top of everything you’ve got just the feel good aspect of people wanting to go to work in a place that is uplifting.”

Rooftop farming might take some time to catch on in the industrial sector but changes in technology might make the shift easier. Looking to the future, Schickedantz goal is for factory design to use a little to leave a big impact. “Finding new ways to use what we already have, that’s where we are headed,” he said.

This article was taken from Rejournal.com