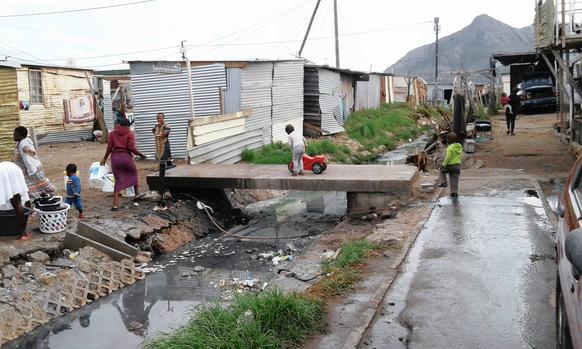 Cape Town – During a high level visit to the volatile area of Masiphumelele, near Fish Hoek in Cape Town, Mayor Patricia de Lille outlined the city’s plans for the sprawling informal settlement.
The area has been the scene of violent protests due to a lack of service delivery and the provision of housing and land.
De Lille, Public Protector Busisiwe Mkhwebane and SA Human Rights Commissioner Chris Nissen visited the area on Thursday morning.
“I also informed the Public Protector about some of the projects that are under way and projects which will start in the near future,” De Lille told the Cape Argus.
“The City’s Transport and Urban Development Authority (TDA) is spearheading three major projects intended to improve the quality of life of those residents living in Masiphumelele.

“The construction of 227 state subsidised houses is progressing well, as are the plans for a new minibus-taxi facility and the proposed extension of Houmoed Avenue.

“Access to decent housing opportunities and public transport improves people’s lives. Everything the City does is aimed at improving the lives of those in need. In Masiphumelele we are making every effort to better residents’ living conditions and access to job opportunities,” she said.

Phase 4 of the Masiphumelele housing project would include the construction of 227 Breaking New Ground (BNG) State subsidised houses worth R55 million.
“The construction of the platforms that are needed for the houses, as well as the civil engineering services for the provision of water, electricity, sewage and roads, should be completed within the next few weeks,” De Lille said.

The City is also building a new, green transport hub in the area. The tender is expected to be issued within the next few weeks. The facility will be built on a section of the land situated on the corner of Kommetjie and Pokela Roads.

Canals in Masiphumelele with stagnant water. File Picture
“We want to transform this space into a new public transport facility where residents will have a safe and dignified area for waiting and connecting with their fellow commuters. The facility will be equipped with a rooftop solar photovoltaic (PV) panel system for electricity generation and rainwater tanks. An admin building will be constructed where operators and management can conduct meetings and universally accessible walking lanes will provide safe and easy access to the facility,” De Lille said.

Around 3 300 commuters use the current facility – a vacant, unserviced piece of land – every day.

The extension of Houmoed Avenue is also expected to prevent flooding in parts of Masiphumelele.

Masiphumelele has been the scene of violent service delivery protests for a number of years. Picture: Michael Walker

The City was also trying to make more land available for “high-density housing” with a mix of subsidised housing and council rental units.

“I have reiterated to the Public Protector and Commissioner Nissen that the City is doing all we can in Masiphumelele but the key is to address both the overcrowding and the issue of people living in the wetland by improving the living conditions of the people of Masiphumelele, through de-densifying the informal areas, provision of services and at the same time providing formal housing opportunities with increasing those densities,” she said.

Information Taken and provided by the Cape Argus.