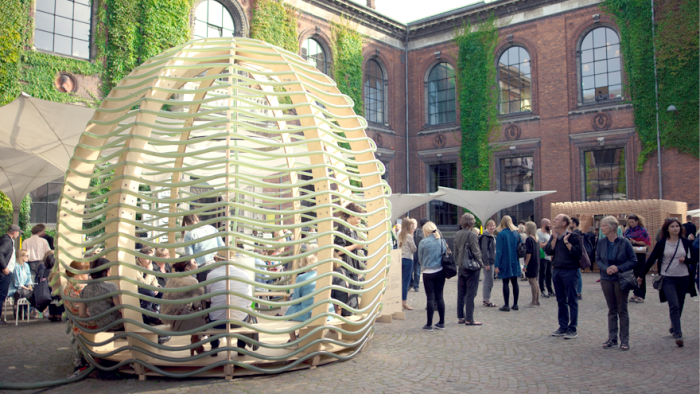 Space10 is a future-living laboratory that explores cutting-edge design problems and their futuristic solutions. It is an external arm of multinational furniture design firm IKEA based in Copenhagen. Their latest project, the Algae Dome, was recently unveiled at the 2017 CHART Art Fair, a festival that celebrates leading Nordic art and design projects each year.
It is a 4 metre high rounded structure made of 320 metres of clear tubes. These coiled tubes contain a unique substance that researchers are calling the superfood of tomorrow – microalgae. The entire design acts as a bioreactor, proliferating the healthy sludge with sunlight. During the 3 days of the CHART festival, the Algae Dome produced some 450 litres of useful microalgae, which can be distilled into a shake, paste or even nutrient-rich spirulina chips (which were made by Space10’s resident chef Simon Perez and handed out for passersby to enjoy).

Microalgae holds great potential as a solution to some of the world’s environmental problems. It is a supercharged source of nutrients that is totally free of animal matter. It can become the replacement for soy protein used in animal feed, help the advancement of biofuels and reduce carbon dioxide in the atmosphere.
“Our mission is to explore ways to make the world better, more meaningful and more sustainable,” say the Space10 designers on their impetus for the project, “Right now we’re exploring the future of food and ways to improve the food system. We believe that algae could provide the answer to some of the world’s biggest problems — from malnutrition to climate change.”

Though the Algae Dome remains a speculative prototype designed for a temporary exhibit, it does open up compelling questions regarding the relationship of food and architecture design moving forward. Could the sun-drenched buildings of tomorrow feature healthy microalgae pumping through its emerald veins for humans to eat?
“Imagine an apartment building equipped with a similar photobioreactors that not only boosted local oxygen levels but also produced spirulina that the building’s residents could use to supplement their diets. Or picture bus stops kitted out with algae that stripped greenhouse gases from the atmosphere and produced spirulina that could be used to bake fortifying bread for malnourished families.”