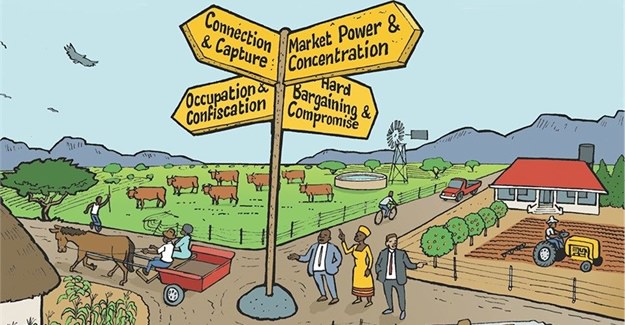 The economy, to put it mildly, is in the doldrums. This grim picture was laid bare by the depressing figures that Finance Minister, Malusi Gigaba, shared with the nation during the medium-term budget policy statement a few days ago. It is not the bleak economic picture that the finance minister painted that depressed South Africans, but rather the increasingly limited options that the country is facing as it continues to helplessly slide down the cliff towards the dark abyss below.

Due to lower than expected economic growth this year, South Africa is facing a tax hole of a staggering R50bn. This will in all likelihood have a negative impact on government ability to meet some of the development needs in the country.

The picture is not only bleak, but it is cause for concern. While this may not be Armageddon, the figures do not bode well for the acceleration of the land reform programme.

While land reform, smallholder farmer and agriculture development have been cited as one of the expenditure priority areas for the medium term expenditure period, the meagre contents of the kitty do not inspire much confidence.

It is in the light of these severe budgetary constraints that the Vumelana Advisory Fund is calling for the exploration of alternative solutions to speed up and enhance efforts aimed at enabling the successful implementation of the land reform programme. Everyone is in agreement that accelerating agrarian reform and securing a permanent and lasting solution to the land question is a capital-intensive exercise that requires buy-in from all the stakeholders involved.

The speedy resolution and need for successful land reform should not only be seen as critical from a constitutional and moral perspective but must also be seen as a commercial imperative. The challenges that face the country are complex and deep-seated and require equally audacious and comprehensive solutions.

The importance of public-private partnerships

Minister Gigaba alluded to the importance of public-private partnerships when he delivered the medium-term budget policy statement: “We need business, labour and civil society to come together to forge common solutions to growing the economy inclusively, and on a more radical and sustainable basis. Together, we must forge not only common dreams and commitments, we must become the architects of the dreams and ideals we share.”

We believe that given the current challenges and the huge demands on the fiscus, mobilising private investments into land reform projects is the immediate way in which jobs, skills and income can be created particularly in the rural areas. This will require partnerships with investors and operators with access to financial and other markets.

The future of land reform

The lingering land question is a tinderbox that is waiting to ignite and explode. Business does not operate in isolation of the socio-economic challenges facing the country. The future and sustainability of the private sector are dependent on the manner in which the land question will be addressed, and the issue of land must be navigated with the utmost caution, bearing in mind that the future of the country is, in fact, dependent on how land reform is implemented today.

Active involvement of the private sector, communities and government is key in dealing with the current realities. It is also important that we have constructive debates in order to shape the future of land reform in South Africa for the benefit of all and future generations. Vumelana’s contribution to these debates has been through convening and supporting a scenario building process on the future of land reform in South Africa. The team that developed these scenarios comprised more than 40 diverse participants including public officials, traditional leaders, academics community-based organisations, business leaders and a range of specialists working in land reform.

This team finally came up with four possible scenarios that could play themselves out in the future. The group in coming up with these scenarios was hoping that they will encourage dialogue that would help South Africa’s land reform to move forward. The four scenarios are:

Tackling the challenges that face the country

Every stakeholder is in agreement that we need an economy that works so that we can tackle the trio challenges facing the country: spiraling unemployment, abject poverty and widening inequalities.

As the finance minister succinctly put it: “It is economic growth that creates employment opportunities, creates opportunities for large and small businesses to thrive, allows our population to accumulate wealth, supports increases in government revenues, and facilitates the expansion of social programmes.”

From 15 November to 15 December, the Vumelana Advisory Fund will embark on a series of roadshows to begin progressive discussions with communities and business across the country on ways in which communities can work together with private investors in ensuring the success of land reform.

This was written by Peter Setou for Bizcommunity