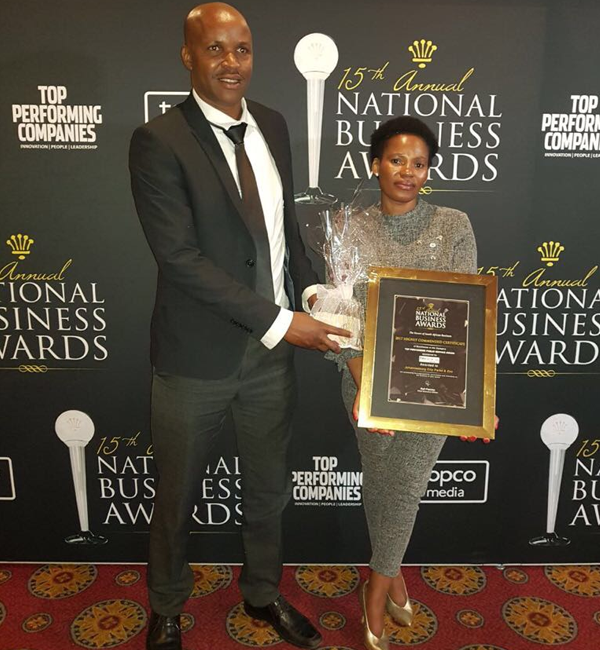 Outpaced only by trophy winner Mintek, Johannesburg City Parks and Zoo was lauded with the Highly Commended Award in the Top Performing Public Service category, at the 15th annual National Business Awards on 16 September.

JCPZ’s’s achievement at the renowned “Oscars of South African business” resulted from the unanimous verdict of the awards’ Judges, a collective of industry heavyweights. There to hear the accolade announced were a host of business & government leaders, VIPs and media representatives. Also watching, via live social media updates, were thousands of South Africans whose engagement kept the awards trending for several hours.

Recent achievements include the City of Joburg being named the Greenest City in the 2017 national awards by the Department of Environmental Affairs and achieving its first clean audit for the 2016/17 Financial Year.

Commenting on the accolade, acting Managing Director Bukelwa Njingolo said, “We are extremely proud to be acknowledged with the Highly Commended award, especially given the calibre of the organisations we were up against in the Public Sector category. I would like to thank the judges for recognising our level of commitment to the people and natural resources of Africa’s greatest city. The certificate belongs to all our citizens in Joburg, and provides a motivational boost to keep putting our all into the green heart of Joburg.”
Top Media CEO Ralf Fletcher, who gave the evening’s Welcome Address, commended the achievement of the night’s finalists and winners, saying that “In my 20 years of immersion in the science of business performance recognition, I have seldom seen such a powerhouse collective of innovators, job creators and drivers of the economy all together on the same roster. Tonight has only deepened my belief in the global competitiveness and drive in evidence across our economy’s primary, secondary and tertiary sectors. I can’t wait to see what this year’s National Business Awards champions will do next.”