Award winning young architects pave the way to the future 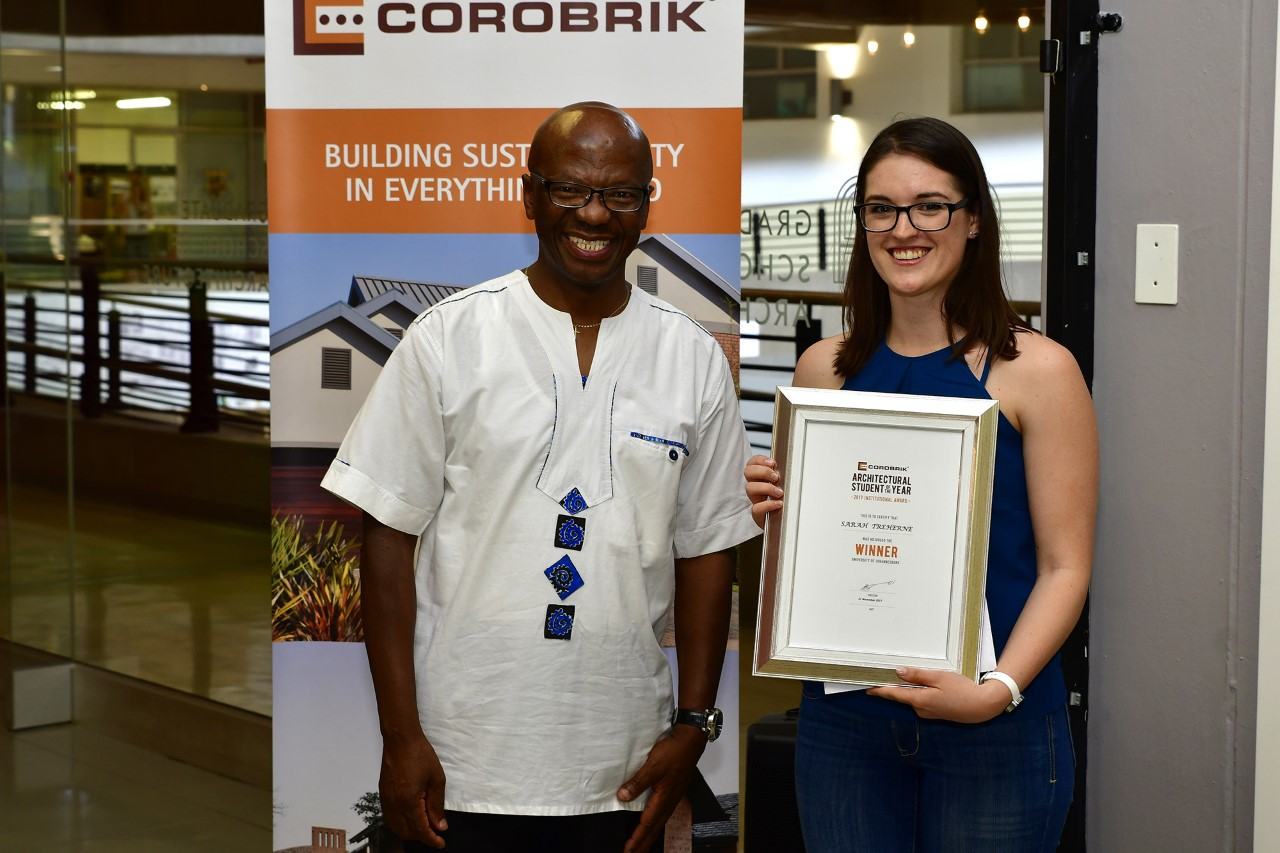 The architects of the future are the ones that will completely transform the way that we inhabit this earth and usher in the lived reality that will be the fourth industrial revolution.

Speaking at the University of Johannesburg regional awards ceremony for the 31st Corobrik Architectural Student of the Year Award Musa Shangase, Corobrik Commercial Director told the winners that they would lead the way towards more sustainable living in an era of supper connectivity through mobile devices, the internet of things, cloud computing, self-drive vehicles, 3-D printing, nanotechnology, biotechnology, quantum computing and more.
Quoting architect Frank Lloyd Wright who said that every great architect must be a great original interpreter of his time, his day and his age, he noted: “Technology will not only dictate how we design the built environment of the future but how we build it and live in it. However, never forget that the technologies of the past – including what may at first sight seem like a simple clay brick – will continue to impact on our lived reality. They will remain the building blocks of the future. History, especially in developing economies and societies like South Africa, will determine our ability to embrace what is new in order to address the short comings of the past.”

At the ceremony, the winner Sarah Treherne received first prize and an award of R8 500 while Mandy Shindler and Sabine Waskow shared the runner up place each received R5 500.00    A R4 500 prize for the best use of clay masonry was also presented to Amanda Barnard

In this annual competition, the country’s best architectural students from eight major universities are identified based on their final theses and presented with awards throughout the year. The winners of each of the regional competitions then go on to compete for the national title and a prize of R50 000 at the Corobrik Architectural Student of the Year Awards which will be held in Johannesburg in April 2018.

She says, “At first reading, parables and fairy-tales may appear to have little do with architecture, but architecture is as much concerned with communication and storytelling as it is with shelter. The Subverse: Monuments to Hypertextuality is a series of six stage sets that harness the dual nature of fiction and theatre to confront the sensitive themes of privilege, patrimony, corruption, and collusion in post-apartheid South Africa. Set in the hyper-politicised suburb of Saxonwold, The Subverse generates a surreal landscape of socio-political enquiry.”

“Theatrical tactics – such as metaphor, diversion, juxtaposition, absurdity, and fairy-tale – are used to deliberately reconfigure the known narratives of historical events, landmarks, monuments, and accounts in order to reveal an alternative narrative, the sub – verse, of past and present South African politics. “

“‘Hypertext’ describes embedded links and the endless layers of information that form a vast web of cross-referencing between sites – in this case, between the six stage sets. Each layer of meaning conceals another, and with each tactical transformation, the resultant architecture becomes the stage on which a new story is enacted.”

In joint second place is Mandy Shindler with her thesis entitled ‘A Women’s Vernacular for the Twenty First Century.’ Sabine Waskow‘s thesis is entitled ‘Perpetual Monuments: An ‘Other’ Archive.

The best use of clay brick award presented Amanda Barnard for her project ‘The 168 Hour City. Modelling a vibrant urbanity through mixed-use housing typologies for Bertrams, Johannesburg.’

Titled the “168 Hour City”, the project explores housing as the city. In this city, there is no weekend. Someone is always awake, hustling, working, praying, studying… connecting.
Conceived as a high density, low-rise typology, this city’s qualities lie in the range of urban functions embedded in it and the defensible spaces and thresholds that allow these functions to take root. Circulation and services are arranged in such a way that spaces are flexible and can be appropriated for diverse uses and household constellations. Rather than a static one-size-fits-all approach the housing is conceived as adaptable, allowed to evolve over time into a range of unit sizes, living and working spaces. In its diversity, it offers a form of housing ladder that can accommodate individuals from various backgrounds and economic classes. As an individual’s economic position changes for better or worse they will still be able to remain in the 168 Hour City by moving up or down on the ladder.
Amanda Barnard said clay brick is used primarily in the project for its cost effectiveness in construction and will also provide brick building skills to local labourers that they can use for own economic empowerment. The shape and colour of the brick will help in easy identification between structural and non-structural brick work that will assist in future adaptability of the building. Clay brick also create maintenance free buildings. Bertrams has numerous multi-storey heritage brick buildings and this also had an influence on the use of clay brick, then the building relates to the existing urban fabric.

Musa Shangase said that Corobrik was extremely proud to recognise works of excellence that would be the mainstays of the architectural map of the future.

He added that, by supporting the architects of the future, Corobrik would be able to make the wisdom of its 115-year history as the leading producer of clay brick in South Africa available to future generations whilst, at the same time, ensuring that clay brick would remain relevant and continue to be the building material of choice in the South African cities of the future.

Pointing out that brick making has been traced back to 7 500 BC and even to the days of the Egyptians and the Roman Empire, Shangase said that the first industrial revolution had revolutionised brick making as the need for factories burgeoned and large cities grew. Over the years, more efficient and sophisticated methods of production had improved on this age-old methodology whilst preserving the most desirable attributes of a product that remained aesthetically pleasing, durable, non-toxic, reusable and energy efficient.