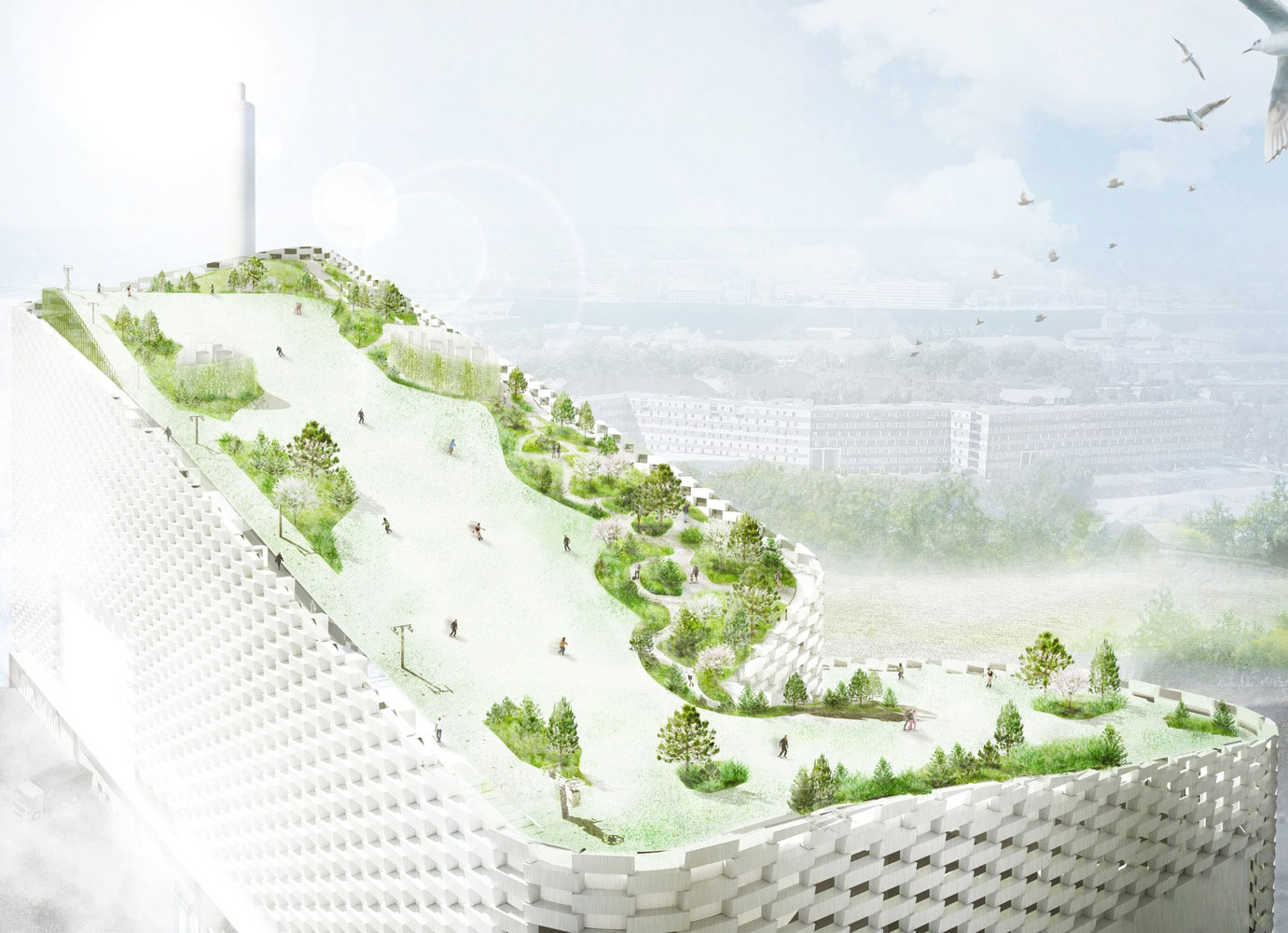 The Bjarke Ingles Group (BIG)-designed Amager Bakke Waste-to-Energy Plant in Copenhagen is finally set to wrap up later this year, and international firm SLA has revealed their final plan for the plant’s 170,000-square foot rooftop park. First revealed in 2011, the biomass-burning plant, with its ski slopes on the roof and a smokestack meant to belch ring-shaped clouds, instantly caught the internet’s attention.
Amager Bakke is seen as major step in Copenhagen’s transition to a carbon-free city, as the plant will burn wood pellets made from rotting waste wood instead of coal. Because Amager Bakke is off the coast of the city center, BIG chose to approach the project as both a publicly accessible common area and a tourist attraction.
Clad in a perforated aluminum façade that resembles oversized bricks, the power plant is 289-feet at its peak near the smokestack, but gently ramps downward to meet the ground and provides pathways for both walking and skiing. While the renderings released up until now have typically shown skiers tearing up snowy slopes, SLA has released renderings of how the roof will be planted in warmer weather.

A programmatic diagram of the sloped roof. (Courtesy SLA)
The extreme angle of the roof, combined with the building’s height, and temperatures reaching up to 140 degrees Fahrenheit due to boilers under the roof, meant that the plant selection had to be carefully curated.
Several distinct biomes are seeded throughout the roof, including a “mountain” and “meadow” area, trees to shield guests from the wind, and laid out hiking and jogging trails that run alongside the 1,640-foot long ski slope. A fitness area has also been placed alongside the viewing platform at the roof’s peak, which visitors can reach by either hiking, or by summiting the building via a climbing wall at ground level.
SLA hopes that other than being used as a year-round recreation space, Amager Bakke’s green roof will seed the rest of Copenhagen with city-friendly vegetation.

Seed dispersal from the roof will be actively encouraged as a way to green the surrounding city. (courtesy SLA)
According to Rasmus Astrup, a partner at SLA, “The rooftop’s nature is designed to attract and shelter a wide selection of birds, bees, butterflies and insects, which in itself will mean a dramatic increase in the biodiversity of the area. And utilizing natural pollination and seed dispersal will mean that we can spread the rooftop nature to also benefit the adjacent industry area, parking lots and infrastructure.”
Amager Bakke is also well known for its smokestack, which Bjarke Ingels originally envisioned as being able to blow a ring of steam for every ton of carbon dioxide that the power plant emits. Following a successful Kickstarter in 2015 to build a prototype of the system, the “steam ring generator” will be included in the final design.
Construction on the rooftop park is underway and will be completed in September of 2018.