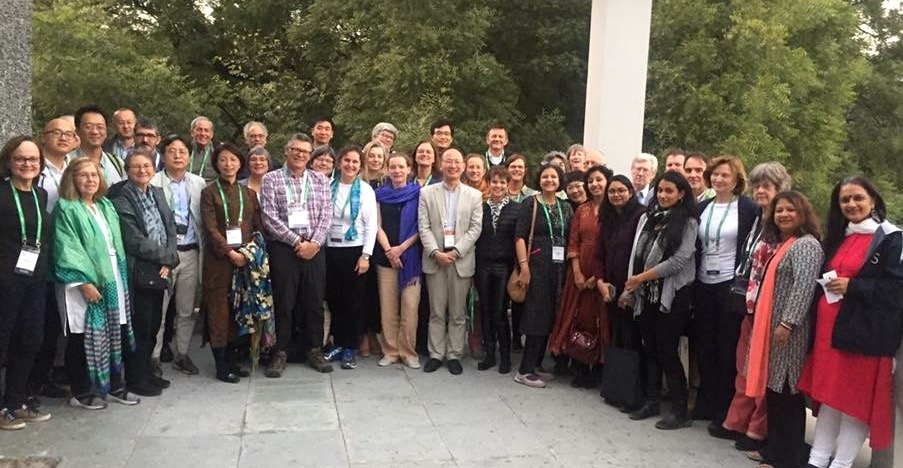 An expanding and flourishing Asia is struggling with urbanisation taking a serious toll on the natural and cultural heritage of most of its towns and cities. The loss of memory of the ecological basis of Asian religion and cultural practice makes this phenomenon especially alarming. The chasm/departure as visible in our cities therefore reiterates this recent marked shift from traditional ecological wisdom, a foundation of our ethos, towards a uniform, non-defining global aspiration of a city, its inhabitants and administrators as an attempt to emulate a model that carries the tag of ‘development’.In this context the 19th Triennial ICOMOS General Assembly and Scientific Symposium held in December 2017, on the subject of “Heritage and Democracy” was an attempt to reiterate the people centric approach to heritage, to acknowledge our past but also lead it into the future in a responsible way.The 5-day General Assembly was preceded by the annual meeting of the International Scientific Committee of Cultural Landscapes (ICOMOS-IFLA ISCCL). The two-day interaction of nearly 50 cultural landscape experts from 24 countries deliberated on the work being undertaken in their regions. This Committee was also responsible for the ratification of resolutions on “Conservation of the Lake Burley Griffin and Lakeshore Landscape, Australia”; Adoption of the ICOMOS-IFLA “Document on Historic Urban Public Parks”; “Incorporating the Interconnectedness of Nature and Culture into Heritage Conservation”; “Mobilizing ICOMOS and the Cultural Heritage Community To Help Meet the Challenge of Climate Change”.

The central idea of the Symposium was inspired from a recent, marked shift in heritage discourse globally towards a genuine people-centric engagement. The aim was to stimulate broad discussions that could identify sustainable means to work towards equity, ensuring intellectual and physical access to heritage monuments and sites. It acknowledged and built upon intangible associations with such places, empowering them to protect and interpret the future of our past in times of war and peace; with the increasing support of digital technology. Over 150 academicians, heritage professionals and students from a wide range of disciplines such as archaeology, history, architecture, conservation, urban planning, environmental sciences presented their research.

The Scientific Symposium was divided into four main subthemes. As sub theme 04, the Symposium provided a platform for dialogue on the ´Culture-Nature Journey´ (CNJ), which was an extension of the Nature-Culture Journey launched in 2016 at the IUCN World Congress in Hawaii. Delhi was the first Asian destination for the journey. In collaboration with IUCN (International Union for Conservation of Nature), ICCROM (International Centre for the Study of the Preservation and Restoration of Cultural Property) and ICOMOS, CNJ sessions were designed as workshops, knowledge cafes, case study kiosks and paper presentations. The foundation of these interactive assemblies was the relationship between people and the natural environment that gives shape to our physical environment and belief systems. The range of discussions built on the growing evidence that natural and cultural heritage are closely interconnected in most landscapes and seascapes, and that effective and lasting conservation of such places depends on better integration of philosophies and procedures regarding their management.