No Carbon Footprint! “The World’s Most Sustainable Shopping Centre”, with Rooftop Farm, to Open in Melbourne 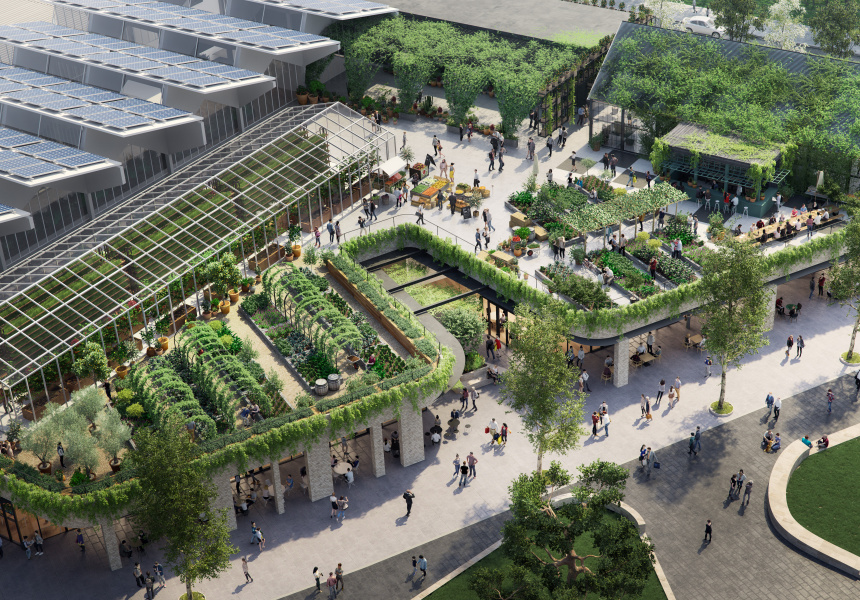 With the help of Joost Bakker, this trailblazing development aims to have no carbon footprint.

Frasers Property Australia has announced plans to regenerate Burwood Brickworks in Melbourne’s east into what it’s calling “the most sustainable shopping centre in the world”.
The developer has enlisted eco-pioneer, florist and designer Joost Bakker – best known for his sustainability-focused projects Silo, Brothl and Greenhouse – as a creative consultant to help turn the site’s 2000-square-metre rooftop into an urban farm and restaurant space.
Last week, Frasers opened expressions of interest for the rooftop’s new tenants. Bakker would love to see new, passionate businesses “come out of the woodwork” to take on the tenancy.
“You’re going to feel like you’re right in the middle of [a garden],” says Bakker, who became involved with the project when the developer held a design competition asking Melbourne-based architects to pitch their vision.
“They had an unusual approach, saying they want to meet the Living Building Challenge requirements,” Bakker says, referring to a rigorous green-building certification program. “I realised these guys are the real deal.”
Construction on Burwood Brickworks will begin in mid-2018. Its developers aim to make it the first retail development in the world to achieve the Living Building Challenge (LBC) certification. LBC-certified buildings have zero carbon footprint; zero waste; produce more electricity and water than they use; grow agriculture on 20 per cent of the site; and are built using non-toxic and recycled materials. “I’m pretty sure there won’t be another shopping centre in Australia with this many solar panels,” Bakker says.
The carbon footprint of every material used in construction will be meticulously calculated.
“It’s right down to the very finest details,” Bakker says. “Even the concrete – how it’s made, the recycled content of it. The highest that’s been achieved is 80 per cent recycled content but [Frasers is] saying, ‘Let’s see if we can get it up to 90’.”
The farm will feature dedicated crop areas and greenhouses, and will grow around 55 to 60 kinds of seasonal plants.
“There will be lots of lemongrass, lemon verbena and herbs, but also a hell of a lot of cucumbers,” Bakker says. “We’re growing crops that are water and nutrient hungry, because we will obviously have a lot of recycled water and compost.”
All the property’s organic waste will be mulched for the rooftop farm, and coffee waste from its cafes will go to mushroom cultivation.
“The site was once an apple orchard and [the developers] have done a lot of research to source the same types of apples that used to grow here,” Bakker says. “There’s a South East Asian community nearby, so we’ve incorporated things like kaffir limes and plants that are used by that community. We want it to be a real community hub.”