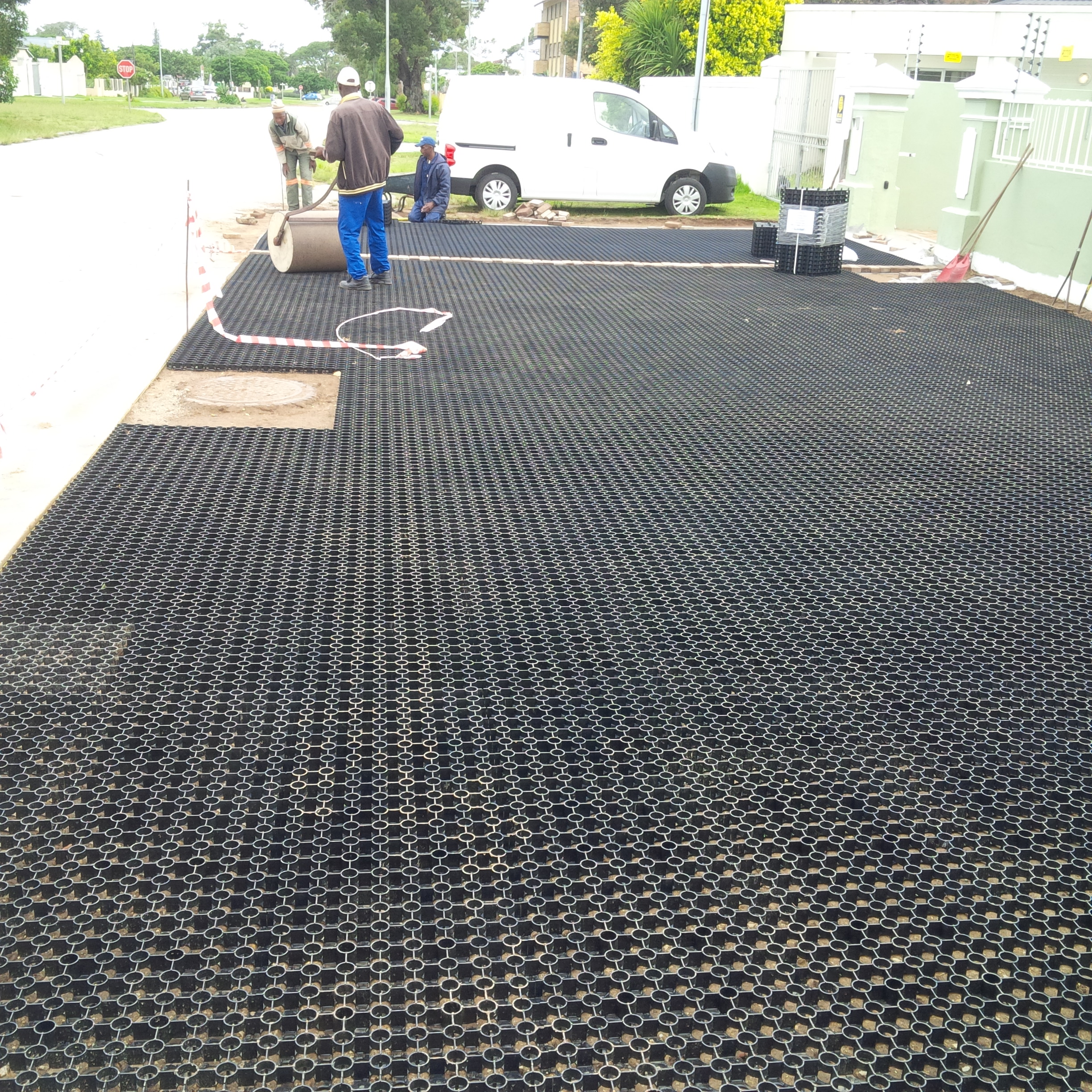 Kaytech has recently won the rights as the sole distributor of Sudpave, a locally manufactured, high quality paving grid that complies with the requirements of Sustainable Urban Drainage Systems (SUDS). Rapid urban growth in South Africa has created an unprecedented increase in hard surface areas, such that conventional stormwater infrastructure can no longer cope with the resultant high level of rainwater run-off which, in extreme conditions, often leads to severe flooding. The quest by municipalities for alternative methods of stormwater control led to the development of Sudpave, a unique, permeable paving approach to stormwater control.

Sudpave is a plastic grid paver with an open cell structure, either gravel-filled or grass-planted depending on load bearing requirements. Rain is able to soak through the permeable paved area at the point of contact, thereby minimising the problem of run-off. Importantly for drought-prone South Africa, by infiltrating the ground naturally, this rainwater replenishes ground water and aquifers. Environmentallysound, Sudpave ensures pollutants such as car oil and brake dust are not conveyed by run-off into streams and rivers but are filtered out and broken down by natural microbial action.

Produced from locally sourced recycled material and resources, Sudpave is nontoxic and chemically inert to the chemicals naturally found in soils. It is suitable for a wide variety of applications including car parks, emergency access routes, wheelchair access, aircraft taxiways, helipads and equestrian arenas.
One such application of Sudpave took place at Walmer Pre-Primary School in Port Elizabeth where a grassed verge served as the daily drop-off and pick-up zone for young scholars. A problem occurred on rainy days when the sparsely-grassed trafficked areas became water-logged, muddy and difficult to negotiate. Instead of
2
replacing the aesthetically pleasing natural verge, 600 m2 of Sudpave was installed, creating a combination of gravel driveway and grassed verge parking. This proved to be a highly successful and economical project, satisfying all stakeholders.

Installing Sudpave delivers many benefits, some of which include: accelerated installation with no pinning required excepting excessive gradients; suitability for hot and cold climates due to its expansion and contraction capabilities; less wastage as pavers can be incrementally off-set and connected to accommodate curves and obstructions; as well as reducing the incidence of flooding. Sudpave can also be used in conjunction with a water recycling system as a catchment source.

South Africa’s first locally manufactured permeable paving grid, Sudpave is another example of Kaytech’s commitment to sustainability as well as supplying only the highest quality products.
For more information on this Product , visit www.kaytech.co.za