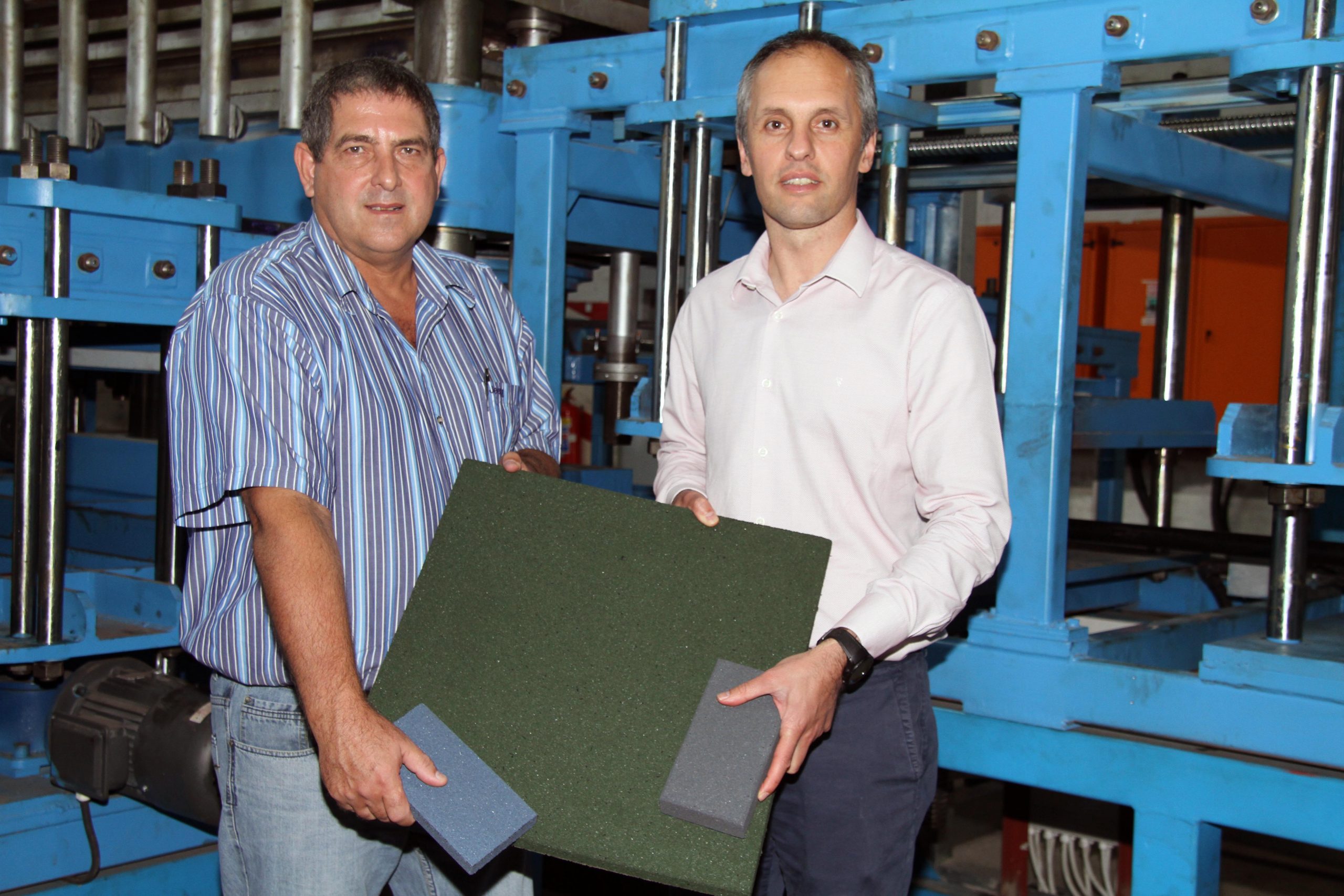 Cape Town based MasterFibre, leaders in the manufacture and installation of recycled rubber fibre matting and moulded products made from recycled tyres, and PFE International have announced a strategic joint venture that will see the two entities combine their manufacturing, marketing and distribution facilities nationally.
Speaking after the signing of a deal that will create MasterFibre South Africa, PFE International CEO, Dr Mehran Zarrebini, explained that all manufacturing of moulded products would now take place at Van Dyck’s factory in Prospecton, Durban.
The Cape Town operation will be responsible for smaller, customized products only.
Raw materials will be supplied by South Africa’s largest truck tyre recycler, Mathe Group. This Hammarsdale operation is part of the multinational group PFE International of which Van Dyck Floors is part.
In addition to offering benefits associated with vertical integration, this will increase manufacturing capacity 10 fold whilst- freeing MasterFibre managing director, Aldo Steyn, and his team up to do what they do best – product and market development.
Steyn said that the joint venture – effective from the end of April – would in no way change the existing services offered by MasterFibre. However, the additional manufacturing capacity would enable the company to increase both the number and size of orders.
As an innovator in this space, Steyn was one of the very first to begin selling moulded rubber products, including tiles and pavers, into the South African market.
“Our biggest claim to fame is the moulded products. I started by making these products by hand and then brought in machines. Up until then, they were being imported at a very high cost. Even now, not a lot of others are doing this. We’re building the market from scratch,” he explained.
A civil engineer by training, Steyn added a number of innovative products to MasterFibre’s basic rubber matting offering when he took over the company in 2007. These included rubber safety mats for children’s playgrounds, doormats and rubber mats with customised logos for businesses, specialized mats for horse boxes and equestrian use, ballistic products and tiles for shooting ranges.
Van Dyck Floors manufactures rubber flooring and paving and acoustic cradles and underlays for carpets which are sold locally and exported to 50 countries across the world.
Zarrebini said that, in 2016, Van Dyck had invested in a sample line to manufacture additional products including paving mats and rubber pavers. This had proved successful and the company had invested in two larger machines that could produce 1m x 1m products and interlocking paving mats.
Van Dyck invested in a further two units to produce moulded rubber flooring products measuring 2m x 1m and automated the process last year.
“This investment has given us much more flexibility and increased production capacity substantially. We have also invested in new moulds. Where we could initially produce bricks, pavers and 1m x 1m interlocking mats, now we have 1 metre honeycomb pavers and we are able to produce kerbs for the 1m x 1m mats. The increased automation will also improve our manufacturing efficiency,” he said.
The new lines were commissioned in April 2018.
Steyn said that, with additional access to Van Dyck’s manufacturing, MasterFibre could cut down on lead times on orders significantly.
The new joint venture would also see the introduction of a number of new products and colours both immediately and over the next year. These include the development of flexi grids for the agricultural and mining industries.
However, one of the strongest growth areas for the new joint venture is rubber moulded products for children’s playgrounds and sporting facilities.
MasterFibre products have been tested by an independent laboratory and fully comply with all standards set by the South African Bureau of Standards in terms of the stringent South African National Standards (SANS) Regulations for Safety which applies to all playground equipment and surfaces.
MasterFibre South Africa is also adding playground products manufactured from synthetic EPDM which is UV resistant and extremely durable and is particularly appealing to those developing high end facilities worth more than R15 million.
Zarrebini said that the new joint venture would enable MasterFibre to tap into Van Dyck’s extensive regional logistics and distribution system with a view to growing its national footprint. It can also access Van Dyck’s extensive network of influential architects, specifiers and contractors.
Already, the rebranded company has set up its first office in KwaZulu-Natal at Van Dyck’s Durban head office.
Captions:
3529: Aldo Steyn, MasterFibre MD and Mehran Zarrebini. PFE International CEO are pictured with some of the finished moulded rubber products being marketed by MasterFibre.
3542 & 3550: Aldo Steyn and Mehran Zarrebini pictured with one of the machines in the Durban factory that manufacture MasterFibre moulded rubber products.
(730 words)
Ends.