Growing a business and flourishing in farming 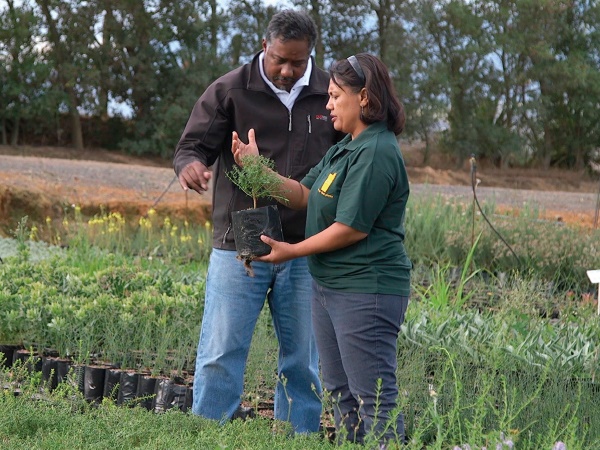 This self-proclaimed “rural girl” from Abbotsdale and her partner, Elton, are gaining ground in the agricultural sector. (In the horticulture sector too)

YOU may have seen her face on potted fynbos plants sold at Woolworths – one of Jacqueline “Jacky” Goliath’s many business highlights. And while Jacky may often serve as the face of the business, Elton Jefthas completes the dynamic duo behind the award-winning De Fynne wholesale nursery in Paarl. Together the two have turned their entrepreneurial dreams and passion for fynbos into a fully-fledged business, boasting fruitful yields and partnerships with some of the biggest retailers in South Africa. They started the business in 2001 in Elton’s backyard, based on their passion for fynbos and a demand in the market for water-wise plants.
They planted 1 000 fynbos plants which they sold, and as their dreams to diversify grew, they rented larger and larger pieces of land before renting their current 22-hectare farm through the Department of Rural Development in 2003. Jacky later took the leap to focus on farming full-time and became managing director of the business, and today she “wouldn’t change anything”.
Jacky and Elton met while completing their studies in horticulture at Peninsula Technikon – studies they completed in 1995. Their paths crossed again in 1999 when they both worked at the Agricultural Research Council where they developed a keen understanding of fynbos and indigenous plants, before they moved to the NGO Agribusiness in Sustainable Natural African Plant Products (where Elton is still the acting CEO). Here they worked on developing successful businesses in the agricultural sector.
Jacky attributes their success to their complementing personalities – she’s more practical and hands-on, running the farm, whereas Elton is more strategic and business-oriented. “It’s usually a very male-dominated industry. It was even more challenging as a previously disadvantaged black man and woman with no money or land,” Jacky adds.

Today their flourishing nursery boasts an array of over 500 000 fynbos and indigenous plants, as well as plants like figs, strawberries and even a plum orchard, of which they export most of the harvest.
De Fynne also grows plants on contract for nurseries. They supply major retailers such as Woolworths, with whom they partnered more than eight years ago and continue to undertake more endeavours, as well as supplying plants to Massmart, Stodels and other commercial farmers and wine estates. Jacky and De Fynne have won a host of awards based on how well the farm is run and the quality of their crops, but she shares the accolades with the 28-strong staff members, “I like to bring the awards back to the people. You need to build relationships.” Jacky and Elton are working towards owning the land they are leasing and expanding the nursery.

Check out the video and learn more about Jacky and Elton on www.drum.co.za.