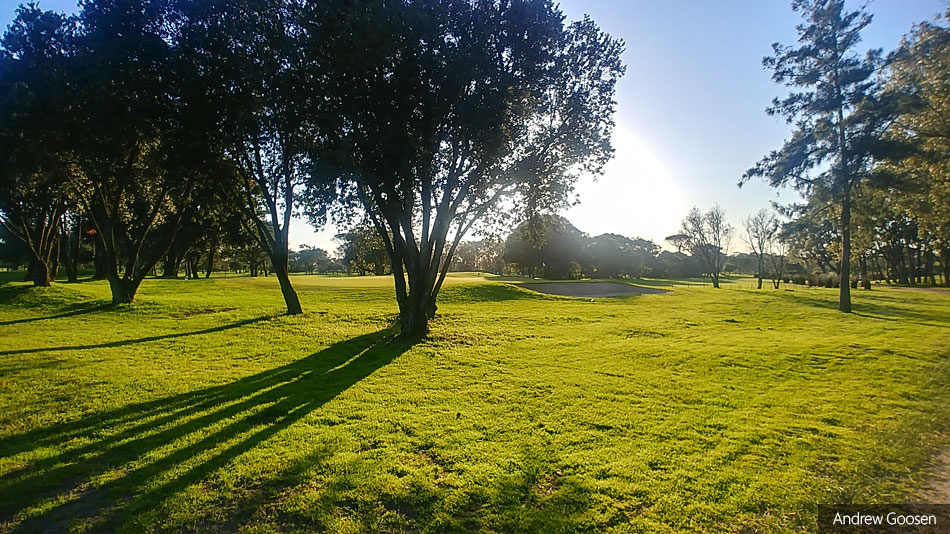 This Article was written by Richard Humphreys

Andrew Goosen of The Morris Golf Co. has started work on a landscape restoration project on the oldest golf course in South Africa, at Royal Cape Golf Club in Wynberg.
Royal Cape appointed Goosen to assist with a number of course improvements. Initial work on the eighth hole includes improved landscaping and the removal of a number of exotic trees, with the original Charles Murray design in mind. “We have just finished on the eighth, with seeding and planting to happen next,” said Goosen. “The fourteenth will follow.
“The most exciting aspect of this work and the potential master plan is the restoration of the indigenous and endemic landscape,” he continued. “A combination of our drought last year and an out-of-control beetle that is starting to decimate the parklands means that Royal Cape, and others, are being forced to review, almost entirely, their landscapes for the immediate and long term.”
Royal Cape’s golf course superintendent Gaeren Wilkinson said: “The Royal Cape golf course is built on the Cape Flats Sand Fynbos belt, yet despite its association with flat sandy plains, the Cape Flats is also an extensive wetland and home to unique sand fynbos vegetation that has come under extreme urbanisation pressure.
“There is a rich diversity of plants in the area, many of which are critically endangered or no longer occur in the wild. Royal Cape, with the help and expertise of Caitlin von Witt from Fynbos LIFE and its Cape Flats Fynbos Nursery, have started to reintroduce a number of these locally adapted plants on the course, not only to replace exotic species, but to attempt to ensure their long-term survival.”
Fynbos Rehabilitation Ecologist Caitlin von Witt, who visited the course in 2015, said: “Populations of the endangered plants that still occur on the course, including the critically endangered vygie lampranthus stenus, have been bolstered through propagation, and large sections of the rough rehabilitated with diverse locally indigenous water-wise species. Seasonal wetland plants such as the ‘lost and found heath’, Erica verticillata, now extinct on the Cape Flats, as well as the critically endangered ‘pearl heath’, Erica margaritacea, known only from the nearby Kenilworth Racecourse conservation area, have been planted in wetlands on the course.
“By rehabilitating the rough, Royal Cape preserves these threatened plants and acts as an important urban biodiversity corridor for wildlife to forage and shelter between the Table Mountain National Park and the city’s nature reserves. The plants will additionally assist with berm stabilisation in the dry rough and improve groundwater recharge quality in the wetlands.
“Royal Cape superintendent Gaeren Wilkinson and I discussed the importance of Royal Cape as a biodiversity corridor, given its situation in the critically endangered Cape Flats Sand Fynbos vegetation type, of which only 14 percent remains with one percent conserved. Planting started soon thereafter, and this winter we rehabilitated two to three hectares of the rough with no less than 53 locally indigenous plant species from our Cape Flats Fynbos Nursery.
“But it’s not only about the wildlife, these plants have a significant function stabilising the sandy berms between the fairways, as well as improving water quality and groundwater recharge in the wetlands,” said von Witt. “Golfers local and international are invited to discover Cape Town’s natural heritage on the course and to enjoy the aesthetically-pleasing, wild nature of the rehabilitated areas. It is hoped that these may even add a positive element to searching for the occasional stray ball in the rough.”
“The drought that the Western Cape has been experiencing over the past few years has forced us to look closely at our water usage,” said Wilkinson. “As there are no natural water sources on the course all our water is harvested from stormwater canals and run-off during the wet winter period and stored in dams. The course makes no use of potable water for irrigation and even day-to-day cleaning of equipment is done with harvested water.
“Royal Cape fortunately lends its self to being more of a links style course and water usage was cut by 60 percent on tees and fairways. A large percentage of the savings were through the installation and use of part circle rotors, ensuring only in-play areas were irrigated. Wetting agents were extensively used on the course to ensure minimal water loss.
“Greens were irrigated twice a week and then topped up as needed with hand watering, which was kept to a bare minimum, reducing consumption by more than 40 percent. With the reduction in watering there was a noticeable reduction of thatch and almost no fungal diseases.
“The result was firm fast, healthy greens and fairways that were a bit on the dry side but very playable. Fairways were regularly verti-drained and hollow-tyned which has resulted in deep rooting and quick recovery once the winter rains finally came.
“The biggest lesson learned was how little water is needed and not how much water is needed,” said Wilkinson.
Goosen concluded: “Golf courses that both feature in the top rankings and those that are the most enjoyable to play are those that have an authenticity with their landscape, they are better courses. One of our primary objectives at Royal Cape is for the course to have this authenticity with its immediate environment. This will undoubtedly craft Royal Cape into a better golf course.”