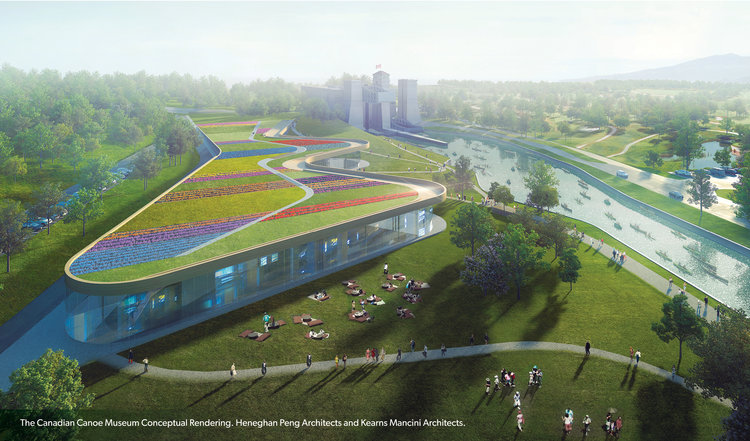 The Canadian Canoe Museum has announced that the Dalglish Family Foundation has made a $1.2 million commitment to its capital campaign.
Camilla and Peter Dalglish, directors of the foundation and longtime supporters of the organization (see photo below), were at the museum on Monday (November 13th) for the announcement of the generous gift, which will support capital costs for the new facility to be built along the Peterborough Lift Lock on the Trent-Severn Waterway. The new museum’s 1.5-acre green roof—with its accessible boardwalk, extensive pollinator gardens and exhilarating views of the National Historic Site—will be named in their honour.

The 83,400 square-foot facility has been designed by the award-winning team of Dublin, Ireland-based heneghan peng and Toronto-based Kearns Mancini Architects. The building—purpose-built for the world’s largest collection of canoes, kayaks and paddled watercraft—will blend almost seamlessly into its landscape, emerging from the drumlin and complementing and contouring the waterway.
The roof will welcome visitors of all ages and abilities, and encourage them to explore the spaces along a boardwalk—inspired by the High Line public park in New York City. The roof will feature up to 50 local plant species, including a wildflower meadow. Many of the species are of significance to Indigenous cultures in the area, and have been chosen because they will bloom at various times of the year and thrive in the climate and conditions.

The outdoor spaces at the new museum—including the roof and the waterway—will allow programming to flourish as visitors will have integrated experiences that include its world-class collection. The roof will be among the areas that will allow for ecological exploration and experimentation.

To view the original version of this news story, please click here