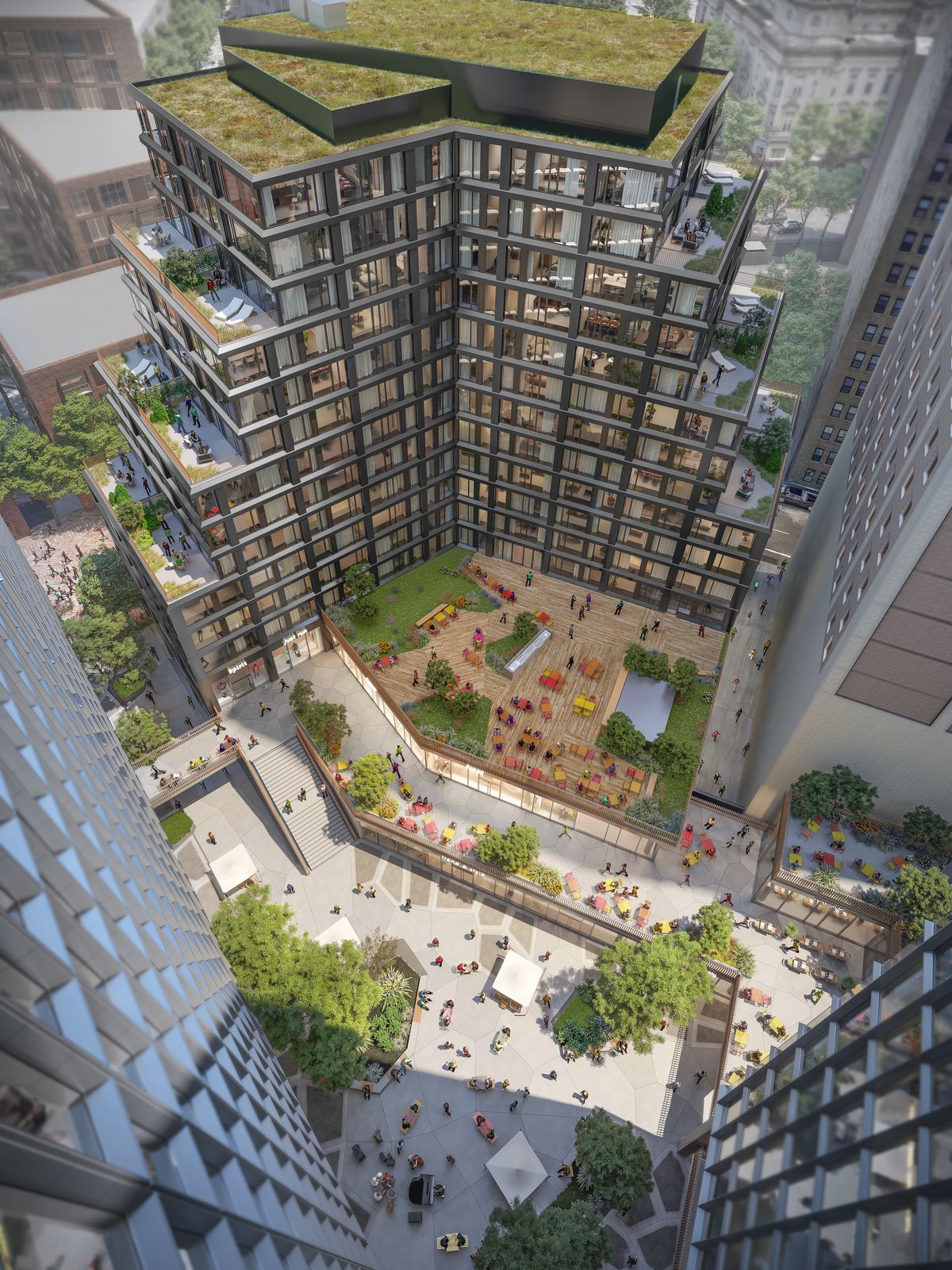 One of Detroit’s largest developments officially broke ground today. Dan Gilbert’s Monroe Blocks will bring an office tower, residential, and green space to the area between Campus Martius and Greektown.

“The world’s most innovative professionals and companies demand an environment that inspires and has a positive impact the surrounding area,” said Dan Gilbert. “Monroe Blocks places ample open space and cutting-edge technology at the literal center of the city, while offering a new landmark gathering place for Detroiters and visitors alike.”

The development is divided into two sections, with the 35-story office tower and a 17-story residential building rising on Block A—closer to Campus Martius—and more residential buildings going up on Block B—closer to Greektown. Farmer Street, which runs through the middle, will close to vehicular traffic. Nearly two acres of land will be converted into public space.

One of the contentious pieces of this development from the beginning has been the fate of the National Theatre. It’s the only theater designed by Albert Kahn, and the only remaining building of what used to be a thriving entertainment district. Bedrock plans on keeping the facade, restoring it, and using it to span a pedestrian walkway within the development.

Speakers noted the historical significance of the site: it was once a thriving, walkable urban district and it will return to that with this project. In a video presented at the press conference, Maurice Cox, Director of Detroit’s Planning Department, said this could be the Rockefeller Center of Detroit.

The architects on the project are local firm Neumann/Smith Architecture and Danish firm Schmidt Hammer Lassen. This is Schmidt Hammer Lassen’s first project in the United States. Partner and Design Director Kristian Ahlmark says of the Monroe Blocks project, “Monroe Blocks is a project with a striking sense of place that connects people and spaces on a physical, social and cultural level. New pedestrian thoroughfares reintroduce openness and urban porosity that this area of downtown Detroit has been missing for decades.”

“During the design process, we were heavily inspired by Detroit’s strong architectural gems and original masterplan by Augustus Woodward,” said Ahlmark. “Monroe Blocks will recreate this destination for work and leisure, and will move people through the downtown area in new ways that we hope will inspire them to rediscover the city.”

The Monroe Blocks, along with the tower at the Hudson’s site, will change the skyline of Detroit. Both are expected to be completed by the end of 2022.

“Monroe Blocks is the kind of special project that only comes along once or twice over the course of a career in architecture,” said Ahlmark. “To be a part of a project this culturally significant that will play a part in the revitalization of such a treasured city is an honor and a privilege.”

THIS WAS PUBLISHED FIRST ON CURBED DETROIT: for the original click here