Corobrik invests in the future 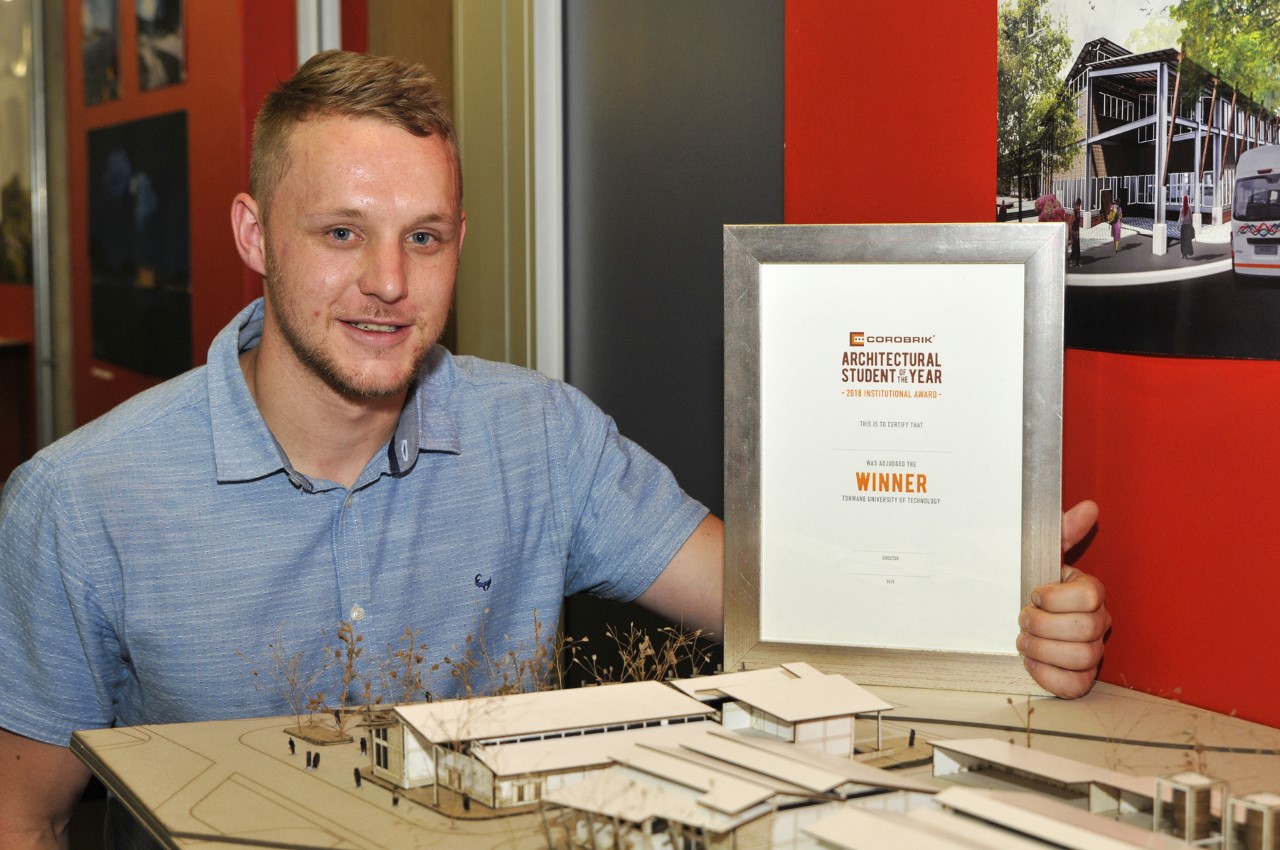 Corobrik’s ongoing investment in new production facilities, new technologies, new products and the architects of the future have combined to open a whole world of new possibilities in brick architecture.

The 32nd Corobrik Architectural Student of the Year Award, which will be announced in Johannesburg in May 2019, is one such commitment to innovation and the future of South Africa’s built environment.

Ruan Jansen van Rensburg from the Tshwane University of Technology, is this year’s regional winner. In addition to his prize of R10 0000, he will go on to compete against seven other talents from tertiary institutions countrywide for the national award.

Kyle Coulson, who collected a cheque worth R8 000, was placed second. Carla Schmidt, collected a third prize of R6 000 while Siyanda Nkosi received R6 000 for the best use of clay masonry.

Ruan Jansen van Rensburg dissertation is entitled ‘The design of an innovation farm’ – an experiential facility for Cannabis plants as an alternative resource in Eerste Fabrieke, Mamelodi.

Jansen van Rensburg says the project proposes an innovation farm adjacent to the Eerste Fabrieke train station in Mamelodi. This farm is an attempt to contribute responsibly to the dilapidated socio-economic structures and provide the community with educational platforms to strengthen self-sufficiency while contributing to micro-economies in the area.

The investigation deals with two core ideas and the Innovation farm mediates between them. On the one side, the project investigates Mamelodi, specifically Eerste fabrieke station and its surrounding neighbourhoods as experimental ground for this study, and on the other side, the positive attributes of Cannabis plants specifically cannabis sativa (industrial hemp), as an accessible and affordable alternative resource, predominantly as a construction material in an underdeveloped context.

In second place Kyle Coulson project is titled Space Lab.  It is a space centre for The South African National Space Agency (SANSA).  The project took a speech delivered by Naledi Pandor in 2011 where she announced a 20-year launch plan for the country as the starting block. The African Union Space Strategy document also pointed to the importance of Africa reaching space.  Therefore, Space Lab proposes to be the main launch complex for the African continent and only launch medium-sized rockets that carry small to micro-sized satellites into orbit.

Carla Liza Schmidt’s thesis is entitled ‘The Design of an Education-centred Mixed-use Redevelopment in Central Pretoria.’

The dissertation focuses on the design of a learning commons for a teachers’ training academy in the Pretoria CBD.   This emanated from a broader concern that originated in the search for a strategy to address the degeneration of Norman Eaton’s 1959 Wachthuis and Polley’s arcade: – an architectural landmark of Pretoria architecture.

For the best use of clay, Siyanda Nkosi’s thesis is ‘The design of a centre for intangible heritage of Zulu culture’  It is situated at the Royal National Park in KwaZulu-Natal.

The study was conducted to honour the forgotten memory of the northern Zulu tribe called the Amazizi. The project focuses on the tribe’s rituals practices and spaces can be translated into an architecture. Clay bricks are made from natural materials and work as a good building and cladding material to give feel of the spiritual spaces, they offer superior resilience against moisture control, fire and high winds to withstand weather conditions on site.

Musa Shangase, Corobrik Commercial Director pointed out that Corobrik, which has been part of the economic and construction landscape of South Africa for 117 years, was investing in significantly boosting local production capacity. It currently produces a billion bricks per year and sells about four million bricks per working day.

A R800 million mega factory that will be built alongside its existing Driefontein factory in Gauteng, the largest project of its kind underway worldwide at present, will be the biggest and most environmentally friendly in Africa.

This will be followed by another mega factory on the East Rand and expansion in the Western Cape within the next five to six years.

“As a leading manufacturer of clay brick and related products, Corobrik is firmly committed to innovation and excited about being at the forefront of change. These new facilities will create much needed jobs and signify a vote of confidence in the future of our country,” Shangase said.

He added that supporting both newcomers and existing member of the architectural profession was an extension of this commitment.

As a result, Corobrik has embraced new technology and is developing new products that will shape the future built environment in South Africa. It recently commissioned the latest (Building Information Modelling) BIM files which can now be downloaded from its website by architects and other property development professionals.

“Today’s young professionals are looking for rapid and meaningful solutions backed by superior technology and connectivity.   BIM represents a new way of working based on a far broader and shared intelligent technological platform that is compatible with all architectural software,” Shangase said.

Research and development has also led to the launch of innovative new products such as Corobrik’s new Black Brick facebrick.

“This takes facebrick into the new age of modern, dramatic architecture. When combined with other textures and colours or even used alone, these exciting new products together with the use of new mortars, different bonds and contrasting patterns has helped create a powerful contemporary signature,” he concluded.

Caption:  Ruan Jansen van Rensburg from the Tshwane University of Technology is the winner of the Corobrik Architectural Student of the Year regional event.   His thesis is entitled ‘The design of an innovation farm’ – an experiential facility for Cannabis plants as an alternative resource in Eerste Fabrieke, Mamelodi.

This release has been prepared and distributed for Corobrik (Pty) Ltd