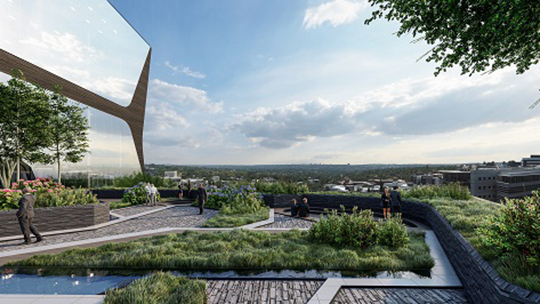 The application of Virtual Reality (VR) in architecture stands to become an invaluable resource as the technology evolves to the point where multiple people can partake in the same VR session, either in the design process itself, or when used to present a building design.

This has resulted in architecture and interior architecture group Paragon promoting the use of VR headsets in order to give their clients a better understanding of design proposals, according to 3D Visualisation Manager Emile Maritz.

Both VR and Augmented Reality (AR) media have developed from mainly viewing 360° images using a smartphone in conjunction with Google Box, or similar cardboard VR viewers, or a Samsung Gear headset, to fully interactive VR-walkthroughs and 360° video fly-throughs with a high-powered mobile workstation and a HTC Vive headset.

“Clients have reacted extremely positively,” Maritz comments. VR headsets allow clients to be immersed in a virtual representation of any space in and around a building. Different elements of the design can be viewed from any angle possible.

VR/AR media can be applied to any building project type. All areas of architecture can be visualised with the help of VR, from specific design elements to furniture, building systems and material finishes, to name but a few.

VR headsets immerse clients in a virtual representation of any space in and around a building.

A leading developer of VR headsets has even released a model that eliminates the need for a high-powered workstation, which current-generation VR headsets need in order to function. This slashes the overall production cost of VR media, and makes it possible to have VR presentations anywhere requested by clients, and not only in a pre-setup location.

“The impact of VR/AR is twofold, namely on the client’s side and on the architect’s side,” Maritz highlights. While it allows clients to see their choices applied in relevant spaces and on buildings, architects get an overarching view of how all of the design elements interact, and can translate their ideas easily for both colleagues and clients as a result.

Maritz completed his Visual Communication Design degree (BA. Vis. Comm.) at The Openwindow School of Visual Communication in 2007, majoring in game and graphic design. He began his career at Paragon in August 2010 as a graphic designer and visualisation artist. From 2013 to late 2016, he was responsible for 3D visualisation, namely renders and fly-throughs, of all of the group’s prospective building projects.