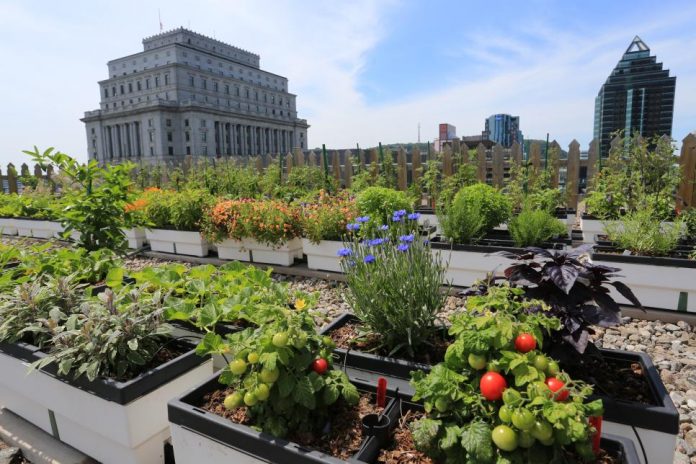 South Africa is set to construct rooftop gardens up amid the skyline of Johannesburg in bid to increase commercial production of salads and vegetables in the country.

According to Future Farms, the company contracted for the project, The basis of the farms is an A-frame holding 600 plants, grown with nutrient film technique (NFT). The A-frames are supplemented by beds filled with a medium of coconut husk, perlite, vermiculite and probiotic for crops that need to be planted in greater density, like baby spinach, rocket or parsley.

It is estimated that each rooftop garden needs six such frames to produce a minimum of 3,600 plants during each month-long cycle. Due to the LED lighting panel redesigned by Future Farms to bring down costs, as well as the re circulation of water in a hydroponic system, the electricity and water bill for each rooftop garden will come to far below US $72 a month.

No automatic ventilation or fertigation will be needed for the gardens however, there will be an extra steel in the frame to cope with wind sheer up above the city.

“We started with blue and red light but we’ve moved away from that completely to full spectrum lights because we found out that with blue and red that the plants would grow but it was just missing something, it doesn’t round the plant off nicely,” said Jeremy Rich of Future Farms.

Future Farms work primarily on large-scale commercial hydroponic farms, based on their dual system approach using both containers and tunnels, done on a cost basis appropriate for the developing world and beyond. In the containers every aspect of the growing cycle is controlled, allowing a growth cycle from seed to a 250g head of lettuce within 28 days.

The community will be the largest shareholder in the farm, run by local entrepreneurs who have cut their teeth at the school farm, supplying produce to a large retailer.

This article was written by njeringaru for the Construction Review Online. Click here to view