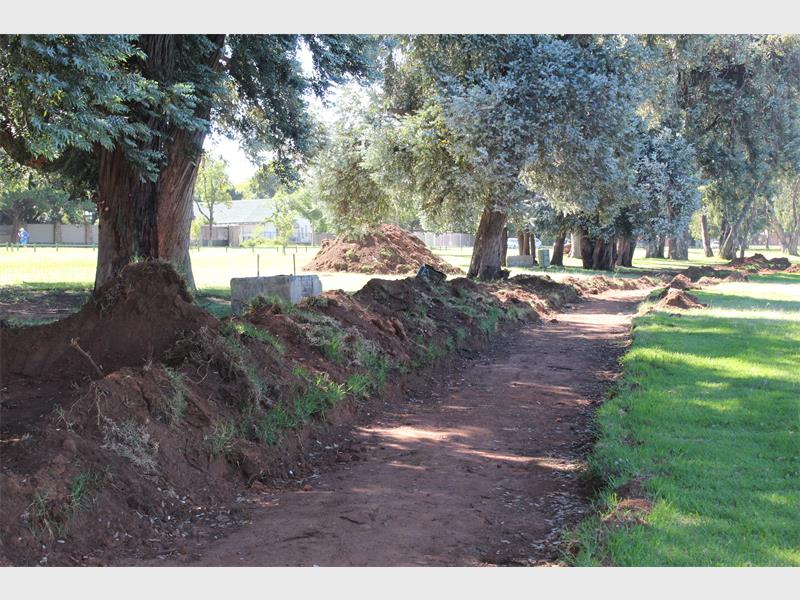 The park at Homestead Dam, in Farrarmere, is currently undergoing a R1-million upgrade, according to Ward 28 councillor Malanie Haggard.

“We were given a budget by the Parks and Recreational Department and we chose to upgrade Homestead with this by building a walkway,” said Haggard.

“The walkway will start in Kei Road (where paving has already commenced) and stretch into the park itself for at least one kilometre.

“This project will take between two to three years to complete and is budget dependent.

“In addition to the walkway, benches, braai areas, more dustbins, additional swings and more gym equipment will be introduced to the park.

“The construction for the project began in October.

“However, the workers were digging the trench alongside the road and I felt that would not benefit anyone as if the paving was situated there people may as well walk on the pavement.

“I then requested that it be built closer to the water body.

“According to legalities and specifications, the walkway has to be at least 30m away from the water body which we have now achieved.”

Haggard said the new Homestead Parkrun will benefit greatly from the upgrades.

“We are in the process of reviving Homestead.

“During the parkrun, vagrants that were sleeping here got up and left, proving that more active involvement by community members will help to decrease social-ills.

“The parks department was also shocked with the number of people who participated in the recent parkrun, which was around 400 to 500, and, as such, we are currently in talks about upgrading the ablution facilities.”

Haggard added that in due course, budget permitting, the walkway will be extended, resulting in the total amount spent on the upgrade project totalling R2-m.

Divisional head of communication and media relations for the Ekurhuleni metro Nhlanhla Cebekhulu said the upgrades will be complete by June.

“Homestead Dam is currently being upgraded through hard and soft landscaping,” said Cebekhulu.

“The project is implemented through the Development Bank of South Africa.

“The project commenced in October 2018 and will be completed in June this year.

Cebekhulu said the budgeted R1-m in the current financial year to ensure the implementation as follows:

• Supply, delivery and installation of signage.

“Currently the project is at 26 percent completionW

Haggard said despite the upgrades at the dam, members of the public were upset regarding the funds used to upgrade the park and felt the funds should be used towards the hyacinth crisis facing Benoni’s water bodies.

“The hyacinth issues fall under the environmental and water and sanitation departments,” said the councillor.

“Therefore, the park upgrade falls under the parks department.

“Each department has its own budget.

“The sewage flowing into the dams does not fall into the parks department.

“If we did not opt to upgrade the park the funds would have been used elsewhere in the department.”

Meanwhile, the Ekurhuleni metro has stated the hyacinth in Benoni will be removed by May from most water bodies with Middle Lake hyacinth removal set to be completed by June.

This Article First Appeared in the Benoni City Times. For more click here