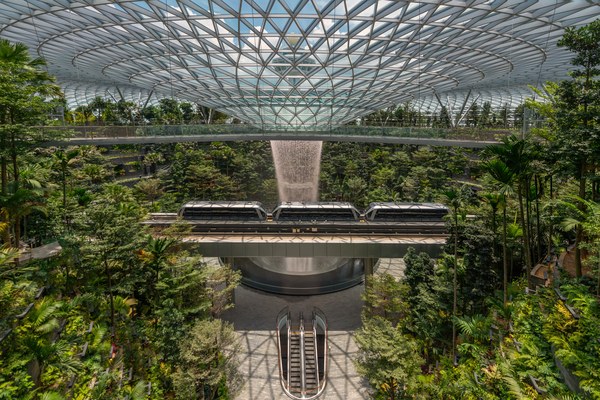 Jewel Changi Airport includes the world’s largest waterfall, a five-story garden, and 280 retail stores and eateries—adding much to the “world’s best” airport

Written By: Elizabeth Fazzare FOr The Architectural Digest

Singapore‘s Changi Airport is known globally for its visitor experience. In addition to the typical shopping and dining amenities, its terminals are packed with attractions. Terminal 1 boasts a cactus garden, a water lily garden, and a discovery garden, while Terminal 2 plays host to an LED-enhanced “enchanted garden,” a 700-flower orchid garden, and a cheery sunflower-packed rooftop. In Terminal 3, one thousand butterflies live in a tropical habitat—the world’s first butterfly garden in an airport—and visitors can take a ride down the world’s tallest slide in an airport. Singaporean history is the focus of Terminal 4, where exhibits, galleries, and architecture reflect the Peranakan culture. Not to mention the entire airport is activated with public art. It’s all part of what makes the airport the “world’s best,” according to the [2019 Skytrax World Airport Awards].(https://www.worldairportawards.com/) (Changi has now won the accolade nine years in a row.)

So when architect Moshe Safdie, whose career was launched by his thesis project turned Expo 67 building Habitat 67 in Montreal, won the international competition to design a new transportation hub for the airport, he set out to design it not just as a destination, but an “uplifting and vibrant urban center.” Goal achieved. Jewel, as it’s known, is a 1,460,660-square-foot (135,700-square-meter) glass toroidal building that encloses over 235,000 square feet (21,832 square meters) of landscaping, including a five-story garden (called Forest Valley), made up of more than 200 plant species, with walking trails. Puncturing through the doughnut-shaped structure, slightly off-center, is the 131-foot-tall (40-meter-tall) Rain Vortex, the world’s tallest indoor waterfall that falls seven stories from the roof’s oculus. The feature recirculates rain water to cool the indoor environment and for reuse—in addition to providing the visual drama of seven stories of water dropping in a cylindrical shape from the sky. On its fifth level, a 150,695-square-foot Canopy Park includes a suspended bridge, mazes, slides, an animal topiary, and mist gardens. And to top it all off, Jewel hosts 280 retail stories and eateries and an in-airport hotel.

As its most basic function, Jewel serves as a transit hub: Pedestrian connections can be made there to Changi Airport terminals one, two, and three, and it is linked directly to the city’s public transportation system. But its incredible design—an architectural feat of a façade, made possible by consultation with BuroHappold Engineering; a rich, invented, and inviting landscape developed hand in hand with PWP Landscape Architecture; and its dedication to climate-sensitive visual delights make it so much more. AD asked Safdie to explain, in his own words, how he conceived Jewel as something far beyond a standard airport hub, as a civic space for those even without an airplane ticket.

AD: Explain the design decision behind envisioning Jewel as a garden. Why is it the best solution for this project and how did you come to that conclusion?

Moshe Safdie: The request for proposals outlined the basic functional components—airport operations, restaurants and cafés, retail offerings, and an undefined “attraction.” More than any other great city in the world, Singapore is truly a city in nature—what could be more quintessentially Singaporean than a grand public garden? Jewel combines two environments, an intense marketplace and a paradise garden, to dramatically assert the idea of the airport as an uplifting and vibrant urban center. We recognized from the outset that the marketplace and the garden need to cohabit, but be separate. Each is in its own environment and in its own right. I came up with the idea of the mystical paradise garden that would be appropriate for an airport and that is a place of serenity and repose.

AD: How is Jewel designed to engage the community? How will it change conventions about the function of an airport?

MS: Through its programming and attractions, Changi Airport has moved beyond the idea of the airport as purely a transportation hub. No other airport, no other transportation hub is so thoroughly an extension of civic life. Changi has long been a place for the community to gather and celebrate. Jewel transcends this notion even further by creating an interactive civic plaza, for travelers and Singaporeans alike. It’s positioned outside of terminals and before security checkpoints, and directly linked to public transportation—it is entirely publicly accessible. The Forest Valley offers a communal moment of repose, and other elements like treetop walking trails, the waterfall, and hedge and mirror mazes will delight visitors, create a sense of wonder and discovery, and provide spaces for community building. With Jewel, the airport has become a destination in its own right.

AD: Logistically, Jewel is a transit hub for the Changi airport, connecting terminals and public transportation. Beyond its garden and shopping design elements, how did you design these connections for maximum traveler efficiency?

MS: Directly connected to Terminal 1 and to Terminals 2 and 3 via pedestrian bridges, Jewel engages both in-transit passengers as well as the public at large. Each of the cardinal axes—north, south, east, and west—is reinforced by gateway gardens that orient the visitors and offer visual connections between the internal program elements of Jewel and the other airport terminals.

AD: Why is a transit hub also an opportunity for civic space?

MS: Jewel presents a new building prototype for connecting the city and the airport. Like an ancient Greek agora, it aligns social and commercial values to create an animated public-realm destination.

AD: Do you see this kind of terminal as one that could be replicated elsewhere in the world, or do you feel it is specifically well matched for Singapore or Asia in general?

MS: Jewel is a bespoke design, crafted in response to the design brief and its particular location and setting. Local culture, heritage, and climate inform the design. That being said, to create Jewel is to conceive of a design in which architecture and landscape are totally integrated. Landscape is not an add-on feature, or an optional embellishment, but rather a fundamental component of space. Its deployment creates the opportunity for a new kind of spatial experience, one that specifically echoes and celebrates Singapore’s reputation as the Garden City—but, at its heart, is a humanistic response that is not bound to a particular locale.

This Story was taken from The Architectural Digest. For more click here