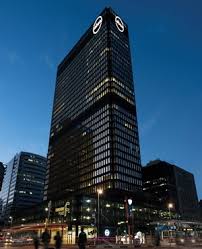 An iconic 70’s high-rise in Cape Town’s downtown financial district is being redeveloped into a unique mixed-use building called Foreshore Place, which will feature 34 storeys of ultra-modern, luxury residential and commercial premises.

Situated on the corner of Adderley Street, Riebeek Street and St Georges Mall and previously known as the ABSA building, Foreshore Place will have 15 floors of commercial space with the ground floor offering banking facilities, coffee shops, food and other shops. Above this will rise 11 floors of residential units, which runs from the 6th floor to 16th floor, made up of 99 one-bedroom apartments, nine two-bedroom apartments and 63 studio apartments. The fourth floor of Foreshore Place will feature a business and resident’s lounge and entertainment terrace.

Marketed by Dogon Group Properties, and developed by HBW Group, Foreshore Place will have modern minimalism as its signature look and feel throughout the building – with crisp clean interiors, and calm open spaces.  Designed by KMH Architects, the residential component will feature its own impressive lobby with 24hr concierge security with access control and CCTV, a laundry area, fully installed VOIP, high-speed fibre connectivity, satellite television ports, air-conditioning, parking bays and much more.

The commercial floors will also enjoy their own dedicated lobby with 24 hour concierge security and destination controlled lifts.  All offices will have high-speed fibre connectivity, with other features for commercial tenants including disabled restrooms, modern kitchens and communal areas, parking for vehicles, bicycles, e-bikes and scooters, and storage facilities.

Rob Stefanutto, MD of Dogon Group Developments adds that the one and two bedroom apartments at Foreshore Place will boast 70’s modernist inspired interiors, fitted with Bosch appliances and Hans Grohe bathroom fixtures. The studio apartments will feature Scandinavian-inspired interiors and will be fitted with SMEG appliances and Hans Grohe fixtures in the bathrooms.

“We anticipate high-demand for the apartments within Foreshore Place. The studio apartments in particular meet the modern trend of more affordable inner city micro living – modern apartment with all the luxuries buyers expect, in only 70% of the size. Micro living units have been popular internationally for several years and we are now following this trend in Cape Town. Millennials are looking for location over square meterage, they want to be close to the city centre, able to walk, bike, or rely on public transportation, and with many focused on their careers and social lives younger buyers are rethinking their homes – looking at them as spaces to recharge instead of host.”

“Foreshore Place’s signature hallmark in the Cape Town skyline is its bronze aluminium metal work and bronze tinting glazing. Both of which pay homage to New York modernist architecture,” says Monique Pieterse, Development Manager of HBW Group. “This iconic building was the first structure in Cape Town to use a continuous glass curtain wall and at the time, was the largest steel-skeleton ever used in a skyscraper, defining its 34-storey main tower which opened its doors in 1970.”

Over time, Foreshore Place has seen its fair share of iconic tenants. It was the birthplace of the super nightclub in Cape Town, playing host to the most lavish of New Year’s celebrations. It was also at the forefront of fine-dining being home to the city’s first attempt at a Michelin-starred Bedouin restaurant. Foreshore Place enjoys a prime location alongside Thibault Square – one of Cape Town’s first public squares, and the city’s answer to a typical European city square – with live performances, art displays, coffee shops and cafes.

“Gone are the days of inner city living being a novelty. Foreshore Place is the next step in the exciting evolution of not only this iconic building from the 70’s, but also of Cape Town’s CBD, and harks at things to come in the city centre. Dogon Group are pleased to be able to bring this cutting edge project to market and offer buyers an exceptional and diverse product in a city that is embracing the future,” says Stefanutto.

“We are very excited to be involved in this revitalized icon. Apartments within Foreshore Place offer a wonderful opportunity for those looking for a premier investment opportunity, or those looking to live, work and play in Cape Town’s inner city.  With its central location within walking distance of the CTICC, Artscape theatre, and V&A Waterfront, and convenient public transport access (the MyCiti bus stop is directly opposite, and the railway station is nearby) as well as the surrounding bustling nightlife, restaurants, boutiques, art galleries and more, buyers will be able to experience the best of Cape Town without having to leave the city,” concludes Denise Dogon, CEO of Dogon Properties.

Work on Foreshore Place has already commenced with completion programmed for December 2020. There are 3 show units available for viewing.

This Article Appeared first on Leading Architecture. Click to read.