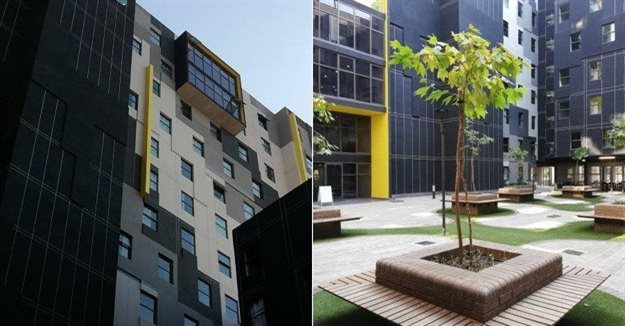 It is always wonderful to see projects we have featured between our Pro Landscaper pages making waves in the news, Here is another take on Hatfield Square. Link to our April issue at the end of this article should you wish to read more for all members of the team.

Hatfield Square mixed-use student accommodation in Pretoria was designed by the Paragon Group for owners and developers Respublica and Redefine. Catering for 2,200 students in a variety of unit types, Respublica Student Living manages the development. It extends over 51,000m2 (excluding basement levels), with 3,500m2 of retail space and a mix of restaurants and line shops facing Burnett Street.

Since the completion of Block D, the final phase of the project, there has been a marked revival in the once-rundown area. Paragon Group senior project architectural technologist Antoinette Kloppers believes the success of the project is due to the fact that the entire precinct was designed with a strong sense of community and pedestrianisation in mind. “We decided to reconfigure the area entirely, creating a multifunctional space where students could live and play in a vibrant village-like setting,” Kloppers explains.

The project was completed in three phases. Blocks A and B are located closest to Hatfield Square, followed by Blocks C and D; the latter being the tallest building in the precinct, and completed last. In order to enhance the sense of micro-communities, the four blocks were colour-coded, with each building’s unique colour repeating throughout its floor plates as well as on its façades.

With accessibility as the key driver, pedestrian walkways were introduced on either side of Block D, seamlessly connecting Hatfield Plaza and the Hatfield Gautrain Station. These thoroughfares feature both stairs and ramps, and are therefore also wheelchair-friendly. “With Block D completed, we are thrilled that the entire precinct is alive with hustle and bustle,” Kloppers comments.

“We shaped the space to cater for both students and the general public, encouraging flow and interaction,” Kloppers highlights. For example, the line shops are consciously leased to tenants addressing student-specific needs, but also house a few restaurants. This mix has resulted in an extremely inviting and welcoming frontage,” Kloppers comments.

In order to optimise the construction process and reduce the total cost, autoclaved aerated concrete (AAC) blocks were used as the main building material. These are lightweight with improved thermal qualities and fire resistance. As a result, all of the internal walls are 110mm – as opposed to traditional 230mm brick walls – reducing structural loads while offering economic sensibility. “The AAC blocks are quite large, easy to handle and fast to construct,” Kloppers points out.

However, due to the porosity of the AAC blocks, a normal plaster-and-paint finish could not be applied. Therefore an exterior insulation finishing system (EIFS) from Terraco was used. This trowel-on finish is applied to the meshed and primed AAC blocks. Where possible, tape joints on the façade align with the internal shear walls, cleverly lending further verticality to the facades.

Texturality in colour and relief

“We wanted texturality both in colour and relief on the buildings themselves,” Kloppers adds. The latter was achieved by adding colour-coded fins to the facades where the windows are close together, simultaneously acting as fire breaks. In other instances, extruded polystyrene blocks were fixed mechanically to the façade for added relief on the mainly monochrome exterior.

A concrete feature staircase was designed and cast on-site, posing a challenge for the contractor in coordinating the in-fill of the formwork, the Paragon Group’s Ricardo Andrade reports. The internal shear-wall grid is 5.6m in order to maximise flexibility in accommodating the variety of modular units in a ‘plug-and-play’ design.

Communal eating and cooking areas are centrally located, and different levels are interlinked with novelties such as slides and hammocks. A variety of strategically placed common lounges and study spaces encourage cross-pollination throughout the entire development.

The courtyard spaces act as spill-out areas where students can relax, study, or socialise. Each courtyard has a distinct identity, ranging from a reflective and tranquil area to a braai area and a basketball court and swimming pool. In addition, various rooftop spaces were created to include niceties such as a laundry and a gym with a running track.

Herself a student back when Hatfield Square was the student social hub, Kloppers is proud to be associated with this project, which she says is close to her heart. She is equally excited at how it has rejuvenated the urban fabric in the area after the recent social decline of the square.