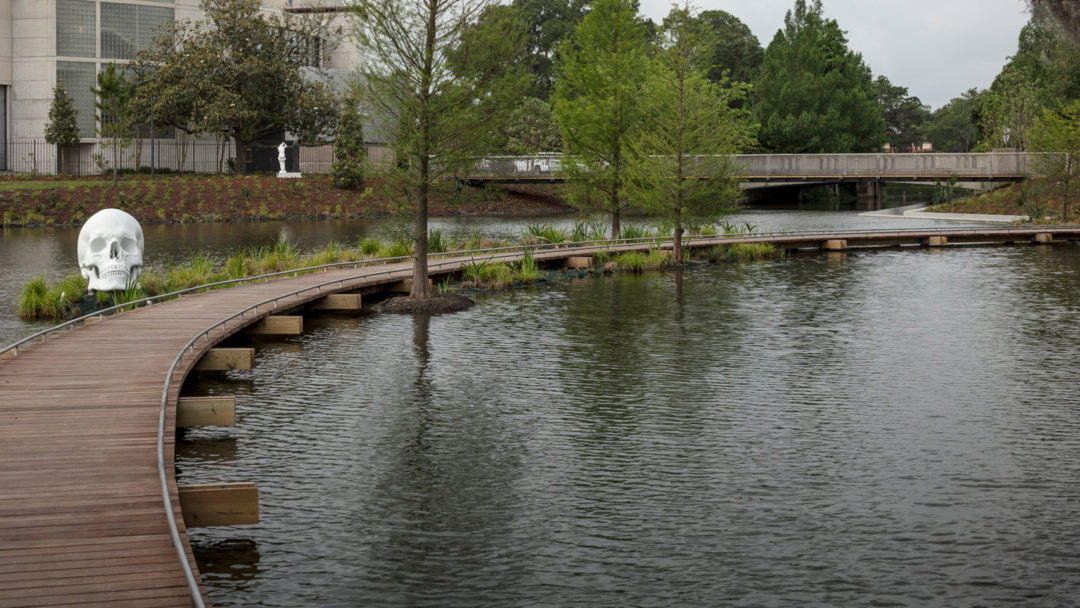 Landscape architecture firm Reed Hilderbrand has cut a pathway through water as part of its extension to the sculpture garden at the New Orleans Museum of Modern Art.

American practice Reed Hilderbrand created the 280-foot-long (85-metre-long) pathway to run underneath an existing bridge that crossed the existing site and the site of the new addition. It is billed as the first canal-link of its kind in the US.

The lagoon water rises up to the top of the walkway’s balustrade, a detail NOMA director Susan Taylor likens to the larger levee systems in the city that hold back the Mississippi River.

“It creates this engagement with water that’s really immediate and visceral but also reflective of the larger microcosms of New Orleans, the levee systems,” Taylor told Dezeen. “When you’re looking over a bridge down on the levees you’ll see there’s this incredible wall that holds out the water.”Related storyFoster reveals botanic sculpture garden for Florida’s Norton Museum of Art

Water forms a key feature of the sculpture garden’s extension, which wraps a lagoon reshaped and cleared of the mud that had accumulated in the lagoon over the years. A weir cuts through the water to allow for changes in levels as a way to address the potential of flooding.

The new garden is formed of three curvilinear parcels of land arranged around the water. The canal-link dog-legs at the end to lead to the first, while the other two are joined by bridges. One of the these was created by artist Elyn Zimmerman and is among the 26 new sculptures in the park.

The others – including designs by American-Canadian architect Frank Gehry, Mexican sculptor Pedro Reyes and Irish painter Sean Scully –  are arranged to complement the surroundings.

“There are different factors that we dealt with design and with sighting,” said Taylor. “Some of the pieces we had early on so we could build the site around their placement and then other pieces had a place, and they could be interpreted as a response to the landscape.”

“There was also a coordination and thinking always between landscape and sculpture,” she added. “It was never that a piece of work got plopped down in the landscape and that was it.”

Elements of the landscape that had deteriorated after suffering damage during Hurricane Katrina, which hit the city in 2005, were restored during the project. The team also made measures to protect it against future damage, such as adding in bioswales to prevent run-off from the street.

As part of the project, local firm Lee Ledbetter & Associates added a 5,000-square-foot (465-square-metre) indoor sculpture pavilion to offer a taste of the exhibitions in the larger museum, and a space for changing installations in the garden.

The elliptical structure features an open space with 18-foot-high (5.5 metres) ceilings to host large-scale designs. Skylights are placed around the perimeter of the building to bring in natural light.

Other additions in the sculpture garden include a stepped grassy mound that provides outdoor seating for public performances on a backlit stage that extends over the lagoon. There is also an outdoor education space.

The sculpture garden was first created in 2003 to accompany NOMA, a fine arts museum established in 1911. In total, the garden displays work by 85 artists that were donated to NOMA by the Sydney and Walda Besthoff Foundation, and remains free and open to the public.

“It’s always been conceived as a gift to the city of New Orleans,” said Taylor.

Completed earlier this year, the extension forms part of a wave of new projects in the city, which is experiencing a renaissance in the aftermath of the hurricane. Others include a host of boutique accommodation, such as Hotel Peter & Paul and an outpost of the Ace Hotel.

Photography is by Richard Sexton

This story was was first seen on Dezeen. For more visit www.dezeen.com