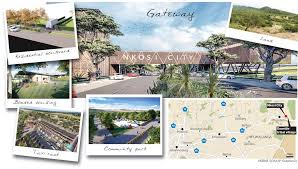 After 10 years of planning and dreaming, three men are close to achieving their goal – an ‘agri-city’ for the future in Mpumalanga.

Nearly a decade ago, property developer Philip Kleijnhans, traditional leader Sicelo Nkosi and then ward councillor in the city of Mbombela, Mpumalanga, Mandla Msibi, stood on a bushy piece of land – a picture of a future city unfolding in their minds.

The communal land bordering the Daantjie tribal village, about 35km from Mbombela and 3km from the Kruger National Park, remains as bushy as it was then, and livestock still graze there.

However, one thing is different.

The trio’s dream is now a concrete plan on paper and most signatures have been appended, with the development of the R7.8 billion project set to start next year.

As such, by early February, a new “agri-city” called Nkosi City – the one these men were visualising back then – will start being built.

This is going to be a game-changer that will see the wealthy and the poor living as neighbours. The rural Daantjie community will have equal shareholding through the Nkosi City Communal Property Association with Dovetail Properties.

Kleijnhans, the director of Dovetail Properties and the man who has been spearheading the plans for the multibillion-rand city, told City Press this week that all the important boxes had been ticked:

Nkosi City’s layout map occupies a prominent space on the wall of Kleijnhans’ office in Johannesburg.

On his desk lies a 225-page document titled Nkosi City, An Agri-City.

This document contains all the details – from the layout of the city (water reticulation and electricity) and artist impressions to agri-city precedents (examples of similar buildings elsewhere) and other details.

It shows that the whole plan is now ready for implementation.

“In January, it will be exactly 10 years since I stood on site with the chief and Mandla [who is now Mpumalanga’s co-operative and traditional affairs MEC],” Kleijnhans said.

He added that the project would be completed by 2026. But what kind of city is this?

It will also include amenities such as a 50 000m2 shopping mall, a private clinic, schools and an iCollege, and a private further education and training college.

Right now, Daantjie is a haphazard former homeland settlement built in KaNgwane. It is a mishmash of modest and posh houses interspersed with small businesses.

Pot-holed roads and an erratic water supply tell a story of deteriorating service delivery. The residents travel to Mbombela for shopping and services.

This was taken from City Press @ News 24. Click here for the original article