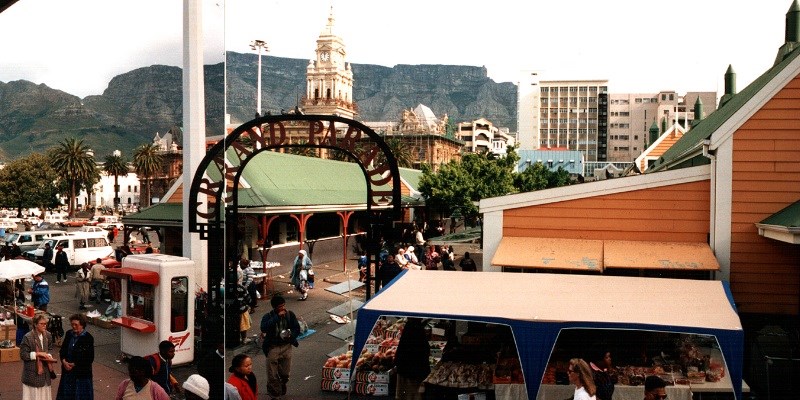 The upgrade of the Grand Parade Kiosks has firmly laid the cornerstone for the Grand Tourism Triangle. Read more below:

It was an ideal opportunity for the Mayor and MAYCO Members to inspect the refurbished area. Additionally, they were able to meet and greet the kiosk traders to establish what the feeling was about the revamped kiosks.

‘The upgrade of the kiosk area means that this popular space in the heart of the CBD can be preserved for the enjoyment and safety of many locals and tourists. The upgrade has also allowed for additional safety, as there is now a dedicated area for law enforcement agencies to have a permanent and significant presence at the Grand Parade. During my engagement with the traders, we received much positive feedback about the improved public space and their trading spaces,’ said Executive Mayor Dan Plato.

Although not fully complete, with the upgrade of the existing ablution facilities still underway, Mayor Plato and his team had the opportunity to visit the newly constructed first floor CCTV operations room and Law Enforcement command center, which will facilitate direct precinct policing and enhanced visible security in this space. This should give visitors to the area a sense of comfort from a safety perspective.

Alderman James Vos, the Mayoral Committee Member for Economic Opportunities and Asset Management, expressed his delight. ‘The City has delivered a fantastic upgrade to the trader precinct which establishes the cornerstone of our Tourism Triangle vision. I would like to thank all of those involved in making this project a reality, and more especially thank the Grand Parade kiosk traders for their patience and cooperation during the refurbishment period.’

‘The revamped Grand Parade kiosks, together with the planned upgrade of the broader trading space on the Parade, will enable trading to take place in a more dignified manner.  The City of Cape Town recognises the significance of the informal economy and its contribution to the Gross Value Add. It also helps with the creation of employment opportunities that in turn contribute to the household income,’ said Mayoral Committee Member for Urban Management, Alderman Grant Twigg.

The Grand Parade Kiosk trader engagement, held in November 2018, where the upgrade plans were unpacked, was one of the first projects visited and championed by Alderman Vos.

‘This is the first step in reinstating the Grand Parade as a destination and it will be worth the disruption. This historic trading and hospitality venue is the cornerstone of the tourism triangle.

I am confident that its proximity to the Castle of Good Hope and the planned Tourism Visitor Centre at the iconic City Hall will make this a popular spot on everyone’s list of favourite places to visit in Cape Town,’ added Alderman Vos.

The more than R5 million upgrade being undertaken by the City of Cape Town will ensure this iconic public space becomes a hive of activity for locals and visitors to the city.

‘The realignment of the trading spaces will feature new trading opportunities that will provide a greater variety of offerings to discerning shoppers. Opening up this public space will allow us to attract visitors and Capetonians to sample the local fare on offer all year round and not only on event days, providing economic support to some of the city’s most vulnerable residents,’ said Alderman Twigg.