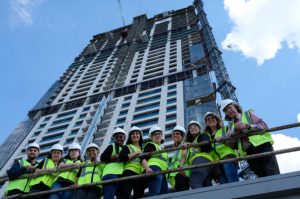 It’s 7am in Sandton on a crisp winter morning. The towering construction site on Maude Street, just a stone’s throw away from the JSE in the heart of the CBD, is already alive with activity. Somewhere within The Leonardo’s beehive of more than 2 000 construction workers are several women who’ve managed, crafted and overseen the creation of this 55-storey skyscraper; the highest building in Africa.

As part of Co-Arc International Architects’ predominantly female-led team, Director Catharine Atkins and professional architect Malika Walele are familiar faces on the multibillion-rand construction site. Atkins heads Co-Arc’s team on the project, responsible as Principal Co-ordinator for all engineering and architectural disciplines. She oversees the entire construction documentation team. She is supported by Walele, Salome Daley, Janel Venter, Megan Holman, Angela Barnard, Keitsitse Losaba, Antonella Giuricich, Rachel Zwane and Mitchell Gibbon. The building itself was penned by Co-Arc’s emeritus partner, Francois Pienaar, but when it came to selecting the best team to execute the technical detailing, Co-Arc set up a highly skilled team on merit. The fact that women made up the majority of this team went unnoticed in the studio until a photo of the team was taken on site, quite late in the project. Atkins credits the conducive working environment at Co-Arc for creating a level playing field for all employees.

While Walele has been on site each day, operating as the vital link between the construction outfits and the Co-Arc brainstrust, each woman on the team has contributed her technical and professional skills to the mixed-use project. Ultimately, The Leonardo will boast luxury residential apartments and penthouses, office and shopping space, restaurants and lifestyle recreation areas, and fundamentally alter the skyline of the city.

But, unlike their male counterparts on similar projects, these female architects face trials over and above those related to the dynamic world of construction; their gender remains a daily challenge.

The South African Institute of Architects in the Eastern Cape calculates that just 21% of South Africa’s registered architectural professionals are women, compared with about 31% in Europe (2010: Architect’s Council of Europe) and 20% in the United States (2004: AIA National Associates Committee Report). These relatively low numbers ensure that those already in the field battle to make themselves heard.

Atkins, a founding partner of Co-Arc in 2005 with 23 years of experience under her belt, says Co-Arc is well aware of the issues facing young women at the coalface of the profession and, together with her partners, she has actively sought to promote the careers of outstanding women. Co-Arc knows full well that site work is essential for career advancement; and yet young female architects battle harassment when dealing with construction teams.

For the past two-and-a-half years, Walele (27) has worked at The Leonardo, one of the biggest construction sites in Africa. She deals with some 2 000 men and a minority of women, almost all of whom do not operate at management level. Despite the support of on-site management, on occasion she’s had to stare down groups of men making inappropriate comments, turn down unwanted advances and shrug off sexism.

“I’ve had to find mechanisms to deal with it, by saying something or even just ignoring it,” says Walele. “It can get to you and affect your work at times if you don’t deal with it.  Being assertive and dealing with these incidents is crucial for women, as this behaviour is typical of all construction sites all around the world.”

Despite the challenges, neither woman would give up the opportunity for the career-advancing experience one gains on a major project like The Leonardo.

“I love being on site, and the growth trajectory is huge; so much more than being in an office,” says Walele. “I’d encourage any woman to do this. Unfortunately many women architects don’t believe they can, because it is so male dominated.”

Co-Arc International Architects is presently engaged in designing and overseeing the construction of The Leonardo tower in Sandton.

Ironically, in their experience, the more male colleagues are exposed to working with professional, competent women, the more mindsets change. In the past 30 months Walele has seen a notable shift in attitude from the foremen and managers on site who’ve often witnessed inappropriate behaviour towards her first hand. “It has opened their eyes and made them more sensitive and appreciative of the challenges women face, and may have a positive impact on the treatment of women on sites in future,” says Walele. “Once men become aware, it is easier to deal with incidents, and to confront someone if you need to.” While both women command immense respect, it has taken some time to get that message across.

Atkins, who has mentored Walele since she joined the Co-Arc team in 2016 as a candidate architect, understands the depth of the fight ahead. The only woman among three male partners, Atkins admits it takes a lot more for her to make an impact outside the office than her male counterparts. “Yes, over the years you move your way up and you make yourself heard, and you secure the right to lead, but it’s a constant push,” she says.

Recalling her words to Walele when she began working on site, Atkins recollects how she told the young architect to become harder: “Malika is petite, so she had to ensure that none of the guys thought they could walk all over her, but the partners believed she had what it takes to succeed.”

These words proved prophetic for Walele, who admits to having toughened up in a matter of months. “I didn’t have time to play around and find my feet,” she recalls, adding that Atkins’s perspective and understanding proved invaluable. Certainly, Co-Arc’s bias to the intellectual rigour, technical skill, passion and resilience of people, rather than gender or race, has created an environment where women can flourish.

Unfortunately, says Atkins, discrimination is a constant theme for women in architecture; even during their time at university. “Back when I was studying it was a male-dominated world and there weren’t a lot of women around, so you had to speak up for yourself. This means that if you don’t have the right personality you might fade away and not be taken seriously.”

But, as the Co-Arc team and women like Atkins and Walele build impressive resumes across the African continent, it becomes harder to side line their achievements. As a result, their own confidence is growing.

It is for this reason that Co-Arc’s predominantly all-female team sends such a strong message, says Atkins. “This is highly unusual,” she admits. “Fortunately I’ve worked with our client, The Legacy Group, since I started at Co-Arc, so my relationship with them has grown over 15 years.” She had to earn their respect, but now they rely heavily on her and demanded she was part of the team for The Leonardo project.

Ultimately, Atkins’ team has managed a slick operation and carved out a piece of South African architectural history in the process. “It’s hugely rewarding,” she admits, adding that over and above their professional expertise women bring stability and communication, and a notable level of detailing to any architectural project.

For Walele, the Co-Arc team “is proof that women can change cities and create buildings that will be the tallest in Africa”. She adds: “I’ve never understood why architecture needs to be a male-dominated industry. Women are more than capable of doing this; it’s frustrating that more women in the industry aren’t doing it.”

This article is taken from Leading Architecture www.leadingarchitecture.co.za