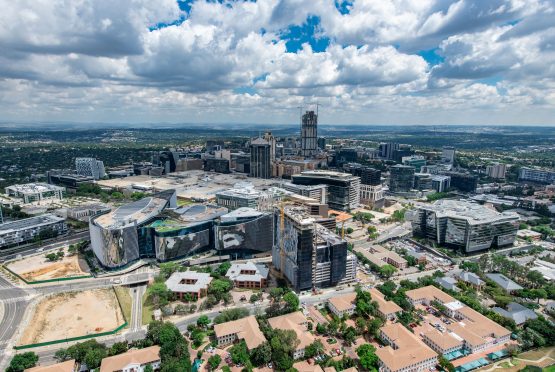 The planned precinct is already home to the new headquarters of (from left) Discovery, Bidvest Bank and Sasol. Image: Supplied.

This is revealed in extensive planning documents about the Sandton Summit Precinct Plan, which the City of Joburg has now put out for public comment.

If approved in its current form, the plan could see almost a million square metres of mixed-use property space being developed over the next 10 to 15 years on land earmarked for the Sandton Summit precinct. This would see the south eastern side of Sandton at the upper end of Rivonia Road and Katherine Street being transformed into a new neighbourhood that will include office, residential, hotel, retail and public open spaces.

Moneyweb understands that Growthpoint, which owns most of the applicable land, has been working on the plan for a few years. While the actual Sandton Summit precinct is yet to be launched, more than R6 billion has already been invested in the area with the development of the new Discovery, Sasol and Bidvest Bank headquarters.

An artist’s impression of part of the planned Sandton Summit precinct around the Discovery head office. Image: Supplied

“These are very exciting plans, with Sandton Summit having the support of the city and other developers and land owners within precinct,” says Estienne de Klerk, CEO of Growthpoint Properties SA, speaking to Moneyweb in the group’s first public comment on the project.

“The Sandton Summit Precinct Plan itself is a longer-term project and the process with the city is underway to unlock the value of the land,” he adds. “However, it is important to note that around 20% of the planned precinct has already been developed with the opening of Sasol, Discovery and more recently Bidvest Bank’s landmark new office buildings.”

The Edge, with the headquarters of Discovery and Bidvest Bank as neighbours, is one of several new developments planned for the precinct. Image: Moneyweb

De Klerk says the precinct represents the “new Sandton” at the upper end of the area near the Gautrain station, which has seen significant development in recent years.

Read: Cape Town releases forensic reports into its sale of land to Growthpoint

Growthpoint would not be drawn into commenting on the expected development value of the overall project. However, considering that completed buildings in the node have already seen more than R6 billion in development, Sandton Summit is likely to see more than R20 billion in new investment over the next 10 to 15 years.

The property giant is already punting two new developments within the precinct on its website – The Edge, a 10-floor, 21 000m2 office tower, and Empire Crossing, a 22 000m2 office block. Both developments are adjacent to the 112 000m2 Discovery building, which Growthpoint developed and jointly owns with private property company Zenprop.

However, one of the biggest developments on the cards and shown in the planning documents is a 139 000m2 mixed-use office, hotel and retail complex called The Summit. Property insiders say Growthpoint is in talks with French-based international hotel group Accor to open its Novotel and Ibis brands within this development.

Speaking to Moneyweb, Sandton Central city improvement district manager Elaine Jack describes the Sandton Summit plan is a major development that is set to further change the skyline and streetscapes of Sandton. “The precinct will expand the size of the Sandton CBD, but also take it to another level as a live, work and play environment,” she says. “There is no doubt that Sandton Summit will see huge investment by Growthpoint and other property players over the next few years.”

Jack notes that the project has been in the works for a while and is in line with the city’s Spatial Development Plan (SDP) for Sandton.

“One of the key elements of the Sandton SDP is to increase densities here, which includes bringing more residential and other mixed-use property developments into Sandton. This will turn Sandton into a more vibrant and pedestrian-friendly CBD,” she says.

“We are especially happy that it will be a well-rounded and inclusive area that will include a huge park and recreation spaces.”

Rudolf Pienaar, Growthpoint’s chief development and investment officer, tells Moneyweb that while the Sandton Summit plan is yet to be officially launched by the group, it has significant momentum and support.

“A big positive is that we already have three major corporates – Sasol, Discovery and Bidvest Bank – committed to the precinct,” he says. “In addition, we are getting support from the city and other property owners in the area such as Alchemy Properties.

“If approved in its entirety, the precinct will have just under a million square metres of development bulk when fully developed.”

“Growthpoint does not own all the land,” he adds. “While we will initially own a significant portion with around 600 000m2 of potential development bulk, this will be sold to other property investors and companies over time.

“We conceptualised the Sandton Summit Precinct together with studioMAS Architecture and Urban Design. Essentially it will be a new mixed-use neighbourhood including office, residential, hotel, retail and recreational spaces,” says Pienaar.

“Sandton Summit will be a safe and managed urban environment that will have smart city and green building technologies as part of its rollout.”

Asked how long the precinct is expected to take to be developed and the overall investment value, Pienaar notes: “This is difficult to say right now. In a normal economic environment with good GDP growth, a development like this could take eight to 10 years. But we are currently in quite a depressed economy and property market.

“Growthpoint is committed to our Sandton Summit plans, but developments here will be based on market demand. We will not be taking risk and developing anything here on spec right now.”

This Article was first Published on Moneyweb. For the original article, please click here