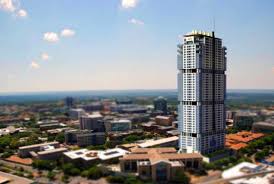 Africa’s tallest building is set to open next month as its developers seek to cash in on security fears and traffic jams by building a high-rise residential and retail complex in the heart of Johannesburg’s financial district.

The Leonardo is a 234-metre skyscraper within walking distance of the Johannesburg Stock Exchange, the headquarters of some of Africa’s biggest companies and Sandton City, a premier shopping mall. Developed by South Africa’s Legacy Group and Nedbank, it will house 254 apartments, a three-floor penthouse and five floors of office space as well as shops and restaurants.

While Johannesburg’s run-down city centre is notorious for its high crime rate, the relatively safe suburb of Sandton has undergone massive change in recent years to become a showcase for ultramodern high-rises and glass-fronted office structures.

Still, with in-house restaurants, a Montessori pre-school and room service, the Leonardo is likely to be more luxurious than most residential buildings in Sandton.

“These things tend to be islands in quite a big market so they tend to be successful,” said Peet Strauss, Johannesburg developments sales manager at Pam Golding Properties, South Africa’s biggest real-estate agent.

“At the top end, we are dependent on purchases from north of our border – buyers from elsewhere in Africa who have children in university” for instance, he said.

The three-billion rand building is the latest development by Legacy, which operates 23 hotels and luxury residential complexes across Africa. Its properties range from the Michelangelo Hotel in Sandton to Hotel Le Cristal in Gabon and Labadi Beach Hotel in Ghana.

Adrian Landry, general manager of the Leonardo, declined to give a price for an apartment or to disclose how many have been sold. At the nearby Embassy Towers, a 12-floor development, two-bedroom apartments start at R7.2m.

Landry did say that the penthouse, which will be custom-designed by the eventual owner and have space for six bedrooms, has attracted interest from both local and West African buyers.

On a clear day, it’s possible to see airplanes taking off from O.R. Tambo International Airport 30 kilometers away, as well as the Magaliesberg mountain range.

Over half of the apartments are available on a buy-to-rent basis, with the building also serving as a hotel with one-bedroom apartments costing R7,250 a night or R54,000 a month – more than 15 times the average monthly wage of a low-skilled worker.

Designed by Johannesburg’s Co-Arc International Architects, the Leonardo supersedes the Carlton Centre as the tallest building on the continent. The 222-meter Carlton Centre in the city center opened in 1972 as a hotel owned by Anglo American Plc and now serves as the headquarters of the state port and rail company.

This Story first appeared on Finance 24, For the original click here