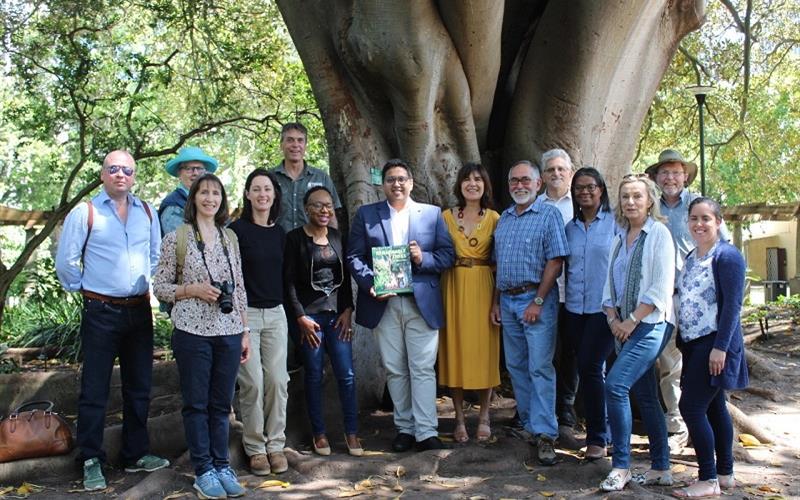 One of the largest trees in the Company’s Garden has officially been recognised as a Champion Tree by the National Department of Environment, Forestry and Fisheries. Towering at almost 27 meters, the majestic Ficus Elastica, or Rubber Tree, has a crown diameter of 38.4 metres and stands guard at the northern entrance to Cape Town’s oldest garden.

The National Department of Environment, Forestry and Fisheries recently made the announcement  after an amendment to the National Forests Act, 1998 was gazetted.

The Champion Tree Project started in 2003 and is a national initiative that identifies, protects and promotes exceptionally big and impressive trees in South Africa.

More than 90 trees have been identified thus far and the Ficus Elastica in the Company’s Garden stood out based on its size index and historical location.

Ficus Elastica is part of the Fig genus species, which is native to north-east India and southern Indonesia and forms part of the Banyan group of figs.

‘The City’s Recreation and Parks Department is delighted about the accolade. It is only through recognition, education and awareness that we will be better prepared to care for our trees which plays such an important role in our built environment. The recognition and acknowledgement means a lot as Champion Trees are now enjoying protected status,’ said the City’s Mayoral Committee Member for Community Services and Health, Councillor Zahid Badroodien.

The significance of the recognition of Champion Trees is that it has protected status under the National Forests Act, 1998 (ACT NO. 84 OF 1998), as amended. In terms of the Act, ‘no person may cut, disturb, damage or destroy any protected tree or possess, collect, remove, transport, export, purchase, sell, donate or in any other manner acquire or dispose of any protected tree or any forest product derived from a protected tree, except under a licence granted by the Minister or in terms of an exemption from the provisions’.

Contravention of the Act is seen as an offence that may result in a fine or imprisonment for a period up to three years.

The Champion Tree that towers over the entrance of the Company’s Garden is not only aesthetically pleasing, but also provides ample shade for people to relax under during hot summer days.

‘Trees carry a lot of history and the ones in the Company’s Garden are a unique variety that form part of Africa’s forest and tree heritage. Trees with such significance should get the care they deserve as it also plays an important role in the eco system and educating future generations in showing respect for nature. I cannot imagine a city without trees – let us share the responsibility to protect these treasures,’ said Councillor Badroodien.

Six of the Champion Trees recognised in the Western Cape are located at another highly popular City Park – the Arderne Gardens in Claremont.