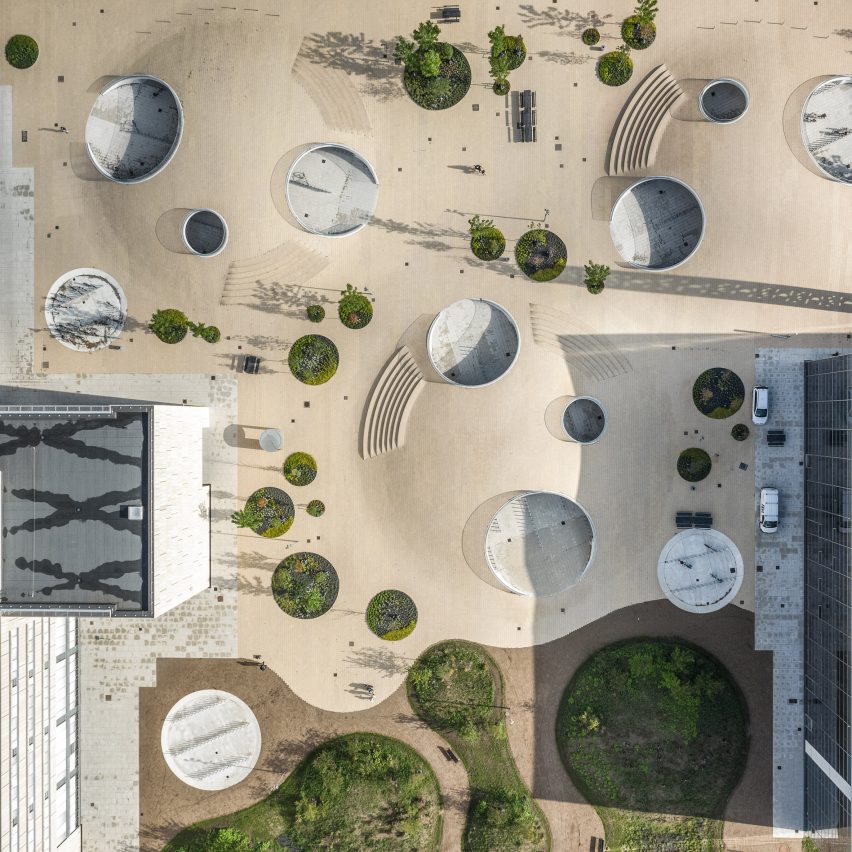 Karen Blixens Plads in Copenhagen is an undulating plaza with sheltered parking for over 2,000 bicycles designed by Danish architecture firm COBE.

The 20,000-square-metre public park is situated between the University of Copenhagen and Amager Common, an area of wetlands, fields and lakes just outside of the city.

Named for noted 19th-century Danish author Karen Blixen, the square is one of the largest in the city.

The domed structures are cast concrete shells, clad with hand-laid tiles in neutral colours that match the exteriors of the surrounding buildings.

Mimicking the surrounding undulating terrain, these hollow concrete hills break up the the square and provide shelters for bicycle parking.

In total Karen Blixens Plads provides parking for more than 2,000 bicycles for the university’s students and staff.

Alongside Amsterdam, the Danish capital is considered one of the most bike-friendly cities in the world, with more than 40 per cent of its population commuting to work on bicycles.

“Copenhagen is one of the world’s leading bicycle cities. That requires a new and flexible approach to bicycle parking,” explained Dan Stubbergaard, architect and founder of COBE.Related storyWorld’s largest bicycle park built below Utrecht train station

“In previous projects we have developed innovative bicycle parking solutions that form a natural element in the environment. By Nørreport Station, for example, we created the so called bicycle beds,” he added.

“Here, at Karen Blixen Plads, the solution is bicycle hills.”

Steps cut into the sides of the larger hummocks allow the space to double as an outdoor auditorium, which can be used for concerts, performances and public events with capacity for up to 1,000 people.

“The almost cathedral-like form of the bicycle hills further offers an aesthetic experience in its own right, both when people park their bikes and when they meet at the hills for lectures, group work, concerts or Friday afternoon socialising,” said Stubbergaard.

As well as providing a facility for sustainable transport, Karen Blixens Plad has planted beds to encourage biodiversity.

These areas of planting help rainwater to evaporate and, in case of heavy rainfall, supplements the nearby canal. This ability to handle stormwater should mean the square can manage in a changing climate.

The project was supported by the private foundation A.P Møller Fonden, which was established by Danish businessman Arnold Peter Møller, the founder of the A.P. Moller-Maersk Group.

COBE is an architectural firm founded in 2006 by architect Dan Stubbergaard. The studio has also designed a high school in an abandoned factory and the extension to Danish Red Cross headquarters.

Currently the largest underground bicycle park in the world is in Utrecht in the Netherlands. Ector Hoogstad Architecten built a three-storey bike park under the train station with room for 12,656 bicycles.

Photography is by Rasmus Hjortshøj.