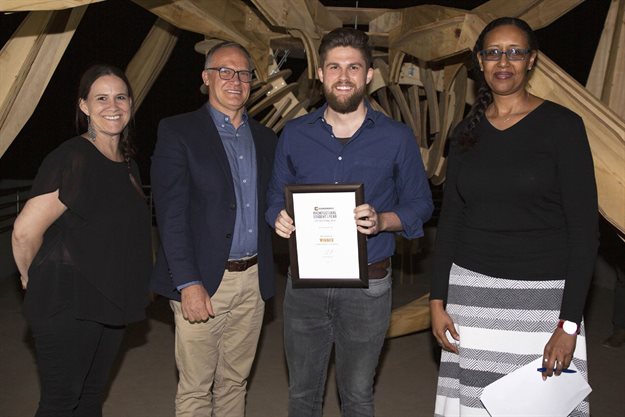 De Jager Booysen from the Tshwane University of Technology has been named a winner of the Corobrik Regional Architecture Awards. Booysen receives R10,000 in prize-money. Laetitia Lambrecht and Aldon Plaatjie share the runner up place and will each receive R7,000 for their award. A further R6,000 was awarded to Tiisetso Nkoana for his innovative use of clay masonry in the building design.

Commenting on the Corobrik Architectural Student of the Year Award, Musa Shangase, Corobrik commercial director said: “As an organisation, we believe that ‘better starts here’, and this is particularly true for this award. These up-and-coming young architects are already designing iconic structures that would imprint their legacy on the country’s built environment. It is truly an honour to witness history being made.”

De Jager Booysen is one of eight young architects from top South African universities receiving a Corobrik Regional Architecture Award in recognition of their design talent and innovation throughout 2019. In addition to the cash prize, the regional competition winners are through to the finals of the National Architectural Student of the Year Award – set to be announced in Johannesburg on 6 May 2020 – which comes with R70,000 in prize-money.

On his dissertation, Centre of Healing, Booysen says, “According to research, over 70% of the African population in South Africa relies on traditional healing methods as their preferred choice of medicine. Despite this, Western medicine is almost universally recognised as the only ‘official’ treatment method in South Africa. For this reason, research on traditional healing methods has been largely neglected. This provides a unique opportunity for further research and education.”

The dissertation aims to provide a platform for traditional healing to be recognised as an official method of medical practice in South Africa. The proposed development aims to introduce a facility that focuses on three main components: Firstly, the research of rituals and medicines used in traditional healing practice; secondly, the administering of traditional treatment to patients; and thirdly, housing the educational process of becoming a traditional healer.