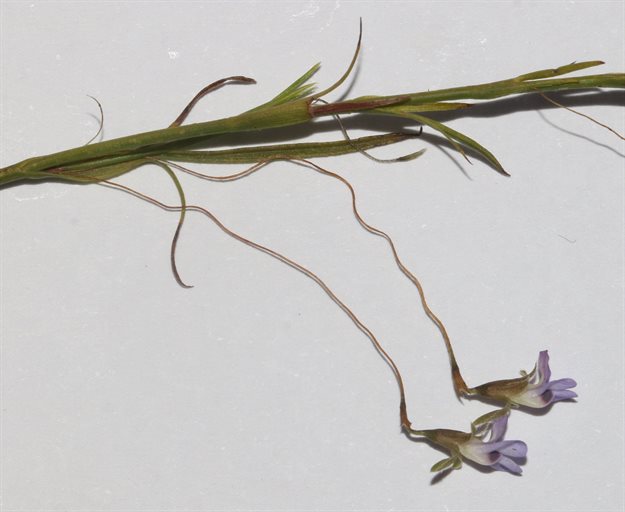 A type of fountain bush from the pea family that used to grow next to mountain streams in the Tulbagh region, which was thought to have gone extinct, has been rediscovered. It was one of the first recorded species to have been lost to forestry and agriculture in the Western Cape in the 1800s

Psoralea cataracta was discovered by Brian du Preez, a PhD student in botany at the University of Cape Town, when he accidently stumbled upon a population on a narrow track close to a river on a farm near Tulbagh.

Until now, P. cataracta was only known from a single specimen collected from “Tulbagh waterfall” in 1804, and in 2008, after many fruitless searches, it was officially declared extinct on the Red Data List of South African Plants.

From previous search efforts as a volunteer with the Custodians of Rare and Endangered Wildflowers (CREW) around the Tulbagh waterfall, he instantly knew what a find this was: “As soon as I saw those delicate thread-like flower stalks, I knew it was Psoralea cataracta.”

Prof Charles Stirton, an internationally recognised specialist on the genus Psoralea based in the United Kingdom, and his co-supervisor, has since confirmed that it is indeed the long lost species rediscovered, last seen in 1804.

“For me the definitive characteristics are the remarkable stipules, very long filiform pedicels, and the unique flower colour. This is a very important find as it shows how the Cape is still relatively unexplored in many mountainous areas. Given that many of the Cape Flora only come up briefly after fires, fading quickly, and that sometimes these fires are irregular, the chances of being in an area at the right time is slim. Well done to Brian for a wonderful find,” he writes in an email from the UK.

Ismail Ebrahim, project manager at CREW, agrees that it is an extraordinary finding: “It is really uncommon to find a properly extinct species, something that hasn’t been seen for ages. And with Cape Flora it is even harder, because most species are restricted to a really small patch and it is easy to miss them if you don’t go off the beaten path.

“It also just shows you the value of proper field botany, like they did it in the old days,” he adds.

Thus far, the 26-year old student is building up quite a reputation for finding long lost species. As a BSc Honours-student in botany at Stellenbosch University (SU) in 2016, he rediscovered two presumed extinct species in the pea family, Polhillia ignota and Aspalathus cordicarpa, last seen in 1928 and the 1950s respectively, and subsequently completed an MSc on Polhillia in 2017, also at SU.

This year he collected a new species of Aspalathus growing on sand dunes on the banks of the Riet River in the Swartruggens Mountains north of Ceres. He is now in a rush to get the species described, as this part of the Riet River is earmarked for orchard expansion.

“We can only conserve what we have described. Only species that have been formally described can receive a Red Data List status, which by law then protect it from development, depending on its conservation status,” he warns.

For this reason, Du Preez has decided to tackle a revision of the genus Indigofera in the Greater Cape Floristic Region (GCFR) for his PhD. This diverse genus comprises over 100 species in the region, with at least 30 new species to be formally described.

He has been covering thousands of kilometres from the Richtersveld through into the Eastern Cape, and everything in between for the past six months, and has already collected over 60 Indigofera species.

For botanists, the period from September to November every year is when most plants are in flower. So sooon he is off on a three-week field trip to the Garden Route and the Eastern Cape.