Indigenous fire methods protect land before and after the Tathra bushfire 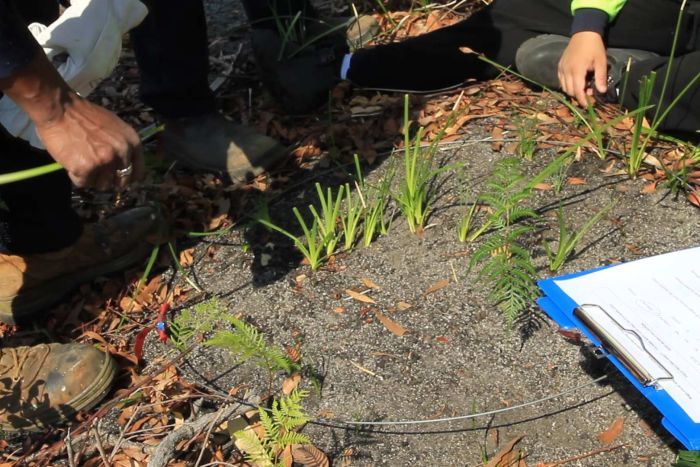 On a hot, dry day in March 2018, 20 separate wildfires ignited across the Bega Valley in New South Wales.

One fire that began at Reedy Swamp north of the town of Bega tore through close to 1,000 hectares before reaching the beachside township of Tathra.

Six months on, a forest of bare, blackened trees frames the town, where more than 100 homes were destroyed or damaged.

But on a small patch of bushland on the south-western edge of Tathra, a patch of green shows where the fire came to a halt.

The land is part of 71 hectares owned by the Bega Local Aboriginal Land Council (LALC) at Tathra West.

The title to the land was transferred in 2016, 17 years after it was granted to the Bega LALC under the Aboriginal Land Rights Act process.

In 2017, the Bega LALC began a cultural burning program as part of the management strategy for their landholdings.

Six months on from the 2018 wildfire, the land where cultural burns were undertaken in 2017 is sprouting with native grasses, in stark contrast to the scorched trees and dense bracken that mark the surrounding landscape.

“The land is their food, their livelihood, their country, their home.

“If they’d allowed wildfires to burn the country to a cinder, they wouldn’t have survived for so many thousands of years.”

Mr Steffensen is a Cape York man who shares his traditional knowledge with Indigenous fire crews around Australia. He first visited the Bega LALC crew in February 2018.

“Helping these young fellas to rebuild their knowledge of their country and applying fire starts to bring out their identity again.

“We’re not just dropping a match, we’re reading country. Fire is a management tool to get the country healthy again, and that opens the door to cultural knowledge.”

“We’re making sure we’re not burning habitat trees and logs [and we’re] keeping the fire cool so we don’t bake all the seeds and nutrients that are in the soil.

“Over time, we’re going to get less leaf litter and bracken, and more grasses and bush foods and medicines come up.”

Burning to heal after wildfire

Four months after the Tathra bushfire, the Bega LALC returned to the burnt out bushland to conduct cultural burns to help promote healthy regrowth.

“The principle of burning these areas so early after a fire is to try to create a bit more diversity of plants coming back,” said Dan Morgan, an Aboriginal community support officer with Local Land Services.

“When the soil is disturbed through hot fires or land clearing, you get invasive natives like bracken coming back that choke out the area.

“Where we’ve burnt after the fire, we’re seeing less bracken and more native grasses, little herbs and shrubs coming through.”

As part of their ongoing land management, the LALC crew conduct flora and fauna surveys to evaluate biodiversity outcomes from the cultural burns.

“From the test burns that we’ve done in these areas, we’re documenting what has grown back that we didn’t see beforehand,” said cultural burn crew member Bronwyn Luff.

“It’s nice to see the regrowth of new seedlings.

“A lot of my friends I grew up with live around Tathra. I just feel really good that we have done this work, it makes us feel like we’re helping our surrounding community.”

“Whether it’s wildfire or conventional hazard reduction burns, we’ve got this repeating cycle of hot fires and plants coming back that like really hot fires, leading to extreme fuel loads building up again.”

When the program began, the RFS delivered basic fire training and conducted the first burns with support from the Bega LALC crew.

Now, the Bega LALC crew do their own preparation and burning on country without RFS support.

“But there’s a lot of knowledge here that we need to be looking at. It’s a win for the community, getting that fuel reduction work done, as well as bringing life back to the land.”

“The current funding we have allows for about 15 days of field work, which includes preparation as well as burning,” said Glenn Willcox, CEO of the Bega LALC.

“We’re looking to secure long-term funding to allow us to do more planning and give the crew members more certainty about our ability to keep doing this work.

“We have evidence that the work that we did in Tathra last year had a significant impact on the effect of the wildfire in March.

“If we can keep doing this work on the Bega Land Council land that forms the interface with townships in Merimbula, Tura Beach, Mirador, as well as Tathra, we can reduce the risk of a repeat of what happened in Tathra in 2018.”

“What Indigenous fire represents is thousands of years of getting to know the landscape,” Mr Steffensen said.

“When we look at the damage caused by bushfires, tens of billions of dollars of damage, why can’t we put good money into looking after the land, and evolving this culture to be closer to the landscape in the future?”

“It’s sort of a calming feeling. It’s our cultural obligation to do these sorts of things, has been for thousands of years.”