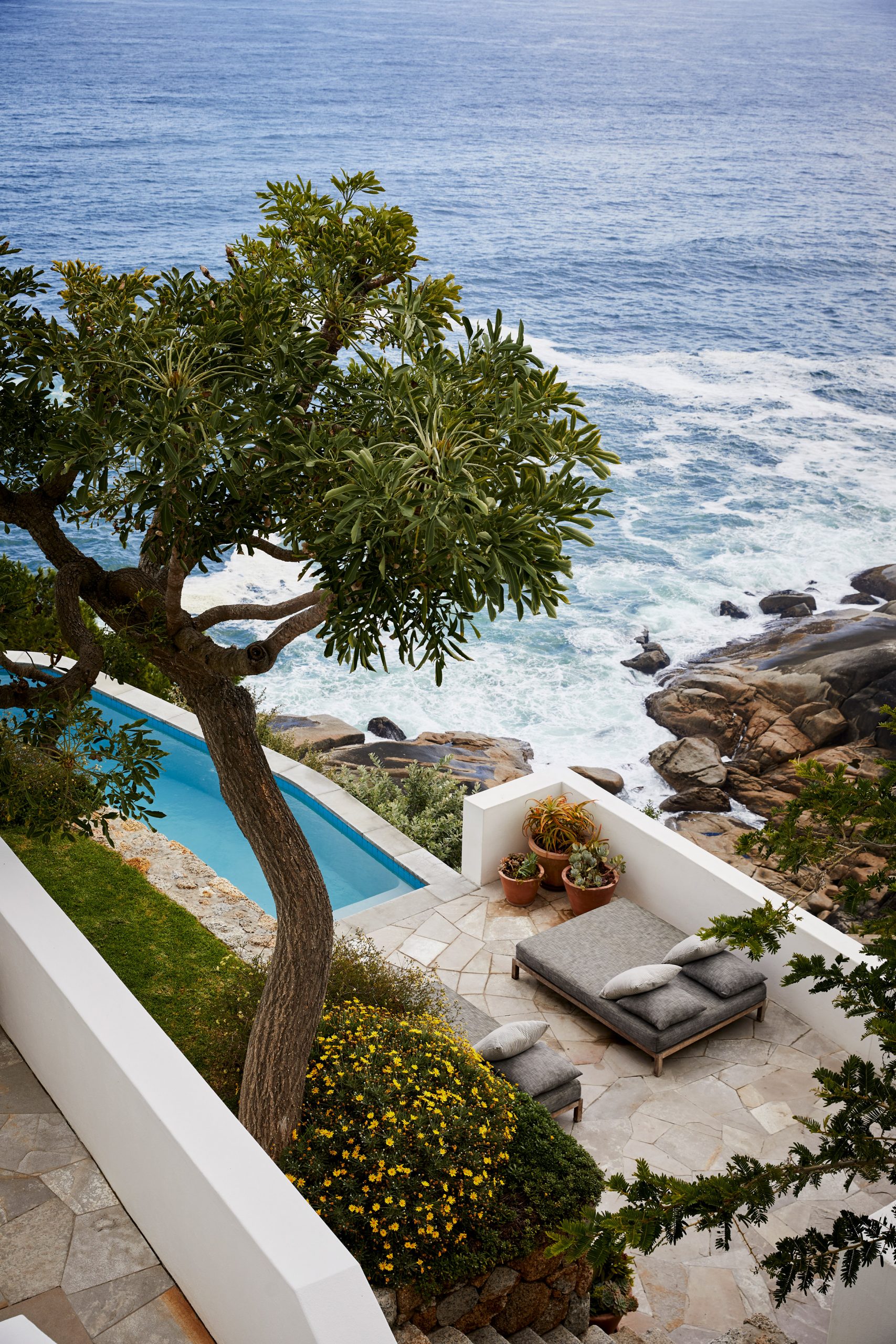 South African practice Antonio Zaninovic Architecture Studio has overhauled a 1960s house in Cape Town with designer Tara Bean, adding outdoor areas to make the most of its ocean views.

The four-storey Icaria House serves as a holiday home and rental unit for Kearnon O’Molony, a South African who grew up in the city and now lives in New York.

It is located in Cape Town’s Bantry Bay neighbourhood and built into a granite bluff that culminates with the Atlantic Ocean 15 meters below.

The team worked around the rocky site and added two terraces into the hillside, making an eight-metre descent to a new outdoor swimming pool easier.Related storyGlazed corners peel back to allow sea breezes into Malan Vorster’s Cape Town house

These patios provide areas to lounge and eat outside alongside the home’s entrance, which is covered by an overhanging roof lined with thatch on its underside.

The home’s original orientation was also reconfigured as part of the project.

A new entrance was added to its west side, as opposed to the north, and large windows were added on the west and south sides to provide more expansive views.

Inside, the team tore down existing walls to create more spacious, light-filled areas.

The interior walls are all painted white to complement this, and floors are either grey stone or painted white, further creating a uniform feel across the home indoors and out.

Shades of blue and green found in the bathroom tiles and painted ash wood cabinets in the kitchen provide contrast to the neutral interiors and also a connection to the lush surrounds.

In the kitchen, there is also an island covered in white, geometric tiles by Tabarka Studio.

Upon entering the home is a living room with a corner window, fireplace and a blue couch custom-made for the project.

An eclectic mix of designs from all over Africa features across the project, including a grass rug from Swaziland with a red Berber rug from Morocco layered on top in the sitting area.

Icaria House has five bedrooms, all of which have en-suite bathrooms and balconies.

Other homes in Cape Town are Malan Vorster’s Clifton House, a remodelled cottage by Liani and Jan Douglas and a contemporary residence by SAOTA.

Photography is by Elsa Young.Read more: