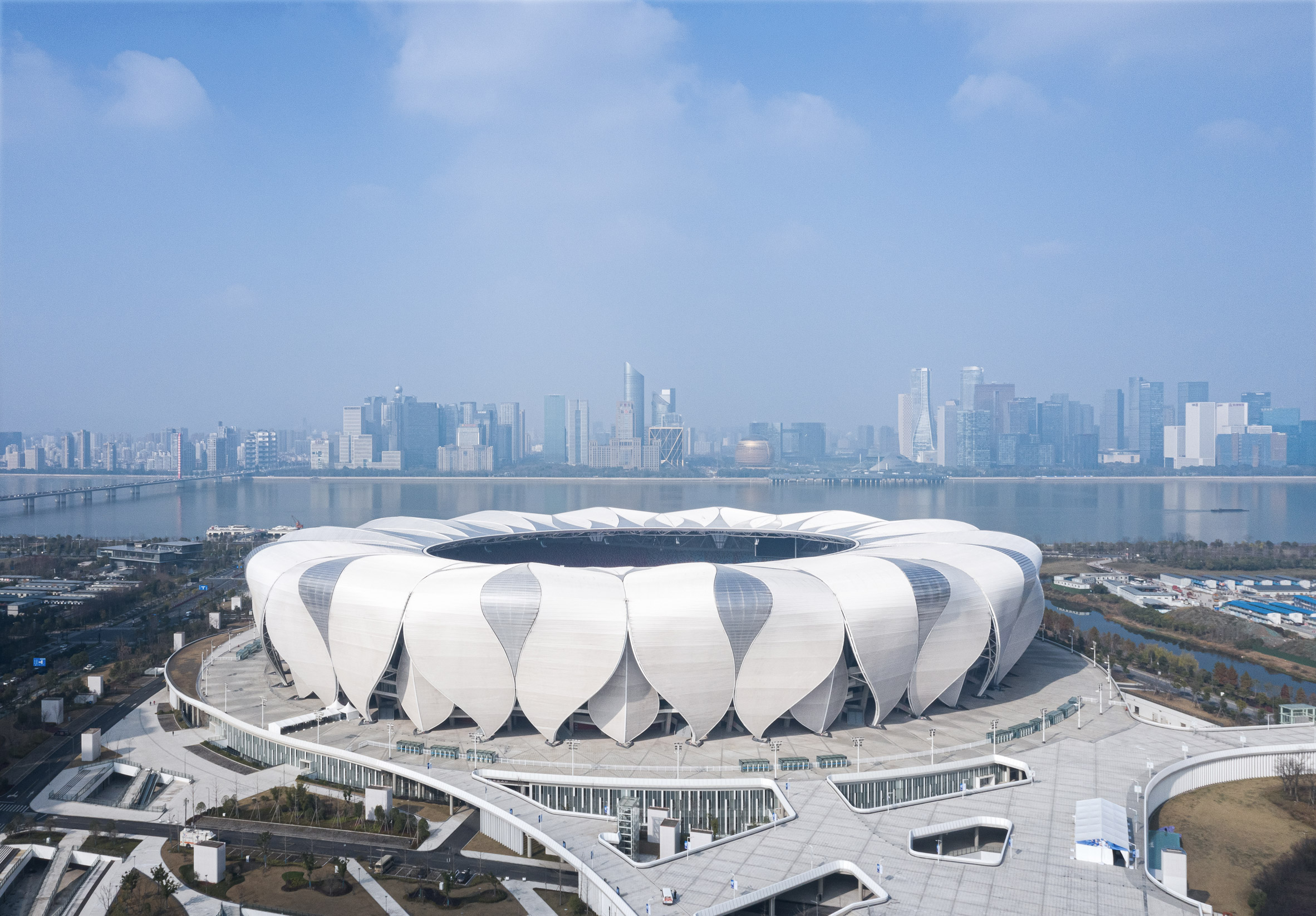 Written for Dezeen by Lizzie Crook |

Petal-like cladding wraps around this 80,000-seat stadium, which forms the centrepiece of NBBJ’s riverside Hangzhou Olympic Sports Center in China.

The 400,000-square-metre stadium is designed to evoke the lotus flowers found in the West Lake, a UNESCO World Heritage Site in Hangzhou that is celebrated for its gardens and temples.

It is teamed with series of smaller sporting facilities in the Hangzhou Olympic Sports Center, also designed by NBBJ, including a complementary 10,000-seat stadium dedicated to tennis.

“Hangzhou is one of the most scenic cities in China, and its West Lake is renowned for its beauty, elegance and unique foliage,” NBBJ told Dezeen.

“The stadium draws upon this beauty by using the indigenous water lily, also called a lotus, of the West Lake as its conceptual inspiration, and then interpreting the form into a series of modular petal structures that gracefully surround the stadium.”

The complex’s main stadium is primarily used for football matches, however it was designed to be flexible so that it can host a range of sports events including the 2022 Asian Games.Related storyAl Wakrah Stadium built by Zaha Hadid Architects for World Cup in Qatar

It is built primarily from steel, with exterior facades and roof structure that were computationally-designed by NBBJ using parametrics. This was to ensure the building was as light as possible, and in turn reduce material waste and the building’s carbon footprint.

NBBJ has landscaped the area surrounding the stadium with light-coloured surfaces and areas of greenery.

This landscaping weaves throughout the site to unite the main stadium with the rest of the complex, and is hoped to help reduce water run-off and prevent the urban heat island effect. An urban heat island is a metropolitan area that is made significantly warmer than its surroundings due to the modification of land surfaces.

Hangzhou Olympic Sports Center forms part of the masterplan for the new Central Business District on the south side of the Qiantang River, and is hoped to become a community and recreation hub.

The site has been developed to ensure it is open and accessible during non-game days, and therefore is complete with a number of retail spaces in addition to the sports facilities.

NBBJ is an American architecture firm founded in Seattle in 1943 by Floyd Naramore, William Bain, Clifton Brady and Perry Johanson. Today it has has several studios across North America as well as in Hong Kong, London, Pune and Shanghai.

Other recent projects by the practice in China include a “vertical campus” for Tencent’s headquarters in Shenzhen, and the Nanjing exhibition centre that features a peaked roof to evoke mountains.

A booming construction scene in China has led to the rapid development of cities across the country in recent years.

Last year saw more skyscrapers over 200-metres-high built there than any other country – accounting for 45 per cent of the global total. This included Kohn Pedersen Fox’s 400-metre-high supertall skyscraper in Shenzhen, and Zaha Hadid Architects’ Leeza Soho with the world’s tallest atrium.