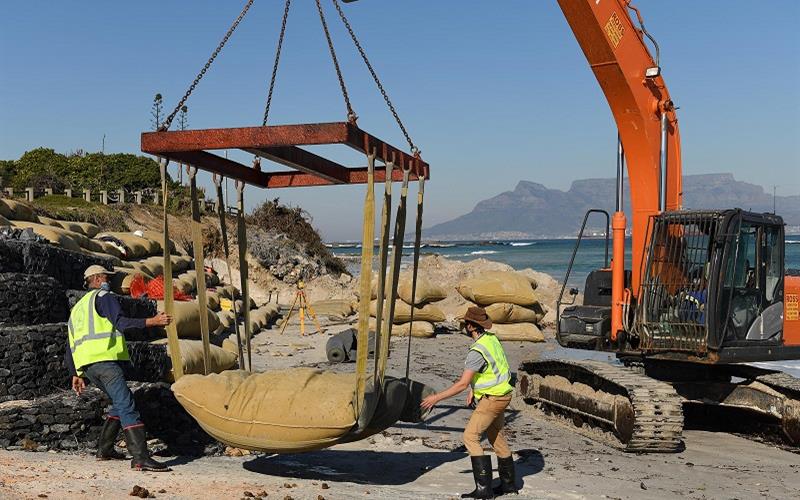 The City of Cape Town recently commenced with an emergency intervention at the Big Bay and a portion of the Small Bay beachfront to replace a gabion revetment structure which had collapsed, with a suitable alternative revetment system to protect the embankment of the stretch of coastline between the south of Big Bay up to the northern end of Small Bay. Construction commenced on 22 May 2020.

This coastline has been severely impacted by storms since 2017 and as a result, the gabion revetment protecting the embankment collapsed. The structural condition of the existing gabion structure could not be repaired, therefore an emergency repair intervention was required to prevent further excessive damage to the embankment. This specific embankment supports a walkway between the two bays as well as underground municipal infrastructure.

The geo-container revetment structure, currently being constructed, will protect the public pedestrian walkway and sewage line from damage during future storm events and ensure the usability and safety of the new walkway adjacent to the new coastal revetment during normal sea conditions. This revetment system comprises of sand-filled geo-containers, specially developed for the marine environment, built to form a stabilising, defensive barrier against coastal erosion.

‘The City’s Coastal Management team and contractor has progressed very well with the construction of the new revetment structure. The protection of this fairly exposed stretch of coastline is critical for this area and I believe that this is an effective and sustainable defensive solution, especially considering the intricate nature of this location. The team has done exceptionally well despite unfavourable weather and sea conditions,’ said Alderman Marian Nieuwoudt, the City’s Mayoral Committee Member for Spatial Planning and Environment.

Over the past month, the contractor has been removing the old collapsed gabion structure and replacing it with the new stepped geo-container structure. To date, approximately 357 geo-containers have been placed on the southern section of the site with another 78m (comprising of approximately 600 geo-containers) of the structure to still be constructed.

‘We ask that residents remain patient as we work towards completing the project. Once the structure has been completed, the pathway between Big Bay and the De Mist parking area will be reinstated. If all goes according to plan, we expect to complete the works by the end of July,’ said Alderman Nieuwoudt.