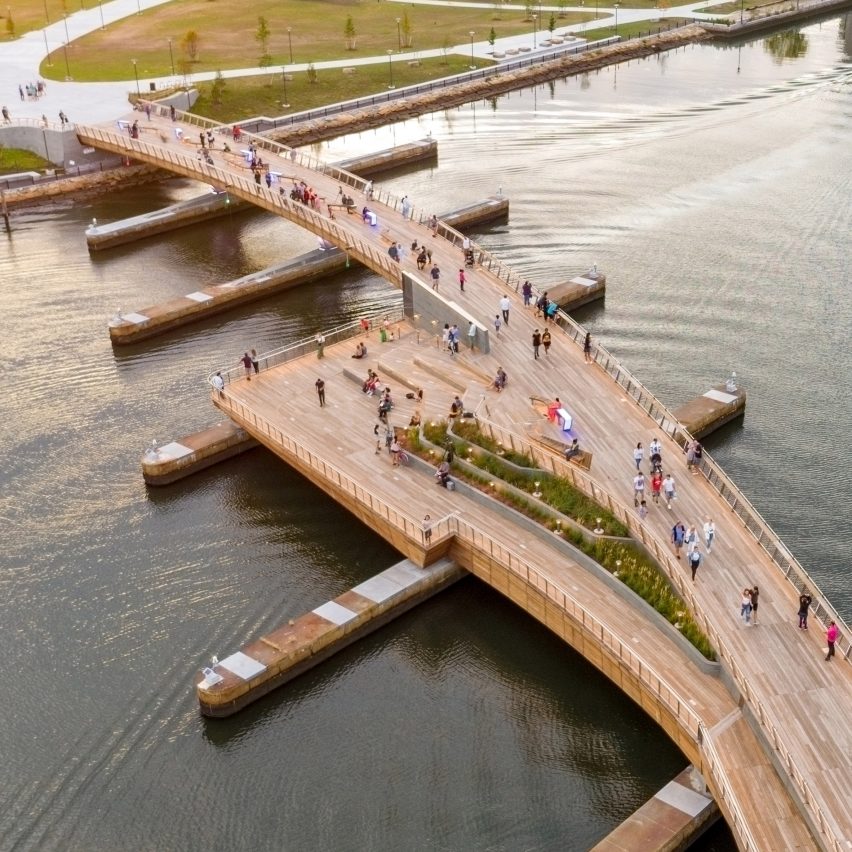 Built with a steel superstructure, the curvaceous form is clad in modular panels of Wana wood, also known as Red Louro. In addition to its durability and resistance to rot, the South American hardwood was chosen for its use in boat building in order to evoke Providence’s maritime past.

Detroit’s Inform Studio, which worked with global engineering firm Buro Happold on the project, said the wood has “old-world character and warmth”.

“With modern innovations, this exceptionally versatile material was used to capture formal characteristics reminiscent of historical ships while simultaneously transitioning into an innovative contemporary solution,” it added.

Inform Studio also collaborated with Brooklyn-based SITU Fabrication to develop the modular panels of the wood, which wraps both sides of the bridge like a curved shell. The exterior comprises 250 demountable panels. Wood is also used for benches and the floor.

“Using parametric tools to develop the internal structure for each panel, the team was able to modularise the larger system for efficiency while preserving the unique form and outer surface curves,” said Inform Studio.Related storyRISD students use standard greenhouse parts to build outdoor performance venue

The prefabricated design was chosen to help with long-term maintenance, and enable access to the steel structure if needed. “The result accelerated the production schedule and reduced material waste and costs,” it added.

The bridge’s form is stepped to create a lower level that is closer to the water. It faces south and features plantings and wide steps that double as seating. On the east side of the bridge, a pathway splits in directions towards James Street and Transit Street.

The west side of the bridge joins a 4.5-acre (1.8-hectare) green space and Providence’s Innovation and Design District, a development underway by Wexford Science and Technology and includes a new building, Point225, that houses Brown University’s School of Professional Studies.

Inform Studio and Buro Happold designed the structure in response to a competition held by the Rhode Island Department of Transportation (RIDOT) and the City of Providence in 2010.

The contest called for a link between two new parks that were created as a part of the wider Iway project, which involved removing and relocating an intersection of two highway interstates.

“As a part of the Waterfront Park Master Plan, the Providence River Pedestrian Bridge had a significant responsibility to unify the East and West Park spaces into an integrated public environment synthesising both urban and natural conditions,” said Inform Studio.

Providence River Pedestrian Bridge is part of a number of bridges that connect the downtown area of the city, which is the capital of US state Rhode Island.

The city is also home to the well-known design college Rhode Island School of Design (RISD). Many of its alumni have created studios and workshops in the local area.

Photography is by Steve Kroodsma.