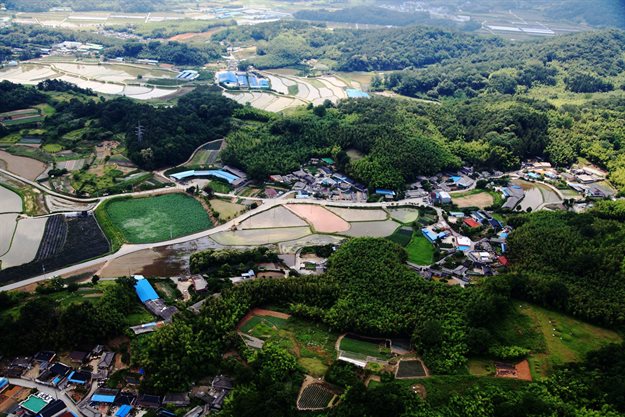 The Republic of Korea’s Damyang Bamboo Field Agriculture System, a traditional farming system in Damyang, has been recognised as a Globally Important Agricultural Heritage System (GIAHS), a designation managed by the UN Food and Agriculture Organisation (FAO).

Based on traditional agroecological practices, the site is an example of sustainable agriculture approach linking nature and traditional farming practices while respecting the environment.

Started over a thousand years ago, the system relies on a bamboo-based multilayered organisation of production where tea trees and mushrooms are inter-cropped with bamboos. The landscape management also includes farmlands, vegetable gardens, rice fields and water reservoirs.

Bamboo groves, usually formed at the lower mountainous areas such as on the hilly areas in a valley, provide natural waterways around the fields. In this way, the system ensures the dynamic circulation of water, nutrients and biodiversity providing essential ecosystem services to the local communities.

In addition, a tangle of rootstocks of bamboos prevents the loss of soil from heavy rains or floods, fending off disasters. Thanks to their planting density, bamboo fields form a colony also protecting the villages from the cold winds in winter and the sweltering heat in summer. Thus, the Damyang bamboo cultivation plays an important role in preserving the landscape from soil erosion and violent temperature variations.

The multi-level structure of the Damyang bamboo fields allows farmers to earn good income not only from harvesting bamboo shoots but also from Jukro tea (special green tea), medicinal plants such as broadleaf Liriope and wolfberries (goji berries), as well as special purpose crops including mushrooms, all of which are compatible with bamboo cultivation. Moreover, bamboo crafts have long served as the primary source of the farmers’ livelihoods.

The Damyang bamboo fields’ agricultural system brings about rich agricultural biodiversity. Bamboo trees are selected and cultivated according to the needs of each farmer and are genetically different.

Farmers still depend on traditional ecological knowledge and technique for good management of bamboo trees in the different growing stages including site selection, planting, fertilisation, thinning, trimming and harvesting.