Why is Durban splurging R50m on a sea pier extension? 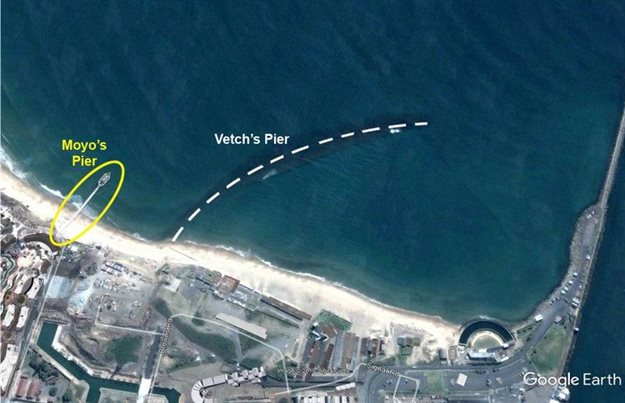 Questions are piling up on why City of Durban officials want to pour R50m of concrete and steel into the sea next to uShaka Marine World at a time when public funds have to stretch even further due to Covid-19.

Last year, the municipality announced plans to extend an existing 140m-long pier by a further 100m, motivating this expenditure on the basis that a longer pier was needed to ensure the survival of sharks, dolphins and other marine creatures at uShaka, the world’s fifth largest aquarium.

Since uShaka opened in 2004 there have not been any reported cases of major illness or death among the priceless collection of marine creatures, which includes more than 70 sharks and rays, several dolphins, turtles and penguins, nearly 5,300 fish and roughly 750 invertebrate species such as corals, jellyfish, molluscs and crustaceans.

And while there is no question that their continued good health is now threatened by declining volumes of fresh sea water needed to flush and replenish the marine display tanks, questions have emerged on whether a multi-million pier project is necessary to ensure their welfare.

For more than 16 years, sea water has been drawn from a network of submerged wells located directly beneath the aquarium pier, but over the last few years concern has been growing that the pier and seawater extraction wells are becoming stranded above the normal sea water level because of excessive sand-pumping next to uShaka and Vetch’s Pier beaches.

For many decades the city and Transnet have been obliged to pump new sand onto Durban’s famous Golden Mile beachfront on a regular basis because the massive piers at the entrance to Durban harbour prevent sand from the southern coastline from being washed northward by waves to replenish beaches depleted by natural coastal erosion.

To remedy this, city engineers built a 3.5km-long sand-pumping scheme on the beachfront in the late 1970s, which includes pipes, pumps and booster stations to shift fresh sand onto the central beaches on a regular basis.

However, repeated media enquiries by this writer over the last two years have helped to expose the fact that Durban’s sand-pumping scheme has been dysfunctional for more than a decade following a three-year project to widen the harbour mouth that ended in 2010.

Responses to these queries revealed that a crucial sand-hopper station was demolished during the harbour widening and it has taken Transnet more than ten years to build and commission a new one – while the City of Ethekwini has also failed to properly maintain its land-based pumping scheme.

The result of the dysfunctional pumping scheme has led to severe shortages of sand along Durban’s central beaches on one hand – and conversely, too much sand pumped in the vicinity of uShaka and Vetch’s Pier on the other.

The situation got so bad in March 2018 that the central beaches were all but washed away and parts of the promenade nearly collapsed from erosion. To solve this crisis, the city spent at least R15m on an emergency ship-to-shore sand-pumping operation along the central beachfront.

But further to the south – directly adjacent to uShaka and Vetch’s beach – so much artificially pumped sand had built up next to the aquarium’s seawater extraction wells that uShaka struggled to suck up enough sea water to flush and provide clean water for the marine display tanks.

Eventually, in March 2019, the city was compelled to come up with a solution to avoid death or illness of marine creatures at the city’s flagship marine theme park.

However, rather than repairing the existing pumping scheme or reducing the volume of sand-pumping around the pier, the city proposed a more expansive solution: extending the pier by another 100m in order to suck up water from further out to sea.

Johnny Vassilaros, a veteran paddle-skier who has been engaged in a long-running battle with the municipality over the social and environmental impacts of the city’s proposed Point Waterfront development, has questioned why the city needs to spend R50m on lengthening the pier when a cheaper and more obvious solution to the aquarium water-supply problem would appear to be fixing the pumping scheme and to stop dumping so much sand in the wrong places.

While the city has conceded that several of its sand pumping stations have been out of action for more than a decade, it has also sought to shift some of the blame to Transnet over sand hopper “teething problems”.

It maintains that the pier needs to be extended for the health of the uShaka marine animals and that there would be additional benefits from upgrading the pier into something more “aesthetically pleasing” to attract more tourists to the promenade and also boost economic development.

According to a draft Basic Assessment Report (BAR) released on 2 July for a 30-day period of public comment, the new double-decker pier will feature a “rare design that is expected to attract people from around the country”.

A plan-view for the new oval-shaped pier depicts a large deck that is 56m-wide and 64m-long (wide enough to serve as a helipad) as well as an area described as “Mandela Place”, suggesting that the new pier may feature a remembrance space or statue of South Africa’s first democratic era president.

This remains speculation at this stage, however, as the city has only released a plan-view of the new pier design, with no side or elevation views provided.

Lisa Guastella, a Durban environmental scientist, consultant and water sports enthusiast says she is concerned about the welfare of the aquarium animals, but fears that the solution proposed by the city is “over the top”.

In written comments submitted to ECA Consulting (the city-appointed environmental impact practitioner), Guastella argues that the pier is “another flagrant waste of ratepayers money” and nothing but a “smokescreen” – possibly to provide cover for building new seafront restaurants and helicopter flip facilities without the requirement for a comprehensive environmental impact assessment.

Guastella says a project of this magnitude requires a full EIA report – not the Basic Assessment Report (BAR) route followed by the city.

She also says the uShaka water intake system appeared to have functioned well for well over a decade and problems only emerged when too much sand was pumped so close to the pier.

Guastella suggests that if the primary objective is to ensure more water for the aquarium, then new pipes and well-points could still be built further out to sea – but without any need for a R50m supporting pier.

In their written responses to Guastella’s comments, city officials insist that there is no need for a full EIA process, but they make no comment on her suggestion that the new pier may incorporate new restaurants or a helipad.

However, the officials suggest that a longer pier is essential because it provides housing for the vertical well intake system.

“It protects the system from bathers and watercraft users and, most importantly, it supports the pipe work for the system along its piles,” the city says.

Senior CSIR marine scientist Steven Weerts has authored a specialist report confirming that the city asked him to examine the environmental impacts of two seawater extraction systems – one that incorporated a pier and a one without a pier.

The alternative, cheaper plan – which did not include a pier – would involve building two horizontal wells 300m offshore. In his report, Weerts says the city did not provide detailed engineering plans for either of the two options, but he noted that underwater pipelines could be installed by a process of “jetting”, in which air and water is used to bury extraction pipes under the sea bed.

“This option does not require the development of any pier extension, but has potential service and maintenance implications for intake operation over the longer term,” says Weerts – contradicting the city’s claim that a pier is an essential feature of the proposed extraction system.

Durban resident Rory O’Connor argues that the easiest and lowest cost option would be to stop dumping so much sand next to uShaka. He also argues that there is no need for a pier, stating that several seawater extraction schemes have been laid along coastlines around the world without the need for large supporting piers.

In the new draft report published this month, the city and ECA Consultants acknowledge that the alternative of an extraction system with no pier was investigated and found to be feasible – but it is claimed in the ECA report that servicing the horizontal wells could prove “extremely difficult and result in a lack of control over the system”.

Overall, the city argues, an extraction system with no pier was considered “less feasible” than the municipality’s preferred option and would also require more maintenance, “thus requiring additional financing” – yet no financial estimates are listed to enable a cost-benefit analysis between the two options.

Finally, the city argues, an extraction system with no pier would require more frequent maintenance and was therefore “considered more detrimental to the environment” over the long term.

Again, this appears to contradict the specialist report finding by the CSIR marine expert Weerts, who concluded that the no-pier extraction option had significantly lower environmental impacts.

In further written comments, Durban resident AGS Yates asks why the city wants to spend so much money on a new pier “especially in a city with so many other more pressing and important requirements”.

“The City of Durban should satisfy all residents and rate-payers that the best, most cost-effective solution to all the present challenges associated with the need for a new sustainable source of clean seawater for the aquarium will be provided. Accordingly, I propose that a public meeting be convened, with the Coastal Engineering Department management present, where all these matters could be raised and resolved.”

The city consultants appear to ignore Yates’ criticism and request for a public meeting in the latest draft report, simply announcing that: “In light of Covid-19, the report and supporting appendices will be distributed electronically for review.”

As the final window period for public comment draws to a close, Vassilaros and O’Connor have drawn the conclusion that there are “hidden reasons” behind the city’s decision to push so strongly for the R50m pier option and a continuation of sand-pumping at uShaka when cheaper and simpler solutions appear to be available.

They suggest the city’s determination to keep pumping large volumes of sand at Vetch’s can be explained on the basis that it wants to shield the new beachfront promenade from sea level rise or severe storms due to climate change – and also to maximise the tourist attraction potential and development footprint for new luxury hotels, shopping centres and elite office blocks planned for the Point Waterfront Development.