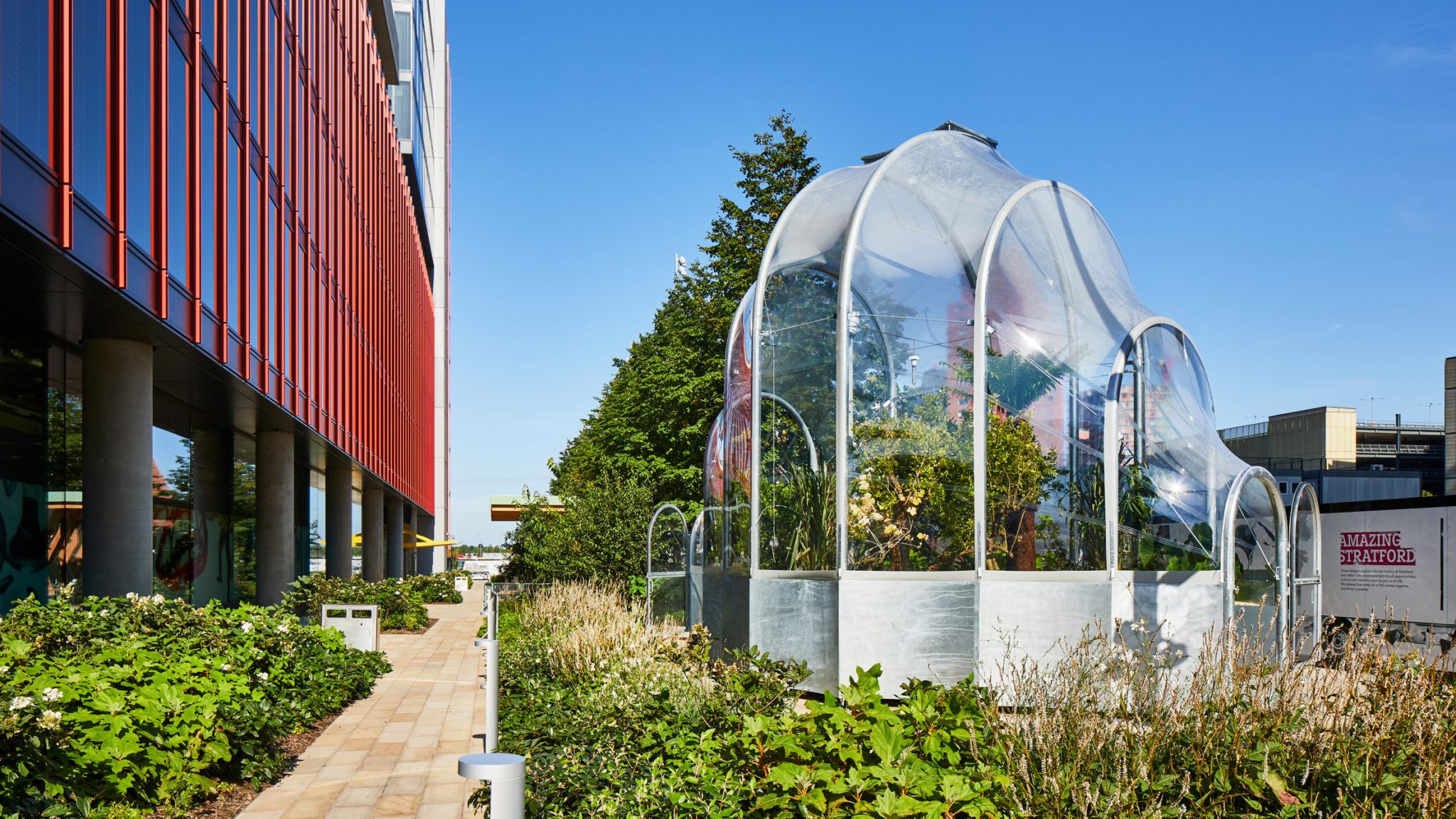 This article was first published on Dezeen. Please click here for full article.

Studio Weave has built an arched greenhouse as part of London Design Festival, which is filled with plants that it predicts will soon be able to grow outdoors in the UK due to climate change.

Named Hothouse, the pavilion was created to draw attention to rising temperatures caused by climate change, which will allow many tropical fruits to be grown outdoors in London in the next 30 years.

“We wanted to talk a little bit about how London is getting warmer,” Studio Weave director Je Ahn told Dezeen. “The idea is to show the types of plants that we will be able to easily grow in our gardens by 2050.”

“It’s not meant to be doom and gloom,” he continued, “it’s meant to remind people of the relationship we have with nature – we want people to engage with the structure and the plants.”

Built as part of this year’s London Design Festival – which is one of the few major design events to go ahead this year after many were cancelled due to the coronavirus pandemic – the greenhouse-like structure is located in Redman Place near the Queen Elizabeth Olympic Park in Stratford.Related storyColourful water-tank pavilion built by Studio Weave beside River Thames

The structure pays homage to the area’s previous history as an edible fruit-growing hotspot.

Its planting was designed by landscaper Tom Massey and includes numerous tropical plants such as guava, avocado, pomegranate, mango, sugarcane and pineapple.

“I live in Homerton, next door to Stratford, and knew that the Lea Valley had the world’s largest density of greenhouses in the 1930,” said Ahn.

“This area supplied a huge amount of exotic fruits, like grapes and cucumbers – that was in my mind.”.

The seven-metre tall structure was made from a series of galvanised-steel arches that are supported by steel tension cables.

“We wanted to create something with an organic feeling that seems to be growing out of the ground,” explained Ahn.

“It has the optimum shape for achieving the climate we wanted; tall in the middle with entrances at either side that allow it to draw hot air up to the top, which can be released if it gets too hot.”

As the pavilion was designed during the coronavirus pandemic, the London-based architecture practice was aware that most people would not be able to go inside, so it needed to be engaging from the exterior.

To ensure this, Studio Weave enclosed the greenhouse with transparent CNC-cut recyclable plastic to make the plants as visible as possible. At night the pavilion is lit up to draw attention to the planting.

“We knew that not too many people would be able to go inside, so we made sure people could engage with the plants from the outside,” explained Ahn.

“We made the covering from the clearest material we could find – it’s a large version of an Edwardian Terrarium.”

Hothouse was built with no permanent foundations and was designed to be demountable. It will remain in Stratford for the next year before being dismantled and moved to an, as yet undetermined, permanent location.

Studio Weave has built numerous pavilions across London. Recently it built a “typical terraced house” to give views over the construction site of a new design district in Greenwich and a colourful water-tank pavilion beside River Thames next to the US embassy.

Photography is by Ed Reeve